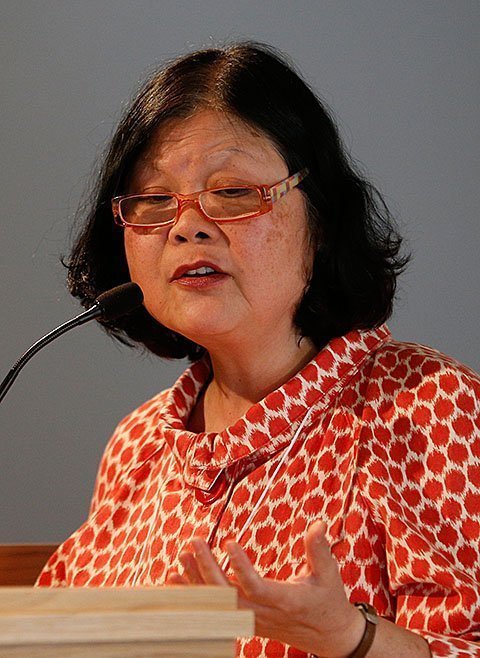 Carolyn Woo, president and CEO of Catholic Relief Services, speaks June 17 in Rome at a conference on impact investing. Top experts in finance and representatives from development agencies and religious charities met to discuss how government, business and church organizations can work together to alleviate poverty and promote the common good.

VATICAN CITY (CNS) — When Pope Francis condemns a "cult of money" and the "dictatorship" of a faceless economy, he isn’t trying to damper entrepreneurial spirit or shutter business.

What entrepreneurs and leaders need, he has emphasized, is having a proper relationship with wealth — that their money serve, not enslave.

Given the pope’s call for a more ethical economy of inclusion, the Pontifical Council for Justice and Peace, Catholic Relief Services and the University of Notre Dame’s Mendoza College of Business held a two-day conference in mid-June to look at how financial markets could respond.

Top experts in finance, including executives of Goldman Sachs and other investment firms, and representatives from development agencies and religious charities looked at how government, business and the church could work together to alleviate poverty and serve the common good.

"Each sector working alone is not enough," in part because government agencies and charitable organizations don’t have enough money to solve today’s social and economic problems, said Carolyn Woo, president and CEO of Catholic Relief Services.

"But just because we ourselves are limited doesn’t mean, therefore, we throw up our hands and go home," but rather look for ways to pool assets and unique capacities, she told Catholic News Service.

Woo served as dean of the Mendoza business school beginning in 1997, and going to CRS in 2012 meant she could use her expertise in business, strategic planning and entrepreneurship in new ways.

The June 16-17 conference specifically looked at working within the current market system through "impact investing," which promotes investing in companies, organizations and funds that will have a positive and measureable impact on communities and the environment, and reap returns for investors.

Besides explaining what impacting investing was, Woo said the conference also studied whether it could serve as a new source of capital for church-run projects.

One idea, she said, could be to help projects the church knows have a positive impact on local communities to get access to investors and funds.

"We could capture private investors and then apply these funds to the right projects," like in Ethiopia, where CRS has helped Bishop Abraham Desta of Meki cultivate a vineyard to produce 8,000 bottles of altar wine a year for the Catholic Church there.

But, Woo said, "he has a lot more potential than that, and it’s good to follow that potential and take it further because it creates a livelihood for his diocese."

Relying on private donations and government grants, "we are generally limited in capital, and the lack of capital prevents serving more people, prevents sustaining the current operations that you have and it prevents innovation," she said.

Innovation requires risk — something markets aren’t adverse to, and if development projects could tap into venture capital, for example, they could experiment with bigger ideas and visions, she said.

Oblate Father Andrew Small, national director of the Pontifical Mission Societies in the United States, told CNS that "as budgets are being cut all around," impact investment "looks like a new source of revenue."

"But it will mean the church will have to demonstrate its real impact on people’s lives and will have to measure that impact," he said.

Projects also will have to "make a profit, and who gets that profit may not always be the poor," he added.

How to measure social benefits and prove them to the satisfaction of investors was a concern of Dominican Sister Helen Alford, professor of social sciences at Rome’s Pontifical University of St. Thomas, known as the Angelicum.

She said in her talk, "Things that really count can’t be counted," particularly given that the church puts a high priority on providing spiritual and emotional care and long-term development.

Studies have shown that too much focus on providing incentives to get people to do good or be socially responsible can "drive out" those who are "doing good just to do good," she said.

She asked whether impact investing, with its focus on "external incentives," like measured outcomes and profit, might "drive out people who have internal motivation" and aren’t looking for reward or profit.

Another concern, she said, is the church’s emphasis on closeness — being close to the people and their individual problems and needs; whereas economic efficiencies demand increasing scale through reaching ever-larger numbers of people.

"We want to scale because many people need services, but not at a cost, the cost of losing our connection" to the people, she said.

Sister Alford, who trained as a manufacturing engineer, told the finance experts "there are big problems in business; that’s why you’re here."

But if the church is going to help business build a "culture that puts the poor and inclusion and serving the poor at the center," it needs to engage with business and dialogue, not demonize.

But while government grants don’t always cover long-term and ongoing needs, Father Snyder said investment partners will need to "stick with us and share the same goals" over the long haul.

Woo said the time is right to tap into today’s asset holders.

Many of them are "baby boomers," she said, who were often active in the civil rights, women’s and labor movements advocating social change. As a consequence, she said many of them "are soul-searching, asking ‘What can we do with our wealth? Did we leave the world a better place?’"

The church and other moral leaders play an important role in inspiring and guiding these men and women, she said, helping them discover new meaning and a different kind of value in their money.