Finding a place at the table - Catholic Courier 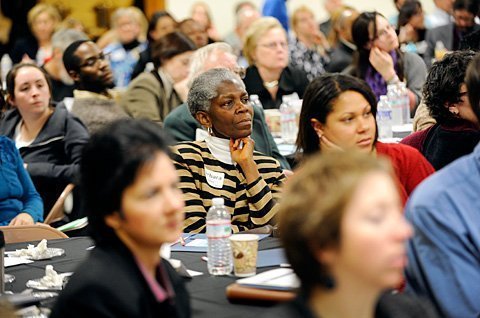 EDITOR’S NOTE: This is the first in a two-part series on racism and racial justice.

Fifty years after Martin Luther King Jr. penned the "Letter from the Birmingham Jail," calling out his brothers in the clergy for not working for racial justice, a group of national religious leaders gathered this spring to write a response and pledge further action against racism.

At the same time, a group of Rochester organizations came together for community conversations on race, sparked by the recent Rochester Museum and Science Center exhibit "Race: Are We So Different?"

As the conversations on race continue throughout the area, the diocesan director of cultural diversity said race is a topic the Diocese of Rochester has been examining closely.

In a recent address in response to King’s 1963 letter, Louisville Archbishop Joseph Kurtz echoed the need for more action against racism. The archbishop was one of several religious leaders to speak in Birmingham, Ala., April 14 and 15 in commemoration of King’s "Letter from the Birmingham Jail," which took to task the religious leaders of the day for not fighting for racial justice.

"This gathering allows not simply a response in writing but also one given in living witness," Archbishop Kurtz said. "Our living witness has three elements. Thus today, we must ask forgiveness for past wrongs, be grateful for words that have already borne fruit, and be resolved for more action."

A multipronged approach to fighting racism also is being pursued in the Rochester Diocese, where about a year ago diocesan offices for various cultural groups were combined into one: the Office for Cultural Diversity, which is part of the diocesan department of Parish and Clergy Services. Lynette Saenz, director of the cultural diversity office, said having one, combined office has allowed the diocese to take a more centralized approach to cultural diversity, since cultural groups are facing many similar issues.

"There were a lot of things happening with each (cultural) group, but there wasn’t a lot of overlapping (among cultural groups)," Saenz said. One example of this new collaboration was a multicultural Mass the office organized in October.

The office aims to educate parish representatives about diversity; expand mission and outreach to various cultural groups; support refugee ministries; and coordinate grassroots leadership commissions of leaders from the largest cultural groups in the diocese: Asian-Pacific, Hispanic/Latino and African-American/black communities. Saenz said each commission is intended to address and communicate the needs of its respective community as well as develop and implement a community pastoral plan.

So far, the Diocesan Pastoral Plan for Hispanic Catholics was released last November, and the diocese is adapting for local use the National Pastoral Plan for Ministry with Black Catholics. A plan for Asian-Pacific Catholics is in the works, and Saenz said additional members are being recruited for the various commissions.

The office also is working to create pastoral plans for such groups as deaf Catholics, who speak a separate language (sign language) and have a distinct culture.

Once pastoral plans are completed for the cultural groups, a top priority of the office will be to promote evangelization and formation opportunities for leaders from the diverse communities in the diocese, Saenz said.

"We want to find out where people are, and develop strategies to reach out and communicate with them, and make sure we know the good stuff happening in our parishes and in our community," Saenz said.

At the parish level, meanwhile, Catholics from diverse cultural backgrounds say people in the pews should be a part of strategies to make faith communities more welcoming.

The homelike feeling she gets at St. Mary Parish in Rochester is the reason why Shirley Cirillo of Walworth drives 20 miles to attend church. She found the parish after trying out several when she moved to Rochester for her neurology residency at Strong Memorial Hospital.

The parish is diverse enough to feel homelike to Cirillo, who is ethnically Chinese and who was raised in the Philippines before moving to the United States 20 years ago. Cirillo, a member of the diocese’s Asian-Pacific Leadership Commission, said she sees it as the duty of every parishioner to be welcoming and hospitable — especially if stranger is sitting in "their seat."

She said she tries to make a point of saying hello to people she doesn’t know, even though sometimes she winds up introducing herself to someone who is not a newcomer but rather a parishioner who normally attends Mass at a different time. But she said the need to create a welcoming parish is worth any temporary embarrassment.

Fear of embarrassment over saying the wrong thing also is one of the reasons people sometimes avoid talking about such issues as race, said Gaynelle Wethers, director of multicultural affairs at Nazareth College and a parishioner at Rochester’s Immaculate Conception Church.

People need to engage in difficult and uncomfortable conversations about race, she said, because not saying anything prevents people from moving past racism.

"It’s OK to be afraid, to be uncomfortable," Wethers said. "We have to move forward."

Wethers grew up in New Orleans where she attended segregated churches, and in the "white church" had to sit in the back. She noted that racial healing happened for her in part because the nuns at her school — who were both black and Catholic — were kind to her and trusted her.

Yet she said she had hoped that by now that the Catholic Church would be farther along the path of integration than it is.

"Our churches are not integrated at all, and that saddens me still," Wethers said.

A national study released in 2011 bears out Wethers’ contention that racial issues still sting in parishes.

The study, which was sponsored by the National Black Catholic Congress and the University of Notre Dame, noted that one in four African-American Catholics perceive racism in their parishes. Of respondents, 31.5 percent said they were uncomfortable because they were the only people of color in their parishes, while 25.9 percent said fellow parishioners avoided them because of their race, 23.6 said that fellow parishioners reluctantly shake their hands, and 24.9 said they have experienced racial insensitivity toward African-Americans from their priests.

Saenz said the Notre Dame study revealed that many wished their churches would acknowledge both their race and their presence.

"By not acknowledging differences, you are unintentionally making people feel like they don’t belong," she said.

Saenz noted that music is one way of ensuring that all feel welcome and of including everyone in their faith.

"It’s really nice when you go to a parish that’s not traditionally Hispanic or African-American or Asian and you hear music that is familiar (to people who are of diverse backgrounds)," she said.

The opportunity to hear worship music from the Caribbean is one of the reasons why Ozzie Hezekiah, a native of Trinidad, assists with the annual diocesan Caribbean Mass, which will take place this year at 1 p.m. June 9 at St. Monica Church, 831 Genesee St., Rochester. St. Monica also will host an evening of Caribbean praise and worship from 7 to 9 p.m. June 7.

Hezekiah, who drives from Greece, Monroe County, to Rochester’s Our Lady of the Americas Church at St. Frances Xavier Cabrini Parish to attend Mass, said he wishes Caribbean Catholic events could happen more frequently than once a year. In the Trinidad of his youth, the Catholic Church was more intertwined with Caribbean culture than it is in American culture, he said, noting, for example, that feast days were national holidays.

"So many Catholics I know from Trinidad come here, and they lose their faith," Hezekiah remarked. "They lose interest."

"If we are going to bring our church alive again, it has to be through our young people and has to be energy and excitement," she said.