You can't get much farther from home for Christmas than Father Lewis Brown did in 1988. That's when he celebrated a Christmas Eve service for fellow servicemen on a Navy ship in the Indian Ocean, more than 10,000 miles from the Diocese of Rochester.

This coming Christmas, 13-year-old Desire Kasinge, his brother, Celestin, and niece, Marguerite, both 10, will be far removed from their native Zambia. Having come to Rochester as refugees in 2010, they've joined in Christmas customs here but say they still miss the family celebrations they left behind.

Meanwhile, Nicolas Gutierrez longs for his loved ones back in Veracruz, Mexico, whom he has not seen since moving to this area to find work more than 10 years ago.

"Christmas, this is really the hardest time for us," Gutierrez said through a translator as he wiped tears from his eyes. "Sometimes you'd like to hug your parents."

These five are among numerous people who will spend or have spent Christmases away from their traditional communities, churches and/or family. Some find themselves in distant lands. Others may be right in their hometowns yet still isolated as patients in hospitals, nursing homes and other health-care facilities, or confined to their residences due to health or lack of transportation. Others are the rural and urban poor, prisoners and foster children.

Many outreach efforts within the Diocese of Rochester seek to provide Christmas cheer for such folks. On Dec. 25, for example, St. Peter's Kitchen in Rochester will continue its tradition of offering a free Christmas Day dinner.

Patty Lorenzen, kitchen director, likened this gathering of impoverished people to the humble circumstances of the Holy Family on the first Christmas. She added that getting a free meal is just "the tip of the iceberg" as to why guests attend the kitchen's holiday dinner, which begins with a community prayer.

"It's mostly because they have no place else to go," she said. "They don’t have any other place to be in community. They come for companionship, for camaraderie, a little bit of peace and joy, a place to belong."

Although he is far from his native land, Gutierrez celebrates community and tradition every Christmas Eve, hosting a gathering for other migrant workers at the Piffard, Livingston County, house where he and his family live. The event includes a re-enactment of Mary and Joseph searching for lodging, as well as a manger scene featuring a figure of the Christ child, songs, food and the exchanging of gifts.

Penny Gardner, a retired diocesan migrant minister who still volunteers to help Livingston County-area migrant families, observed that this gathering is more accessible for participants than are Christmas Masses at area Catholic churches; at Gutierrez' home they are among their own people and there are no language barriers.

Gutierrez and his family have staged the Dec. 24 get-together for the past seven years, noting that it closely resembles their Christmas Eve celebration in Mexico "the way that our ancestors taught us," he said.

"These are our roots. Maybe someday, when our children are grown, they will do the same thing," he added, saying that he expects approximately seven nearby families to come to the gathering later this month.

Desire Kasinge likewise has fond memories of his family's Christmas traditions in Zambia.

"We would have a party. We would go to church, then get home and just celebrate," he said.

He, Celestin and Marguerite, along with several other family members, came to Rochester as refugees from the southern African country in recent years to escape a region of the world marred by fighting, poverty and short life expectancies. The children said they miss their grandparents and other relatives back home, but are eager to again take part in holiday traditions at Rochester's Holy Cross School, where they are among 13 refugee students. Upcoming Christmas activities there will include prayer services, a play and concert, and decorating an Advent wreath. 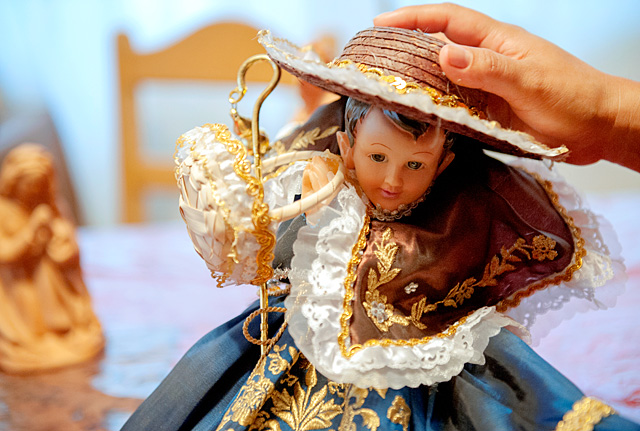 Each year on Christmas Eve, the home of Mexican native Nicolas Gutierrez is the site of a re-enactment of the Nativity, with this figure of the Christ child as the centerpiece.

Marguerite added that she thankful to have loved ones living in Rochester with whom to spend Christmas.

"I like spending time with my family," she said.

Father Brown, on the other hand, was substantially separated from all family in 1988. That Christmas he was serving as Catholic chaplain of the USS Nimitz (CVN-68), which was temporary home to approximately 6,000 Navy personnel in all. Many of them turned out for the Christmas Eve ecumenical service Father Brown conducted along with the ship's Protestant chaplain.

Although the priest -- a Navy chaplain from 1985-2007 -- said it was out of the ordinary for him to be so far from home on Christmas, he remarked that "you had that sense of a family of faith" among the sailors who observed the holiday with him that year. He added that the Navy personnel were noticeably moved by the Christmas hymns, carols and decorations that accompanied the religious service.

"All of that would remind them of home. At Christmas time there's the longing for tradition," said Father Brown, a retired diocesan priest who now resides in Painted Post, Steuben County.

Military members are among the many folks whose jobs demand working on Christmas Day. Among them are Gutierrez, who said he's scheduled to work on Dec. 25 at Thorn Apple Dairy Farm, which is walking distance from his house. Also included in this long list are hospital and health-care facility employees, police officers and other security personnel, media members, convenience-store employees, emergency personnel and hotel employees, to name a few.

For priests, parish staff members and others in ministry, meanwhile, Christmas can be among the busiest work days of their year. Lorenzen noted that she'll oversee dozens of volunteers on Christmas Day to serve a sit-down dinner for approximately 125 guests of St. Peter's Kitchen, which is located on the campus of the former Ss. Peter and Paul Church on Rochester's west side.

"The first couple of years I thought, 'Oh, I have to give up my Christmas.' Then, after that, I realized this is my Christmas," Lorenzen said, explaining that she feels the spirit of the holiday more by working at the kitchen than being anywhere else that day.

Lorenzen said volunteers willingly assist on Christmas -- as well as for a Thanksgiving Day dinner at St. Peter's Kitchen -- by rearranging their church and home schedules, potentially missing portions of family events, in order to be available for 10:30 a.m. to 2 p.m. duties. Elsewhere in the city, Bishop Emeritus Matthew H. Clark traditionally devotes his Christmas morning to celebrating Mass for inmates at the Monroe County Jail; he will do so again this Dec. 25 with a 9 a.m. liturgy.

However, Walker emphasized that ministry of this sort need not be a formalized process. She suggested that anyone, while visiting loved ones at such facilities, can take time to say hello and Merry Christmas to other residents -- especially those who appear to be all alone. Perhaps, she added, visitors could sing Christmas carols for residents, or ask them about their cherished memories of Christmases past.

"This could be the best Christmas present for them, these simple little conversation starters," she observed.

Walker said reaching out to the isolated is an important activity all year long, but might not readily come to mind during a season marked by rushing around. The key, she said, is to gear down and focus -- "that whole thing of people being able to see the need, to take time."

Christmas remembrance of this sort doesn't necessarily have to be face to face, as evidenced by numerous efforts in parishes and Catholic Charities agencies to donate food, clothing, toys and other gifts for those in need. Cash support, meanwhile, comes through such efforts as the Catholic Courier/Catholic Charities Christmas Appeal. Walker further noted that St. Kateri Parish youths are conducting a card-sending campaign this Christmas for young patients at Golisano Children's Hospital in Rochester.

Speaking of cards, Father Brown experienced a memorable initiative during 1988 on the Nimitz. He noted that somebody had written to "Dear Abby" to point out that the sailors would be on the Indian Ocean over the holidays, so Christmas wishes from the public would be appreciated. The letter was published, with significant results.

"We were inundated with Christmas cards," Father Brown said, laughing.

He added that one piece of correspondence had far-reaching effects. It was from a young woman and addressed to the ship's Catholic chaplain, requesting that an additional enclosed letter be given to a serviceman of Father Brown's choice who was a practicing Catholic. The priest dutifully did as told, passing on the note -- without knowing its contents -- to a young sailor who attended daily Mass. A few years later, he learned that the serviceman had responded to the woman's letter and they'd kept in touch and eventually met. How did he find this out? They were getting married, and the sailor had contacted Father Brown to ask him to perform the nuptials, which he did on Long Island.

"I was flabbergasted to receive the invitation. It was kind of the Lord working in mysterious ways," Father Brown remarked.