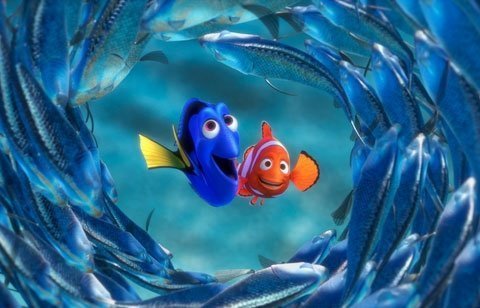 NEW YORK (CNS) — A timid tropical fish embarks on a harrowing journey across vast stretches of treacherous ocean to rescue his lost son in the delightful animated adventure "Finding Nemo 3D" (Disney), now rereleased in 3-D nine years after its debut in multiplexes.

With beautiful underwater landscapes and a solid cast lending their voices, director Andrew Stanton creates an enchanting fable about courage, self-sacrifice and the power of love to overcome insurmountable odds.

Marlin (voice of Albert Brooks) is an overly protective clown fish trying his best to raise his only son, Nemo (voice of Alexander Gould), in the relative safety of Australia’s Great Barrier Reef. But even the security of their plush sea anemone home is not without hazards — a reality Marlin is all too mindful of, having lost Nemo’s mother and siblings to a coral predator.

On the first day of school, the runtish Nemo finds himself the brunt of classmates’ jokes. Egged on by dares and desperate to be accepted, the impetuous minnow turns a deaf gill to his father’s warnings and swims beyond the reef’s "drop-off," and out to the open sea to investigate a boat. Before Marlin can reel him in, Nemo is netted by a scuba diver and motored off, leaving Marlin helpless in the boat’s wake.

Befriended by an absent-minded fish, Dory (voice of Ellen DeGeneres), the skittish Marlin takes off into the unknown in search of his son.

Nemo lands in a fish tank in a dentist’s office overlooking Sydney’s harbor, populated by an assortment of kooky tropical fish including the gang’s scarred leader, Gill (voice of Willem Dafoe), who’s itching for a prison break. Nemo has been marked as a birthday present for the dentist’s niece — a rambunctious toddler whose last "gift" ended belly-up and sleeping with the, uh, fishes. Nemo’s plight sparks Gill to plot a daring escape.

Meanwhile, the aquatic odd couple of Marlin and Dory continue their odyssey, with menacing sharks, ravenous gulls, forests of deadly jellyfish and other dangers of the deep standing — or swimming — in their way. But not even the tiny fish’s whale-size heart can guarantee a happy ending or prevent his chances of ever finding Nemo and saving him from being, literally, flushed down the drain.

The film’s real scene-stealers are the trio of bumbling sharks, Bruce, Anchor and Chum (voices of Barry Humphries, Eric Bana and Bruce Spence), who have formed a 12-step program aimed at changing their image as mindless eating machines to friendly ocean neighbors — their support group’s motto is "Fish are friends, not food." Though the toothy critters supply the biggest guffaws, their gaping jowls may prove scary, especially for young children.

The sequence which finds Marlin and Dory literally making a leap of faith inside a whale echoes the biblical story of Jonah — as well as the Disney classic "Pinocchio" — hinting at the necessity of surrendering to the will of God in times of despair.

In the absence of a traditional Disney villain, the ocean itself takes on a pivotal role, offering both breathtaking beauty and unfathomable danger.

While some viewers may favor more traditional animation techniques, "Finding Nemo" elevates computer animation to a new level of fluidity, improving on early Pixar offerings like "Toy Story" and "Monsters Inc." The underwater environments created are visually stunning, ranging from the richly textured color-gardens of the Great Barrier Reef to the more muted, almost impressionistic, palette of the ocean expanses.

And while Disney’s never-saw-a-heartwarming-plot-that-couldn’t-be-exploited-and-merchandised attitude is to be frowned at, audiences will find it hard not to applaud this whale of a tale.

DiCerto is former staff critic with the U.S. Conference of Catholic Bishops’ Office for Film & Broadcasting.