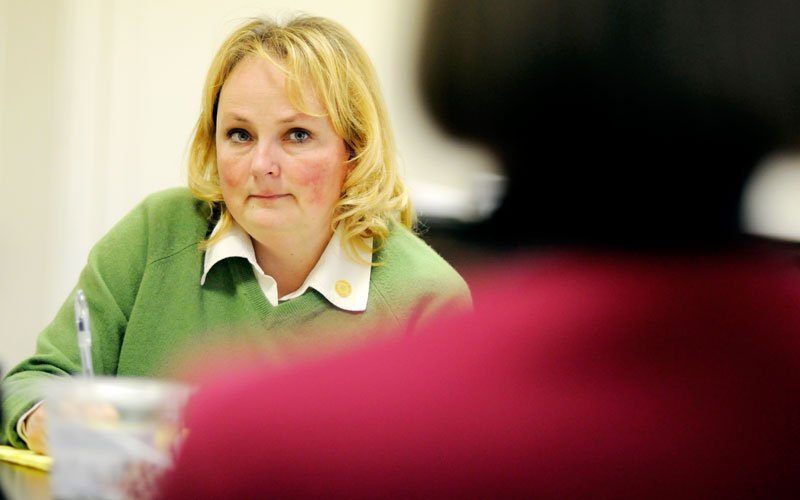 When Ellen Wayne heard Catholic Charities of the Finger Lakes was searching for a new executive director, she thought the job sounded like a perfect fit for her and decided to apply. The organization’s board of directors apparently agreed, and 15 months after being hired, she still thinks the organization is a perfect fit.

“It’s really where my interests lie, and I feel like what I do has a potential for greater impact,” Wayne told the Catholic Courier in December.

A native of Elmira, Wayne grew up in a Catholic household and attended Our Lady of Lourdes and St. Patrick schools in her hometown before enrolling in Elmira Notre Dame High School. After high school Wayne went on to the University of Scranton, a Jesuit school in Pennsylvania, where she received her bachelor’s degree. She later earned a master’s degree in public administration from SUNY Brockport.

After graduating from college Wayne joined a volunteer corps and immediately fell in love with the work of serving those most in need. This sparked an employment trend that Wayne would follow for more than 15 years.

“I’ve been working with nonprofit organizations since the early 1990s, first at a Community Action Agency for Seneca and Cayuga counties, then at the Department of Social Services (in Seneca County),” Wayne said.

Wayne also worked in the development offices of Action for a Better Community and the Rochester Philharmonic Orchestra before coming to Catholic Charities of the Finger Lakes for a position she felt would utilize all her talents, skills and experience.

“It was a great opportunity to combine my experience with my faith and be able to work in a faith-based organization that represents beliefs that I was not only familiar with but buy into, as well as a geographic area that I’m familiar with,” Wayne said.

Although Catholic Charities of the Finger Lakes is a faith-based organization, it serves anyone and everyone in need regardless of religious affiliation. The organization’s clients seem to understand that and come from all walks of life and various religious backgrounds, Wayne said.

“People we most want to understand that are those looking for a worthwhile organization to support,” she said.

Catholic Charities of the Finger Lakes thrives on community support, she added. These tough economic times present a challenge as the organization learns to rely less on governmental grants and support and more on support and resources from the community, and so far the communities in its coverage area of Ontario, Seneca, Cayuga and Yates counties have responded generously, Wayne said.

“I really believe the people really value what we’re providing, and because of that they’ve increased their level of financial support for the organization,” she said. “We have a tremendously supportive community in terms of the willingness of people to volunteer.”

For example, hundreds of volunteers support and staff the organization’s Geneva Community Lunch Program each year, she said.

The lunch program is attractive to many volunteers because it doesn’t necessarily require a long-term commitment, Wayne noted. Volunteers may sign up to help out regularly on a rotating schedule if they wish, or they can commit to helping on just one day.

Volunteers interested in a long-term commitment might be interested in the organization’s Court Appointed Special Advocate, or CASA, program. Volunteers involved with this program become advocates for children involved in the family-court system. After completing a rigorous application process, which includes a background check, these volunteers then go through an extensive training and court-observation process, after which they’re sworn in as court-appointed special advocates, Wayne said. These advocates typically have one case at a time, since each case can require a 12- to 18-month time commitment.

The organization is always looking for volunteers to help out with everything from answering phones and helping clients complete applications to serving on committees or as board members, Wayne said.

“To the extent that somebody expresses a willingness to help us out, more than likely we can find something for them to do to help us in our mission,” she said.