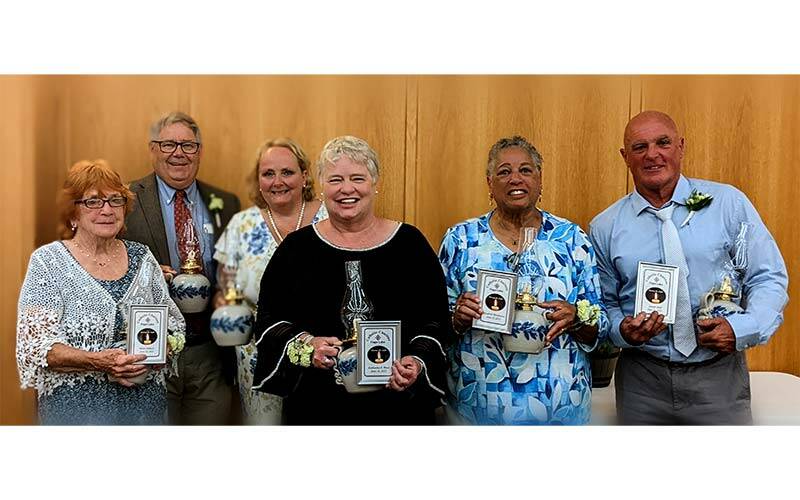 The six recipients of this year’s Sharing the Light Award come from a wide variety of professional backgrounds, yet they all share one trait, according to Deacon Peter Dohr.

“This year’s honorees are each a positive example of human kindness and service,” said Deacon Dohr, executive director of Catholic Charities of the Finger Lakes. “They are generous, compassionate and have proven their commitment to make our Finger Lakes region better.”

Award given to those who are devoted to bettering their communities

Helen Delaney, Elizabeth Kenney Henderson, Joseph Mull Sr., Andrew Tyman, Katharine S. Waye and Ellen T. Wayne are the recipients of the 2022 Sharing the Light Award. Catholic Charities of the Finger Lakes presents the annual award to residents of Wayne, Ontario, Yates, Cayuga and Seneca counties who devote their time and energy toward bettering their communities. The agency, which serves individuals and families in those five counties, established the award in 1995.

The 2022 recipients received their awards during a June 21 dinner at Hobart and William Smith Colleges in Geneva.

“This event allows an opportunity for us to take time to recognize their historic hard work, caring and dedication, and to share some experiences of the good work being done across our communities,” Deacon Dohr said.

Delaney hails from the Cayuga County town of Throop. She studied at Catholic elementary and high schools in Auburn and later taught at St. Mary and Holy Family schools in Auburn, as well as the Union Springs Central School District, and is listed in the Who’s Who Among America’s Teachers.

An active member of Auburn’s Holy Family Parish, Delaney said she feels blessed to be able to serve as an extraordinary minister of holy Communion. She also has volunteered with other organizations, including a soup kitchen and Auburn’s Chapel House homeless shelter, and recently helped collect items for the relief efforts in war-torn Ukraine.

A Geneva native, Henderson is a lifelong member of Trinity Episcopal Church and has been involved in many of the congregation’s ministries and activities. She studied at Rochester Institute of Technology, Eisenhower College in Seneca Falls and Finger Lakes Community College, where she later taught for six years.

Henderson founded the Geneva Center of Concern and served on its board of directors for 45 years. She has been involved with numerous local organizations, including Family Promise of Ontario County and the Geneva Community Lunch Program. She was the first female to coach a local Little League for boys and also coached for girls’ teams, and served on several local scholarship committees.

A fixture in the Waterloo community, Mull is a longtime member of St. Francis and St. Clare Parish and serves as an usher at St. Mary Church — one of the parish’s two worship sites — every Sunday morning. He often transports senior citizens to church, and brings Communion to homebound parishioners and those in nursing homes. Mull also works on the annual parish festival and coached Catholic Youth Organization basketball teams when his three sons were younger.

Mull frequently helps with St. Francis and St. Clare’s building-maintenance needs, which is a good fit, as he has owned his own contracting company for 30 years. He also has served on the Waterloo Town Board and is in his 14th year as the town’s highway superintendent.

A Knight of Columbus and CEO of Geneva Housing Authority: Andrew Tyman

In September, Tyman will retire from a 43-year career with the Geneva Housing Authority, where he has served as CEO since 1999. Under his leadership, many major projects were completed, including the redevelopment of the former St. Francis School into apartments. He also has served in leadership roles in state and national organizations for the directors of public housing authorities.

A longtime member of Our Lady of Peace Parish, Tyman also is a fourth-degree Knight of Columbus. He also is a member of Geneva’s Nestor Hose Fire Co., as well as the Salvation Army of Geneva’s advisory board and the local chapter of the NAACP.

A Penn Yan native, Waye has worked at Keuka College since 1997 and currently serves as the college’s director of community relations and events. She frequently coordinates community-service projects involving Keuka College and the local community. She also is cochair of the Yates County Chamber of Commerce’s board of directors and is a member of the Yates County Housing Council. Waye also sits on the boards of directors or committees of several other local organizations.

Waye volunteers at fundraising events for the Keuka Comfort Care Home as well as Yates County 4-H events. She belongs to Our Lady of the Lakes Catholic Community and frequently volunteers at St. Michael School in Penn Yan.

Wayne served as the commissioner of Wayne County’s Department of Social Services from 2019-22 and currently is CEO and executive director of Catholic Charities of the Diocese of Palm Beach in Florida. She previously served as executive director of Catholic Charities of the Finger Lakes from 2007-19, and before that had served in leadership roles at the Cayuga Seneca Community Action Agency and in fund development for the Rochester Philharmonic Orchestra and Action for a Better Community in Rochester.

Wayne holds a master’s degree in public administration from SUNY Brockport and a doctorate of education in executive leadership from St. John Fisher College, where she has been an adjunct faculty member since 2014. She is an active member of St. Michael Parish in Newark, where she sings in the choir and cantors. Wayne also has been involved with a number of community organizations and initiatives, such as the United Way Women’s Leadership Council and Family Promise of Ontario County.