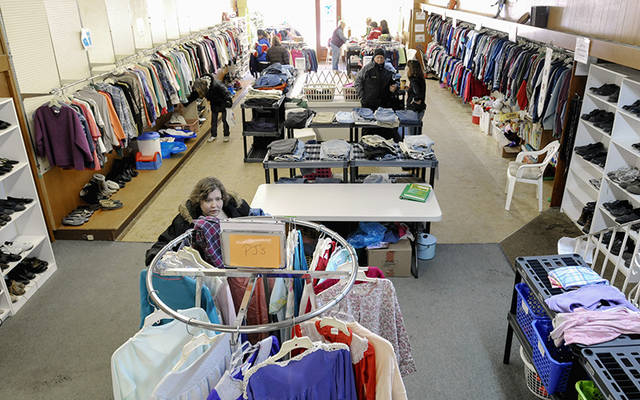 When the COVID-19 pandemic took hold in New York state last spring, the Geneva Community Lunch Program and the Community Clothing Center in Wolcott, which each year help thousands in Ontario and Wayne counties, respectively, each had to pivot substantially and change their distribution models in order to continue to safely serve those in need.

Both the clothing center and the lunch program have faced daunting situations in recent months, yet still have continued to serve those in need, thanks in large part to the generosity of others, he said.

“People’s charity has grown along with the challenge, and that is something that we’re really grateful for,” Deacon Dohr said.

Those who donate to the annual Catholic Courier/Catholic Charities Christmas Appeal are among the generous people to whom Deacon Dohr is referring. The appeal, now in its 51st year, raises money for the emergency funds of various Catholic Charities and affiliated agency’s throughout the Diocese of Rochester’s 12 counties. Catholic Charities of the Finger Lakes and Catholic Charities of Wayne County’s respective portions of the proceeds of the 2019-20 appeal, which raised just more than $39,800, have been extremely valuable as the agencies seek to meet the increased demand for their services coupled with the new protocols they have to follow, Deacon Dohr said.

For years the clothing center, operated by Catholic Charities of Wayne County, had been a place where people could drop off clothing donations. Those in need, meanwhile, could enter the center, browse the racks of neatly sorted clothes and take what they needed at no charge. In a typical year, the center would distribute more than 30,000 articles of donated clothing as it served an average of 3,000 individuals, Deacon Dohr said.

Last spring, however, the clothing center stopped accepting clothing donations on-site and also stopped allowing people inside the facility to “shop.” Currently, donations are accepted at Catholic Charities of Wayne County’s office in Newark, while people who need clothing are encouraged to call the agency’s office to request clothing, which then will be delivered, Deacon Dohr explained.

“We have limited hours and certainly more limited donations due to COVID, but we are still helping people,” he said.

Over in Ontario County, the Geneva Community Lunch Program, which is the result of a partnership between Catholic Charities of the Finger Lakes and the Geneva Interfaith Council, stopped serving meals inside the Geneva Methodist Church last spring and instead began distributing prepacked meals to go.

“Even though we’re not (serving) people inside the building, the number of folks that we’re serving with to-go food and bagged lunches has almost tripled since COVID started. It mushroomed like crazy this past year,” Deacon Dohr said, noting that this new delivery model has presented a financial challenge. “Take-out containers were never budgeted for before, but now they’re a real expense for us so we can increase the numbers that we’re able to be serving.”

Proceeds from the Christmas Appeal are especially valuable in such instances, and likely will continue to become even more valuable in the near future, Deacon Dohr said.

“We’re also anticipating the need to grow through the winter, as things start to become more and more challenging over the next few months,” he said. “We’re gearing up for that, and we’re anticipating that and trying to get ourselves ready, so as the need grows our ability to meet that need grows as well.”