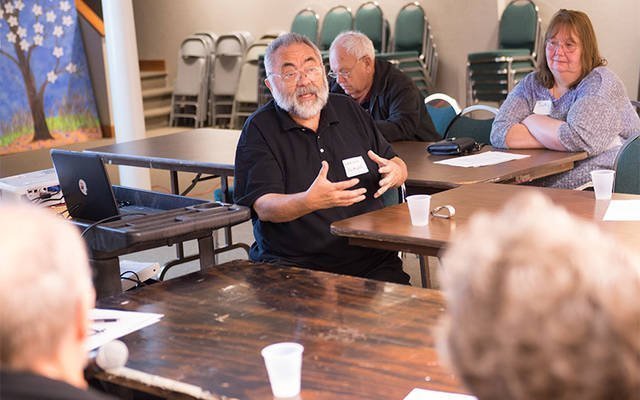 When Jeff and Stacey Gibbs’ newborn son, Simon Peter, passed away after being born prematurely last February, a volunteer from St. Benedict Parish drove to the hospital in the middle of the night. Bob Cownie sat with the Gibbs, who also belong to St. Benedict, and provided them with some measure of comfort and support.

“Bob didn’t say much, nor did he need to,” Jeff Gibbs recalled. “In the midst of suffering and loss, Bob’s presence was a reflection of God’s love for us.”

Cownie’s witness inspired the Gibbs to find their own way to reflect God’s love for others, so they were excited when they learned St. Benedict is preparing to start a Stephen Ministry. Through Stephen Ministry, trained laypeople provide Christian care on a one-to-one basis to individuals in crisis.

“It is not just the responsibility of priests or deacons to reach out to our brothers and sisters in need. We are all called to serve others as Christians. Accompanying others who are experiencing hard times is also a way for us to honor our son, Simon,” Jeff Gibbs explained.

Stephen Ministry began in 1975 in St. Louis, Mo., and has since spread throughout the world. Lay caregivers, called Stephen ministers, are trained using the Stephen Series, and thus far more than 600,000 people from all 50 states as well as 30 other countries have been trained as Stephen ministers, according to Stephen Ministries St. Louis. This not-for-profit, nondenominational organization has a 40-member staff and provides support for the 13,000 congregations — including several within the Diocese of Rochester — that offer Stephen Ministry.

St. Benedict Parish’s staff recently decided the time was right for the parish to start a Stephen Ministry. The parish, which has worship sites in Canandaigua and East Bloomfield, has been seeking new ways of addressing its needs, according to Deacon Claude Lester, who coordinates St. Benedict’s social ministry and sacramental preparation.

“We’re ‚Ä¶ wanting to, in a very concrete fashion, allow the baptized to take on their role as leaders in the community,” Deacon Lester said, noting that he and other staff members don’t have time to meet individually on an ongoing basis with all of the people who need them. “We’re there at the time of the emergency, the time of the crisis, but people’s needs are ongoing, and that’s where Stephen Ministry can really provide ongoing access to the healing power of Jesus Christ.”

Parishioner John Cosgrove, who plans to become a Stephen minister, hopes the ministry will help alleviate the loneliness that seems to be increasingly prevalent these days.

“It’s important for people to be present to other people, not to solve their problems, but just to be there and listen,” Cosgrove said.

That’s exactly what fellow parishioner Mary Whalen plans to do after she completes the training.

“There’s tremendous need. I probably in the last week ran across five people that could use a Stephen minister,” Whalen said.