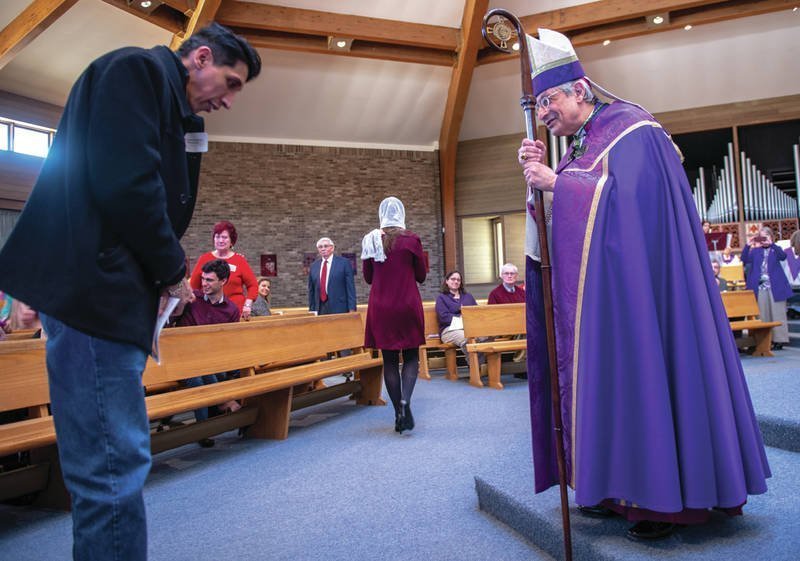 During the 2020 Rite of Election and Call to Continuing Conversion at St. Mary Our Mother Church in Horseheads, Bishop Salvatore R. Matano addresses Christian Woodruff of St. Mary of the Lake in Watkins Glen. (File photo)

As the 2020 Lenten season began, 137 people in the Diocese of Rochester, having undergone several months of preparation, were eagerly awaiting reception into the Catholic Church during Easter Vigil Masses April 11.

But less than a month before that date, the COVID-19 pandemic began to accelerate in this region of the country, putting those plans — and pretty much all other in-person parish activity across the diocese — on hold.

Fortunately, participants in the Rite of Christian Initiation of Adults had to wait just a few extra months to be welcomed into the church. And, according to RCIA coordinators in the diocese, those folks have retained their fervor for the Catholic faith despite challenges presented by the pandemic.

“These people wanted something, they had a hunger. And they were willing to wait to celebrate it, because it’s that important to them,” said Donald Smith, diocesan coordinator of sacramental catechesis and family life, adding that folks involved in the RCIA process are typically “on fire for their faith.”

RCIA groups consist of candidates — people who were baptized in Catholic or recognized Protestant rites but never received first Eucharist and/or confirmation — and catechumens, who have never been baptized. Smith said that diocesan parishes largely rescheduled RCIA initiations and other special sacramental events for the late summer and early fall of 2020 based on the New York Forward plan, which, beginning last June, allowed houses of worship to resume public services with occupancy restrictions and other safety requirements. He noted that this year’s RCIA initiations, which took place the evening of April 3, marked a resumption of that ritual taking place at Easter Vigil liturgies.

Smith said that during the pandemic’s first few months, his office encouraged parishes to utilize virtual catechesis, prayer and reflection — “anything they could do to keep themselves engaged as a community” — in order to maintain the momentum of RCIA preparation.

“Right away we went to Zoom meetings,” recalled Amanda Rayburn, RCIA coordinator at St. Marianne Cope Parish in Henrietta and Rush. She added that despite the logistical challenges of connecting with each, her 2020 class actually bonded more closely “because we had a common challenge,” she said. “We were in it together.”

Rayburn recalled with fondness the initiation service last July at Henrietta’s Guardian Angels Church, when Sarah, Ally and Hannah Peppard, Ava and Tanya Passarell, Nick Milazzo, Trevor Bailey, and Tiffany Brosius (her daughters Evelyn and Penelope were baptized at the same event) were finally welcomed into the Catholic Church.

Meanwhile, in the Schuyler Catholic Community cluster, three people — Tammy Daniels, Jane Leszyk and Chris Woodruff — were initiated into the faith this past October at St. Mary of the Lake Church in Watkins Glen.

“All three are continuing to grow in their faith journey and are a delight to have in our parish,” remarked Rosemary Nabogis, the cluster’s RCIA coordinator.

Nabogis said that members of that group — with the support of her RCIA team — have taken part in continuing catechesis, attended a variety of church events and prepared to become involved in liturgical ministry.

“They’re really getting to know other people in the parish,” she remarked.

This example bears out Smith’s assertion that folks fresh out of RCIA end up being among a parish’s most committed and enthusiastic participants, inspiring other parishioners to embrace their faith more deeply as well.

Rayburn acknowledged that because of the pandemic, becoming immersed in church life has been a bit of a delayed process for her 2020 RCIA class. She explained that some from the group — as well as many other St. Marianne Cope parishioners — are only slowly returning to church in person, adding that “I hope and pray” for a full return to parish life in the not-too-distant future.

Yet she and Nabogis said they’re pleased with what their RCIA programs have been able to accomplish, regardless of the curveballs that have been thrown at them.

“No matter what the desert, you can always find water,” Nabogis said.