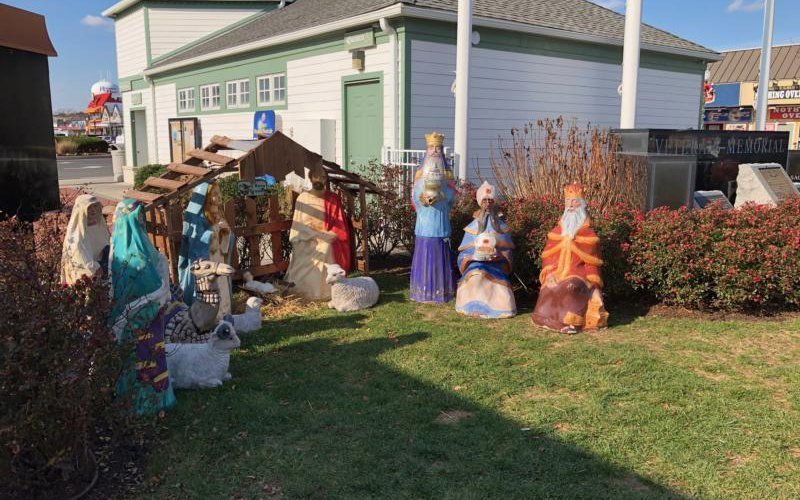 This creche had been displayed for at least 50 years in the town square of Rehoboth Beach, Del. (CNS photo courtesy Denise Boswell)

REHOBOTH BEACH, Del. (CNS) — City officials in Rehoboth Beach are violating a Catholic group’s constitutional right to free exercise of religion by banning its Nativity display on city property, according to the First Liberty Institute.

The Knights of Columbus Star of the Sea Council 7297 had displayed its creche from at least 50 years in Rehoboth Beach’s town square until it was asked to move the Nativity last year to a different location.

Now the city government has a blanket ban on including the Knights’ privately funded Nativity scene as part of holiday displays at the town’s bandstand circle or adjacent to it on the boardwalk. Officials said city policy prohibits the display on any public property because of its religious nature.

On behalf of the Knights, the First Liberty Institute sent a letter to city officials urging them to reverse the ban. The institute, based in Plano, Texas, describes itself as the largest nonprofit legal organization in the nation dedicated exclusively to defending religious liberty.

In its Dec. 12 letter, First Liberty said that both the “blanket ban on religious displays” and “the city’s prohibition of the (Knights’) religious Christmas display while allowing a secular Christmas display by another local organization” is “textbook viewpoint discrimination.”

“Such viewpoint discrimination is repugnant to the First Amendment, unlawful and provides” the Knights of Columbus council “entitlement to relief.”

The letter was sent to Mayor Paul Kuhns and City Manager Sharon Lynn. In a November TV interview about placement of the Knight’s creche, Kuhns reiterated that “city policy is not to have religious displays on public property or city property.”

“City officials either have terribly wrong information or such animus toward religion and people of faith that they would rather break the law than allow a Nativity display at Christmas time,” said Roger Byron, senior counsel for First Liberty Institute. “It is a blatant violation of the First Amendment to ban religious displays from public property.”

Byron added, “We hope the city officials are simply misinformed about the law. We encourage them to follow the law and allow the Knights and the people of this town to continue the beloved tradition of a creche as one of the holiday displays at the bandstand circle.”

Meanwhile, according to the Thomas More Society, a national nonprofit law firm based in Chicago, over half of state Capitol buildings in the U.S. allow Nativity scenes on state property.

In a Dec. 20 news release, the firm said it has teamed up again with an organization called American Nativity Scene to help keep privately funded manger scenes in the public square for Christmas. The two organizations launched the initiative in 2012.

“This is a landmark year as we have crossed the halfway mark. More than 50 percent of our nation’s state Capitols will feature Christ — the very reason for Christmas,” stated Thomas Olp, vice president and senior counsel at the Thomas More Society. “It is an exciting opportunity to share our Christmas message with the public, as the Constitution allows us to do.”

Added Ed O’Malley, president of American Nativity Scene: “By leveraging this beloved holiday, we provide an invitation to everyone to seek peace on earth and goodwill to all.”