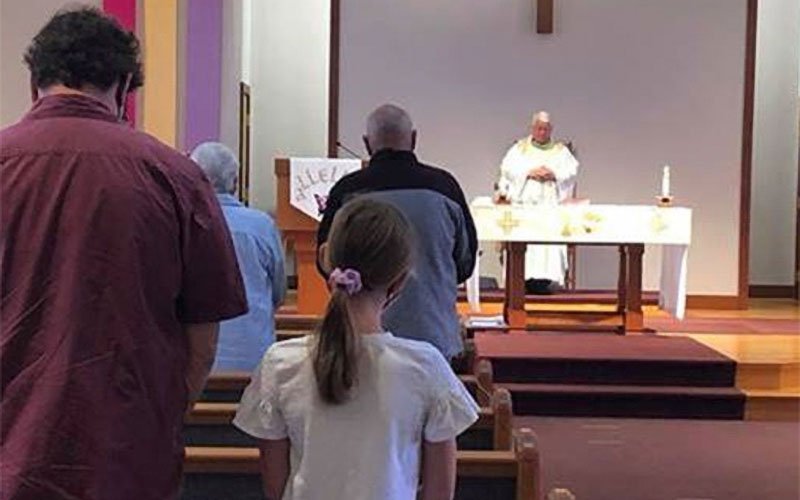 PORTLAND, Maine (CNS) — A parish priest in Bangor, Maine, said he saw many Massgoers “in tears” as they took holy Communion for the first time in close to three months at a publicly celebrated Mass June 7, Trinity Sunday, at St. Paul the Apostle Church.

Father Augustine Nellary, parochial vicar of the parish, said he was “extremely excited to have some of our parishioners back in the church and celebrate the Eucharist with them. I saw many of them in tears as they received the Eucharist.”

Across the country , Archbishop Jose H. Gomez of Los Angeles celebrated his first Mass with faithful present at the Cathedral of Our Lady of the Angels. Attendance was limited to 100 people, on a first-come, first-served basis, following the guidelines and regulations set by the Los Angeles County Health Department and the archdiocese.

In his homily, Archbishop Gomez said: “Today marks a beautiful new beginning for the family of God here in the Archdiocese of Los Angeles, as many of our churches are opening to celebrate the Eucharist for the first time in many weeks.”

“God is love! This is the meaning of the Trinity. And God’s love is personal. The Father creates us, the Son comes to redeem us, and the Spirit is sent to sanctify us,” he said.

“This beautiful teaching about the Holy Trinity is important for us in these days when we are seeing demonstrations about racism in Los Angeles and cities across the country,” he said referring widespread protests demanding racial justice that have been ongoing since the May 25 death of George Floyd, an 46-year-old African American man, at the hands of a white police officer in Minneapolis.

“When we contemplate the Trinity, we see the truth that God loves every person, that every person is made in his image and likeness, that we are all sons and daughters in Christ, called to belong to God’s family,” Archbishop Gomez continued. “I think we can all reflect on this duty that we have in this moment, to be peacemakers when our society is divided about these questions of race and equality.”

On May 26, Archbishop Gomez told priests and parish staff churches in the archdiocese could begin to open to the public the first week of June if they implemented certain safety guidelines.

In recent weeks, U.S. dioceses have begun issuing plans for the gradual reopening of churches over several phases with the safety of congregants, priests, deacons and other parish staff foremost in the minds of Catholic officials — and with safety protocols in place, including required mask wearing and social distancing inside church, with seating in designated pews.

The gradual opening of churches or planned openings — with limits on congregation size — have for the most part come as cities and states announce a gradual reopening of a variety of what they deem as “nonessential” public and private entities, including churches, as the threat of COVID-19 has subsided — but not gone away entirely

Dioceses are still encouraging online giving to parishes, and Masses pretty much everywhere continue to be livestreamed.

In the statewide Diocese of Portland, Maine, the effort to reopen churches, even in a limited fashion, prompted creativity among clergy and parish staff. No more than 50 people could be in attendance, masks were mandatory, and temporary pew seating arrangements ensured social-distancing guidelines were followed. In addition, reservations were required to make sure capacity wasn’t exceeded.

But Catholics felt the regulations and protocols were small prices to pay for the opportunity to be together again.

“People were so very happy to be back at Mass. I told them how wonderful it was to have more people to pray with,” said Father John Skehan, pastor of St. Michael Parish in Augusta. “I told them I felt as though I was praying with a congregation of bank robbers since they were all masked!”

“We are grateful to God that we are able once again to celebrate and receive Eucharist together,” said Bishop Robert P. Deeley of Portland told Massgoers during his June 7 Mass at the Cathedral of the Immaculate Conception in Portland.

“How nice to see you this morning! Over these last three months, I have known that you are there, but it is nice to see some of you actually here with us this morning,” he added.

The bishop also described the work being completed at Maine churches after each Mass to keep those attending safe, including the sanitization of seats and pews, knobs, door handles, bathrooms, altars, musical equipment and other touched surfaces.

Claire Fitts, a parishioner of the Portland cathedral, called it “a great joy” to attend Mass in church. “This is the first time in ages that we’ve been able to be in church and see Jesus ourselves and receive Him.”

“As soon as the opening song started playing, I teared up. It was overwhelming to think about the past two months,” said Julie Ann Smyth, a member of Good Shepherd Parish in Biddeford, Maine. “To return to the pew and to be with others who share your love of your faith, it was just so special.”

In Ontario, the provincial government lifted the blanket ban on services, allowing churches to resume public Masses and seat up to 30% of their capacity — the highest allowance in Canada — starting June 12.

Premier Doug Ford announced the loosening of restrictions June 8 as Ontario moved into stage 2 of its reopening plan. With Ontario churches reopening, Quebec is the only Canadian province yet to resume public Masses in some form.

But not all Catholic churches in Ontario will reopen June 12. They will need to develop protocols to provide added hygiene, allow parishioners to maintain proper distancing and ensure that no more than 30% of the pews are occupied. Those precautions will require extra volunteers and, in many cases, a decision on whether the seats will go on a first-come, first-served basis or if a reservation system or other seating method will be implemented.

“We thank Premier Ford and Minister Monte McNaughton, who coordinated and liaised with faith communities during this period of pandemic, for their efforts in recognizing the importance of places of worship for so many Ontarians,” Cardinal Thomas Collins of Toronto said in a statement welcoming the move. “We also appreciate the opportunity for constructive dialogue over the last number of weeks regarding our concerns and suggestions for a path forward.”

Bishop Ronald Fabbro of London, Ontario, said the news must be tempered with patience and health and safety remains paramount. “I ask for your patience. We have been working hard to prepare for the re-opening of churches, but we will need to make sure our communities can worship safely,” he said.

Robert Du Broy, communications director for the Archdiocese of Ottawa-Cornwall, Ontario, said some churches in the archdiocese are more prepared to open quickly than others. He said it will be left to individual churches to decide if they have the necessary number of volunteers and sanitary precautions and other safe-distancing measures in place to operate at 30% capacity.

The archdiocese has been preparing a checklist of what churches need to do to reopen safely.

Bishop Douglas Crosby of Hamilton, Ontario, said the reopening brings new challenges and the church will not look the same as it did pre-pandemic.

“We can expect instructions about social distancing, use of hand sanitizers and face masks, and how to receive holy Communion, among other things,” said Bishop Crosby. “We count on the goodwill of everybody to assure the safety of priests and congregation. Some of this will not be easy, but together we can do it.”

The bishops in the province of Alberta likewise cautioned against expectations of a quick return to “normal” Mass attendance, after Alberta Premier Jason Kenney announced June 9 he was lifting crowd limits on Mass.

The bishops said their current guidelines for public celebrations of the Mass remain in effect for now: sign up to attend, physical distancing, contact tracing, hand sanitizing, no singing, and requiring masks for volunteers and all those who wish to receive Communion.

“We are grateful to all those who have worked so hard to make the necessary preparations, and to our parishioners for the patience and the responsibility toward others that they have demonstrated as they have returned to Mass,” Alberta’s bishops said June 9.

Cardinal Collins acknowledged this shutdown has been a “painful and difficult period” for so many and said he was “grateful to Catholics throughout the archdiocese for their patience and understanding as we worked collectively to minimize the potential spread of COVID-19 over the past several months.”

Back in Maine, Julie Ann Smyth, a member of Good Shepherd Parish in Biddeford, was one of those brought to tears by being able to attend Mass in church once again.

“As soon as the opening song started playing, I teared up. It was overwhelming to think about the past two months,” she said. “To return to the pew and to be with others who share your love of your faith, it was just so special.”

Contributing to this story were the staff of Angelus in Los Angeles, Mickey Conlon at The Catholic Register in Toronto and Andrew Ehrkamp of Grandin Media.

Contributing to this story was the staff of Angelus, the online news platform of the Archdiocese of Los Angeles.