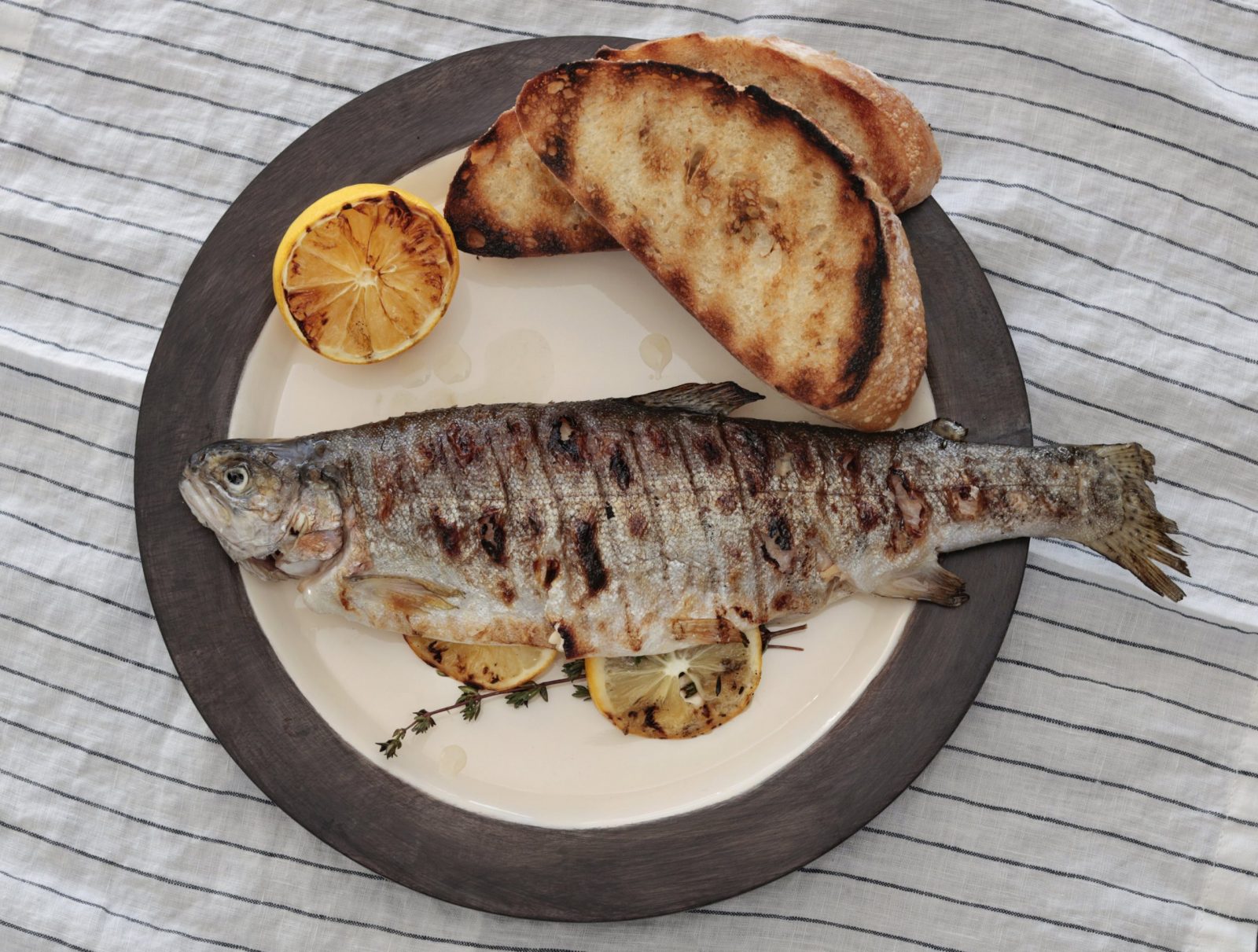 Grilled rainbow trout is accompanied by toasted bread. Fresh trout are perfect for cooking over an open fire. (CNS photo by Nancy Wiechec)

This is the third in an eight-part series, “Food from Scripture.”

Fish stories capture our attention with suspense and metaphor. We love to hear about the big catch or the one that got away.

In fact, fish are at the center of some favorite Bible stories — Jonah and the great fish, the multiplication of the loaves and fishes, Jesus appealing to fishermen to become his disciples.

Among the oldest of trades, fishing flourished along the Sea of Galilee at the place and time of Jesus’ public ministry. Fish, fishers and fishermen are specifically mentioned more than 30 times in the New Testament.

After the Resurrection, the fish became a symbol of faith. Fish depictions were used as secret signs to mark the meeting places and tombs of early Christians who did not want to be discovered by their persecutors.

It was Christ himself who made the connection between fishers and followers.

Anyone who fishes knows it requires commitment, skill and patience. As the rod and reel folk like to say, “Good things come to those who bait.” Discipleship demands similar traits.

Fish was a prominent protein of Jesus’ time. Yet, because fish perished quickly, it was often preserved by salting and drying or pickling. Although the Bible comes up short in providing actual recipes, the last chapter of John’s Gospel recounts how fresh fish was cooked.

This recipe requires a fresh catch and follows that method. Both fish and bread are subtly flavored with olive oil, sea salt and a hint of smoke.

Start to finish: About 1 hour
Servings: 4

Fresh-caught white bass, perch, trout or mackerel work well with this recipe. You can substitute fish fillets. Put the lemon slices and thyme on top of the fillets, use a grill basket to keep everything together and adjust the grill time as noted below.

Cut one lemon in half crosswise. Cut the other lemon into eight thin slices. Pat the fish dry with a paper towel. Drizzle olive oil over the outside and inside the fish. Season each, outside and inside, with a few pinches of sea salt. Place two sprigs of thyme and two lemon slices inside the fish, cover them with plastic wrap and set aside at room temperature while you prepare the grill.

Clean the grill grate well to prevent the fish from sticking. Prepare a fire using wood or charcoal briquettes. It’s ready for cooking when the coals are glowing, about 25 minutes after starting the fire. Using long tongs, carefully spread the hot coals in a single layer under the grill plate. If using a gas grill, preheat it to 500 F, then turn the temperature to medium before cooking.

Brush olive oil onto both sides of each bread slice. Sprinkle a bit of sea salt on one side of each.

Place the bread and the lemon halves (cut side down) on the grill. Flip the bread slices after about 2 minutes and grill the other side. When the bread is nicely toasted, remove it and lemon halves from the grill and set aside.

Place the fish on the grill and cook each side for 7 to 10 minutes. Use a large metal spatula to turn the fish. Grilling time will depend on the size and thickness of your fish and the temperature of your grill. The fish are done when the meat flakes easily away from the bones. Fillets will cook much faster, about 4 to 6 minutes on each side.

Place the fish on a serving platter and squeeze the juice from the grilled lemon over the top of the fish. Serve with the grilled bread and a green salad.