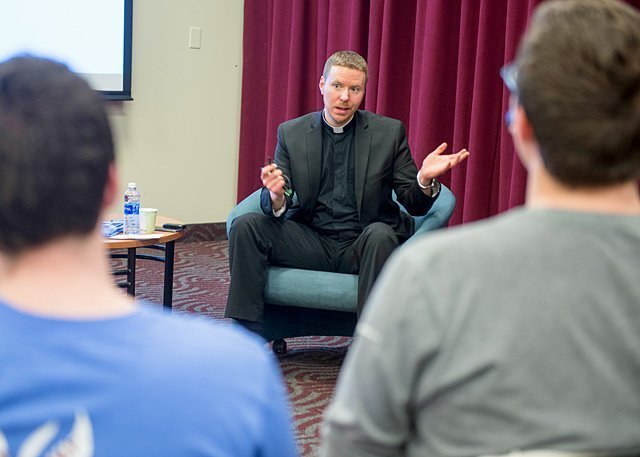 During an April 3 presentation at St. John Fisher College, Father Justin Miller talks with students about his journey from being a freshman at Fisher to becoming a diocesan priest.

PITTSFORD — When Justin Miller became a freshman at St. John Fisher College in the fall of 2003, the priesthood was the furthest thing from his mind. The Springville, N.Y., native hoped to become a lawyer and have a typical college experience.

“When I got here, I never thought I would be a priest. I was never thinking about that,” he told St. John Fisher students during an April 3 talk about his journey to priesthood. “I wanted to make a lot of money. I wanted to be like everyone else.”

Despite his plans for the future, it was during his time at Fisher that Father Miller, 31, said he felt God leading him toward a different path. He was ordained in 2016 and is now parochial vicar at St. Joseph Church and Church of the Holy Spirit in Penfield.

During his presentation, which was part of the campus ministry series “Agape Latte,” Father Miller related many of his college experiences. He discussed his struggle with grades and relationships, as well as thoughts of transferring to another school. He also shared the instances during which he felt God reaching out to him, such as when his friend invited him to join the college’s gospel choir and some powerful experiences he had while receiving the sacrament of penance.

He said he was torn between a desire for a secular college experience while also wanting to listen to God’s plan for him. He decided to keep putting God off. 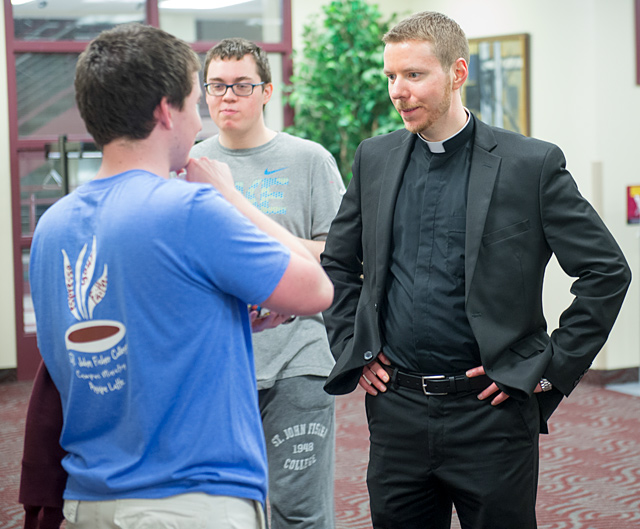 Then during a walk around campus on a windy day, an evergreen tree fell on him. Though he walked away without a scratch, the incident was life-changing; he decided to choose God.

“I somehow realized that my whole life was a contradiction and unless I chose God, I wasn’t going to have peace. So I chose God,” he explained.

After he made the decision to start living his life for God, Father Miller said he started thinking about the priesthood. He took his parents out to dinner and told them he was considering becoming a priest. But a relationship in his senior yearmade him think that God was still calling him to explore the vocation of marriage. When the relationship ended just before graduation, Father Miller said he became really depressed.

“I had put all my eggs into the ministry basket and then in the marriage basket, and now when that ended, it was really tough,” he said.

After graduating from Fisher in 2007 with a degree in English and religious studies, Father Miller went to work at Paychex. It wasn’t until a year and a half later with some help from his friends that he acted on God’s call to the priesthood and entered the seminary. He was ordained a transitional deacon in 2015, which he says was the “best day of his life,” noting that the ceremony was a peaceful and positive experience. The following June, he was ordained a priest by Bishop Salvatore R. Matano at Sacred Heart Cathedral.
“I was a nervous wreck at my ordination, but God just helped me get through it,” he said.

Approaching the one-year anniversary of his ordination, Father Miller said he’s had many great experiences as a priest and is happy with his decision to answer God’s call to the priesthood.

“I would not change anything about my vocation, and I’m very happy to be a diocesan priest, ” he told the students.

“I really love hearing from different people of Christian faith, regardless of their denomination, about how they got to where they are,” Copeland, a finance and marketing major from Honeoye Falls, told the Catholic Courier. “(It was interesting) to hear that it wasn’t a clear-cut moment when he was called to the priesthood. It was many steps drawing him closer to the priesthood that got him there.”