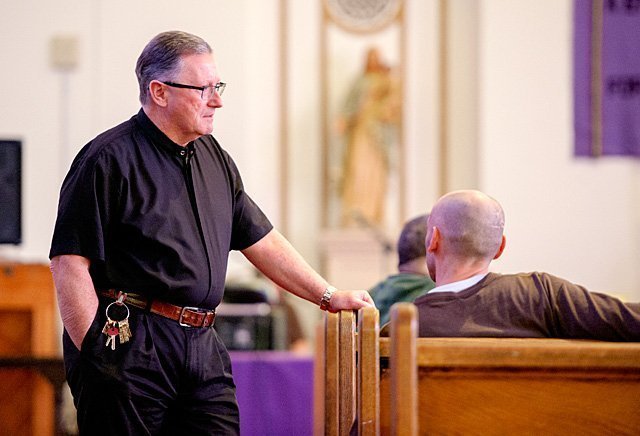 Deacon Mike McGuire talks to prisoners before the start of Mass at Elmira Correctional Facility March 18.

ELMIRA — Deacon Mike McGuire likes to fish in his spare time. He also casts numerous lines in his full-time work — as a fisher of men, as Jesus exhorted his first apostles to be.

But for all the long hours he spends evangelizing, Deacon McGuire rarely makes a catch.

That’s the challenge of being a Catholic chaplain at a maximum-security state prison.

Set high atop a hill on Davis Street, Elmira Correctional Facility is easily visible and yet clearly separated from passersby on the city’s north side. The sprawling complex is where Deacon McGuire, 64, has performed full-time chaplaincy for the past 11 years, a tenure that’s due to end with his retirement in December 2014.

"How’s God?" a prison official cheerfully — and perhaps a bit mockingly — asked Deacon McGuire in greeting one early March afternoon. The deacon said he often gets such questions from both prisoners and staff; another oft-asked question is whether he has "saved" anyone today. The questions bespeak general doubt that anyone could make a spiritual dent in a place where he acknowledges "there’s a lot of evil."

That evil isn’t readily apparent in the many rows of cells. There the atmosphere is subdued: some men sleep, others read, others stare idly off into space while propped up on their tiny cots. But the crimes that put them behind bars rank these folks, as maximum-security inmates, among the state’s worst of the worst.

Although Deacon McGuire endures some ribbing, the easy banter he maintains with several prisoners indicates he is a welcome presence. Since they have little to no contact with the outside world, Deacon McGuire arrives as a breath of fresh air — a lone figure expressing concern for their spiritual welfare.

"We’re the only ones that meet with them on that level," Deacon McGuire said of the chaplaincy staff that offers catechesis, rosary/prayer groups, individual meetings and Tuesday-afternoon Masses as they persevere in the uphill battle against evil.

One inmate, Mike, said Deacon McGuire "brings a level of comfort and calmness to a place that’s not always comforting. He’s not just there for you spiritually. He’s there as a friend, somebody who can be trusted."

However, the chaplains’ challenge is daunting: Deacon McGuire openly acknowledges that their ministry will fail to move the great majority of prisoners — even those who participate in chaplaincy programs. Still he persists, in the hope that perhaps a few will seek to turn their lives around.

"God forgives. Even if nobody else does, he does," he said. "We have to be accepting of that gift of forgiveness."

Deacon McGuire said he stressed the importance of "do-overs" in a recent Lenten homily to inmates: "Every day is an opportunity to change, to do your life over. It’s not over; it’s just harder for them."

It’s immensely harder to change, Deacon McGuire observed, than it is for other Catholics whose Lenten sacrifices might be curbing excessive eating or TV viewing.

"Their bad habits are killing, stealing, raping. They’re here after a life of that behavior," he remarked.

Ordained a permanent deacon for the Diocese of Rochester in 1990, Deacon McGuire got his start in prison ministry while volunteering at Groveland Correctional Facility in Livingston County. He became a prison chaplain at Elmira in 1994 after serving as national director of Conquest Boys Clubs, a Catholic youth-development program.

He works Tuesdays through Fridays at the prison, living at the rectory of Elmira’s St. Mary Southside Church. Deacon McGuire, who has a wife and two sons, then goes home for long weekends in Canandaigua where he has attended St. Mary Church for the past 30 years.

He is one of two permanent deacons from this diocese serving on the correctional facility’s staff; the other is Deacon Al Pacete. In addition, Father Rick Farrell, pastor of Blessed Sacrament Parish in Elmira, regularly celebrates Tuesday Mass at the prison. 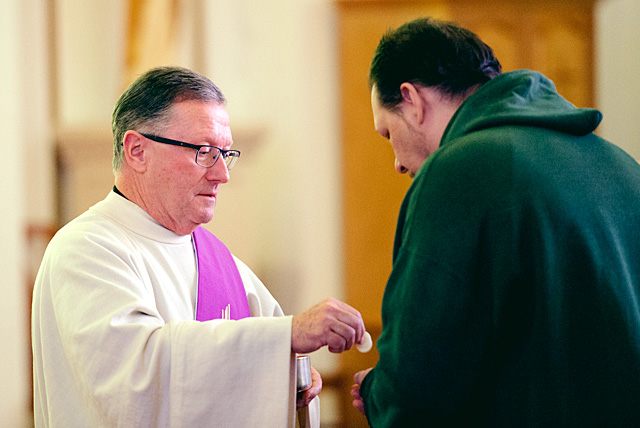 Whereas Deacon McGuire works full time at Elmira, Deacon Pacete and Father Farrell also minister at Southport Correctional Facility — another maximum-security prison — seven miles to the south. Southport is almost entirely made up of "special housing units" where prisoners, for disciplinary reasons, are only allowed out of their cells one hour per day. Elmira Correctional Facility also contains a special housing unit, but most prisoners there are allowed to attend programs and meals outside of their cells several times per day. A popular destination is the field house, as indicated by the large crowd of inmates on a recent Friday afternoon utilizing basketball courts, an indoor track and televisions as several guards kept close watch.

Some prisoners find their ways to religious activities offered by the Catholic staff and chaplains representing other denominations. Deacon McGuire estimated that 250 of Elmira’s 1,800 prisoners are Catholic, with about 65 attending weekly Mass in the spacious prison chapel.

In addition to assisting at Mass and facilitating programs, Deacon McGuire frequently acts as a liaison to prisoners’ families. He also makes himself available to any inmate — regardless of religion — who sends a note requesting a meeting. He said the average prisoner’s stay at Elmira is 18 months and a great deal of turnover takes place as men are shifted in and out to other facilities of various security levels. Men under his ministerial care typically have long histories of prison time.

"This isn’t their first rodeo. Most of them started their criminal activity at age 16 or 17, and have been in prison again and again and again," Deacon McGuire said, noting that even frightened first-time prisoners who vow never to return often fail to fulfill such pledges. Noting that 20 percent of Elmira’s inmates are serving life sentences, he said many never stood a chance of succeeding, having had no home lives to speak of as children.

"At least 90 percent of the guys in here come from fatherless households," he said. "I know my own selfishness and weakness, and I’m fully capable of being just as evil as they are. But I know they didn’t have the advantage I did (growing up). Most people can’t even imagine the life and choices they’ve made."

Some of their violence erupts during their long days and nights of confinement. Even though most of Elmira’s inmates have individual cells, Deacon McGuire said there are regular incidents of fighting, harassment and abuse when guards have their backs turned. He noted a hierarchy of sorts by which the most respected inmates are murderers and gang members. The next level down are those who were involved in drug crimes, burglary and robbery. Most frequently targeted for ill treatment are those who have committed sex crimes.

"I know what it’s like in the blocks. The most cruel culture is the inmate culture. They prey on the weak," Deacon McGuire said, adding that he has often stepped in to advocate for the most vulnerable.

To survive in the cell blocks, Mike said prisoners must display tough exteriors. However, thanks to the availability of Catholic activities, he and other regular participants are able to let their guards down and explore their feelings and spirituality.

"We have a place to be ourselves," said Carlos, another Elmira inmate.

"We walk into the deacon’s office and chapel, and we’re just men," Mike agreed.

The inmates credited Deacon McGuire with offering a safe environment.

"He’s one of the most decent men I’ve ever met in my life. He’s always got a smile for you, always stops to talk to you," said Louis, a third inmate.

"He’s always treated us not as inmates, but more like a brother. Some look to him as a father," Mike said. "If any one of us ever need anything, he’s there for us." 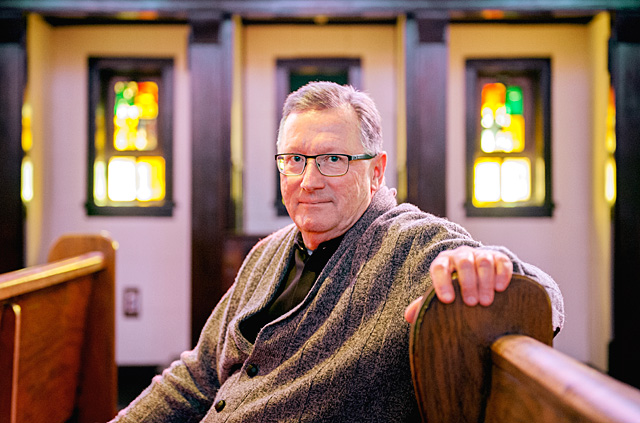 After many years of prison ministry work, Deacon Mike McGuire will retire at the end of 2014. Above, he poses at the chapel inside Elmira Correctional Facility March 18.

Yet Deacon McGuire said that he’s learned over the years to maintain a certain level of detachment, so as to better distinguish inmates who are truly seeking ministry from those hoping to manipulate the chaplains — asking them to influence other prison officials, pass messages along to people on the outside and/or transport contraband.

"The percentage is really small that are actually here to change their lives. Their lives have been lying, stealing, cheating. That’s how they survive," he said. "I’ve been set up and betrayed, put in jeopardy of my employment and reputation."

He’s also learned over the years not to pull his punches with the inmates. When they ask how he thinks they’ll fare on the outside, Deacon McGuire is forthright if he believes they haven’t sufficiently experienced conversion.

"He’s tough around the edges," remarked Daniel, a prisoner who said he respects Deacon McGuire for taking a hard line in order to bring about personal change.

Remarking on the kidding he gets about saving people, Deacon McGuire said his standard reply is, "No, they have to save themselves." He said he urges prisoners to shed their selfishness, stop making excuses for the crimes they committed, be remorseful for their offenses and develop compassion for others. He said once in awhile that message does get through to some guys — "the ones who it dawns on that their life can be better than it is."

One such person is Billy, who was paroled in late March after spending much of the past 35 years in prison. He said Elmira’s Catholic chaplains have guided him on his walk with God and "now I’m leaving a better man because of it." Billy maintained that even the most hardened of criminals can discover their faith in prison "if they’re open" to exploring it.

To bring about the possibility of a conversion, Deacon McGuire — along with Deacon Pacete, Father Farrell and others involved in prison chaplaincy — embrace a population the general public wouldn’t bother to give the time of day. Deacon McGuire acknowledged, for instance, that fellow members of a Saturday-morning men’s group outside the prison walls express interest in his profession "but they don’t want to see the place."

There are days he isn’t wild about going there, either. He admits that his work routine is grueling and thus he has opted for retirement.

What’s kept him going this long? he is asked.

After a pause, he reverts back to his hobby by way of explanation.