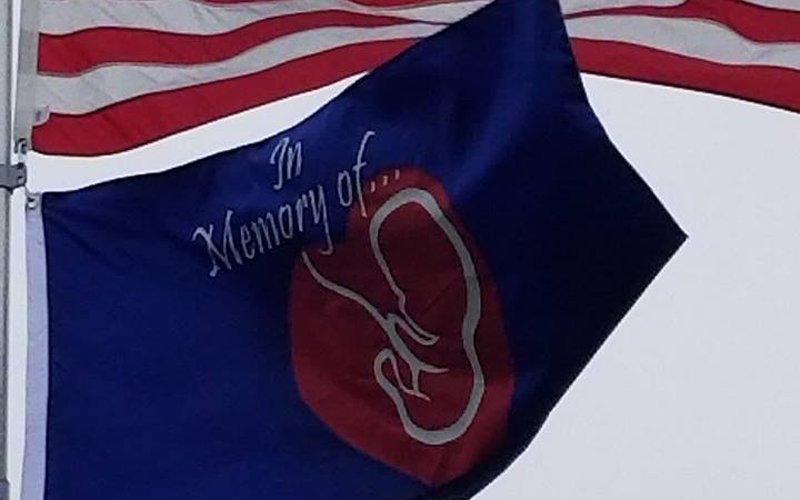 A flag commemorating unborn children who have been lost to abortion flies below the American flag in front of St. Mark Church in Greece. The memorial flag was dedicated by Father Louis Sirianni, pastor, following the 11 a.m. Mass on Nov. 26. (Courier photo by Mike Latona)

Through erecting a special flag, St. Mark Parish now offers a lasting and visible reminder of its stand against abortion to all who pass by its church.

The flag, memorializing unborn children who have been lost to abortion, was dedicated Nov. 26 at the church, located at 54 Kuhn Road in Greece. Father Louis Sirianni, who serves as St. Mark’s pastor, blessed the flag in a brief ceremony at the church’s flagpole as a group of parishioners — having just exited the church after the 11 a.m. Sunday Mass — looked on.

Flying below the American flag, the new flag displays the words “In Memory of” and is accompanied by the image of an unborn baby in its mother’s womb. According to a bulletin article written by Father Sirianni, a memorial will soon be added at the base of the flagpole, which stands in front of the church near its parking lot.

Father Sirianni’s article was titled “What Have You Done Lately to Change the Abortion Mentality of Our Country?” It appeared Oct. 1 in conjunction with Respect Life Sunday, which marked the launch of the United States Conference of Catholic Bishops’ yearly Respect Life program. The pastor wrote that St. Mark Parish, through its initiative involving the flag, seeks to pay tribute to “these innocent and defenseless members of our human family” by announcing “our sadness at the loss of 1,500 children each day in the USA due to abortions.”

“This is a great opportunity to renew our efforts to promote the dignity of all human life from the moment of conception to the moment of natural death,” Father Sirianni added in the article. “Hopefully this will remind us and others of the continuing need to pray and work for an end to the atrocity of abortion.”