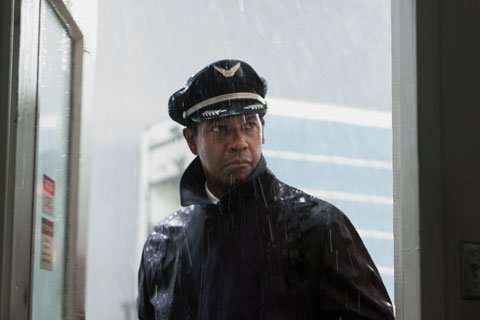 NEW YORK (CNS) — Fasten your seatbelts and prepare for a bumpy ride in "Flight" (Paramount), a morally ambiguous thriller about an airplane disaster and the emotional impact it has on the survivors.

Director Robert Zemeckis ("Forrest Gump") certainly knows how to stage a scary plane crash, as he did in his 2000 film "Cast Away." Here, the downing of SouthJet Flight 227 from Orlando to Atlanta is meticulously crafted and terrifying to watch. Unfortunately, it’s all downhill from there, as the movie’s emotional edge is blunted by the lax morals of its characters, including the hero.

Denzel Washington stars as Capt. Whip Whitaker, whose flashy name suits his swaggering nature. He’s an alcoholic and a cocaine addict, and he’s sleeping with one of the flight attendants.

The crew on Flight 227 wink and nod and look the other way, except for the new guy, co-pilot Ken Evans (Brian Geraghty), who is appalled. When hung-over Whip spikes his orange juice with vodka midflight, then falls asleep at the controls, you’ll wish you’d taken the train instead.

But once disaster strikes and the plane takes a nosedive, Whip springs into action. In the film’s most dramatic moment, he inverts the plane to level its descent, and then brings it down upright in a field beside a church. All but six of the 102 passengers survive.

This is Whip’s "Miracle on the Hudson" moment — but he’s no Chesley "Sully" Sullenberger. The post-crash investigation by the National Transportation Safety Board, headed by Ellen Block (Melissa Leo), reveals Whip’s impaired and — for a pilot — quite illegal condition. Suddenly the overnight hero becomes a potential villain facing manslaughter charges and a prison sentence.

"Flight" descends into a courtroom drama, with Whip surrounded by helpers and minders. These include Charlie Anderson (Bruce Greenwood), who represents the pilots’ union, and Hugh Lang (Don Cheadle), the airline’s attorney.

Far more colorful are Harling Mays (John Goodman), Whip’s buddy enabler who keeps him supplied with illegal drugs, and Nicole (Kelly Reilly), the proverbial prostitute with a heart of gold.

Nicole has survived a drug overdose, and while in the hospital takes pity on Whip. She’s desperate to reform her own life and wants Whip to come clean and join her on the path to redemption.

It’s a rocky road and, regrettably, "Flight" dwells far too much on Whip’s failings, filling the screen (often gratuitously) with sex, drugs and booze, as well as with "friends" who condone his bad behavior. It also ridicules organized religion, cynically making light of survivors who thank God for the gift of life.