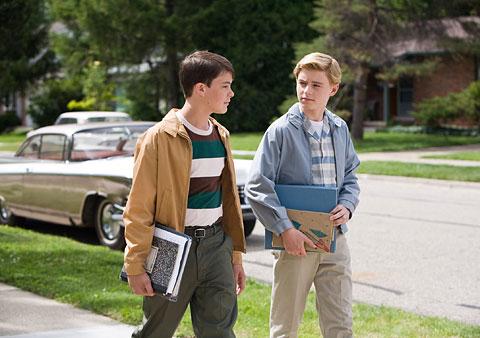 NEW YORK (CNS) — Just when you thought Hollywood couldn’t — or wouldn’t — make family-oriented films anymore, along comes "Flipped" (Warner Bros.), a charming, warm and very funny coming-of-age story with a surprisingly powerful pro-life message, at least in light of its Tinseltown origins. Unfortunately, though, a few turns of phrase in the dialogue preclude endorsement for all.

Directed by Rob Reiner ("The Bucket List," "Stand by Me") and based on the eponymous novel by Wendelin Van Draanen, "Flipped" is the story of two kids, Juli Baker (Madeline Carroll) and Bryce Loski (Callan McAuliffe), growing up in late-1950s suburbia. They meet as second-graders, when Bryce and his family move into the neighborhood across the street from Juli.

The film chronicles Juli and Bryce’s friendship over the next six years, with each character telling the story in voice-over narration. This he said-she said staging technique is clever and revealing, reminding the viewer that there are two sides to every story, appearances are often deceiving, and rushed judgments tend to be wrong.

A precocious 7-year-old, Juli is instantly smitten by her new neighbor: "The first day I met Bryce Loski I flipped," she recalls. But Bryce remembers it differently: "All I ever wanted was for Juli Baker to leave me alone."

He’s a typical boy of his age, naturally embarrassed by the girl’s affections, and ragged on by his peers. Bryce’s strenuous efforts to avoid Juli are amusing, as are her determination and patience in seeing this puppy love through.

As "Flipped" chronicles the "sturm und drang" of their friendship, we learn more about the Baker and Loski families. Bryce’s parents, doting Patsy (Rebecca De Mornay) and boastful bigot Steven (Anthony Edwards), are solidly middle-class and obsessed with propriety.

They are suspicious of the Bakers, particularly Dad Richard (Aidan Quinn), a bohemian type who prefers to paint landscapes rather than mow his lawn and fix up his house. The Bakers raise chickens and supply the neighborhood with eggs; Mr. Loski bans these from his home, fearful of salmonella.

Family dramas are not sugarcoated in "Flipped," which lends the film a sense of realism. Here families stick together and work things out, even when the problems seem insurmountable.

The Bakers, for example, are struggling to make ends meet, as any spare income goes toward keeping Richard’s brother Daniel (Kevin Weisman), who is mentally disabled, in a private home rather than a state institution. "Flipped" displays poignancy and courage in its defense of Daniel against societal prejudice.

This intensely pro-life sideline ultimately melts the frost between the Baker and Loski families, a process aided by the arrival of Bryce’s newly widowed grandfather Chet (John Mahoney). Chet proves the perceptive sage, mindful of his grandson’s feelings, yet impressed with the spirited Juli.

Everything about "Flipped" feels right and genuine: the typical kid dialogue, lively school classrooms, and families who quarrel, make up and sit together around the TV to watch "Bonanza." Reiner’s direction is pitch-perfect with a prevailing atmosphere of innocence and sensitivity reminiscent of Frank Capra — perhaps not unexpected, as the legendary director’s grandson is one of the film’s producers.

Though the elements listed below require a fairly restrictive rating, the underlying values of this uplifting film make it probably acceptable for older teens.

The film contains a handful of profane and crass expressions and scenes of family discord. The Catholic News Service classification is A-III — adults. The Motion Picture Association of America rating is PG — parental guidance suggested.