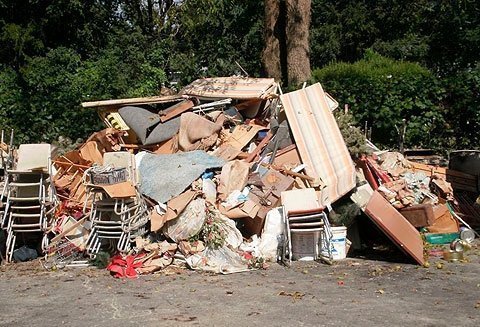 Debris from flood damage is piled outside St. Patrick School in Owego. Most students returned to class Sept. 19 in the formerly vacant Our Lady of Good Counsel School, which is located in Endicott.

Diane Snyder-Bell uttered those words in reference to the cleanup efforts at Blessed Trinity/St. Patrick parishes in Tioga County, where she is business manager, but those sentiments likely are shared by many Southern Tier residents facing massive damages and equally daunting recovery work in the aftermath of early September flooding in the region.

The flooding was caused by heavy rainfall from the remnants of Tropical Storm Lee, which fell onto ground already saturated by equally heavy rainfall brought by Tropical Storm Irene in late August. Many creeks, streams and rivers flooded their banks, and the Susquehanna River reached flood stage early Sept. 7 and continued to rise throughout the next two days, flooding Binghamton, Owego and many other communities.

Most of Blessed Trinity/St. Patrick’s buildings took in at least a little water, but St. Patrick School and the hall underneath St. Patrick Church, both located in Owego, sustained the most damage, Snyder-Bell said. The water in the school’s lower level reached almost to the ceiling, she said, so the school was closed last week while volunteers and professional cleaners worked to remove ruined and soggy items and clean the school. Cleanup work in the school was progressing quickly, but more must be done before the children can return to the building, she said.

In the meantime, most St. Patrick students returned to class Sept. 19 in the formerly vacant Our Lady of Good Counsel School, which is located approximately 12 miles away in Endicott. Our Lady of Good Counsel Parish, which is part of the Diocese of Syracuse, agreed to let St. Patrick School temporarily use the facility for students in kindergarten through fifth grade and for the children in the school’s preschool program for 4-year-olds, Snyder-Bell said.

"Our 3-year-old pre-K program isn’t even moving off campus," she added.

Instead, the 3-year-olds will go to preschool in a room in a building on the St. Patrick campus that wasn’t affected by the flooding, she said. The room for 3-year-olds in St. Patrick School was located in the school building’s lower level and sustained the most flood damage, so that class might be the last one to move back into the school once the cleanup work is completed.

"They’ll remain in this building until their room is fixed," Snyder-Bell said.

Work still is underway in the St. Patrick parish hall as well, she said.

"That’s a mess. A lot has to be demolished," Snyder-Bell said.

"You don’t think it’s that much damage at first, but anything that got wet and isn’t cleanable, isn’t washable, has to be thrown out," she said.

Bishop Matthew H. Clark visited St. Patrick Sept. 18, when he spoke at the parish’s 9 a.m. Mass. He also spoke at the 10:45 a.m. Mass at St. Margaret Mary in Apalachin, which also is part of Blessed Trinity/St. Patrick and sustained flood damage.

On Sept. 14 Bishop Clark asked all parishes in the Diocese of Rochester to take up a special second collection for flood relief at weekend Masses Sept. 24-25 . Proceeds from the collection will be used to help diocesan Catholic Charities’ provide assistance to flood victims in the Southern Tier.

Several local parishes have undertaken their own relief efforts. St. Patrick Parish in Victor collected nonperishable food items Sept. 10-11 for a local food pantry and for those in need in the Southern Tier, and students and staff at St. Agnes School in Avon are collecting items for the damaged preschool classroom at St. Patrick School in Owego.