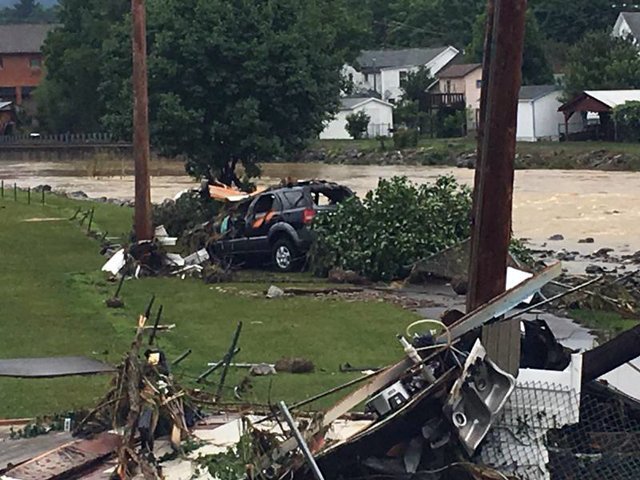 White Sulphur Springs, W.Va., is seen June 24 after heavy flooding. Gov. Earl Ray Tomblin said at least 26 people have lost their lives across the state.
By Colleen Rowan
Catholic News Service
WHEELING, W.Va. (CNS) — Bishop Michael J. Bransfield of Wheeling-Charleston asked for prayers for those affected by the devastating floods in West Virginia that have left 26 people dead, including a 4-year-old and an 8-year-old.
As of June 27, almost 500,000 were without power and 44 counties were under a state of emergency.
"We pray for those affected by this natural disaster, including those who have lost their homes and livelihoods; those who do not have electricity, food or clean water and, most importantly, for those who are injured and have lost loved ones," Bishop Bransfield said. "Let us prayerfully remember those who died."
"As floodwaters rise and recede, I ask you to please join me in praying for the protection of the brave men and women who are working to bring relief to our neighbors," the bishop added.
Damage from the flooding was widespread, with the southeastern region of the state being hit the hardest. Walls of water came crashing into towns and small communities leaving ruin and heartbreak in their wake.
"It’s pretty devastating," said Father Chapin Engler, pastor of St. Charles Borromeo Parish in White Sulphur Springs. "It was the most significant rain event I’ve ever experienced. … The main waterway that goes through the valley of White Sulphur completely flooded its banks and took with it many houses."
Storms brought 10 inches of rain in just four hours in White Sulphur Springs. A home ripped off its foundation and engulfed in flames floated down
Howard’s Creek. There were many rescues of people in the area trapped by flood waters, Father Engler said, and residents took shelter at the former White Sulphur High School building in town.
At the Greenbrier Resort located across the street from the church, Father Engler said, there was "a raging river through the golf course."
In Richwood, 7 inches of rain fell in just three hours. Flash flooding caused the Cherry River to overflow its banks, devastating the small town of roughly 2,000 residents. "It’s horrible," Father Quy Ngoc Dang said, surveying the damage in the town the day after the flood. A priest of the Society of the Divine Word, he is administrator of Holy Family Parish in Richwood.
"The water is receding, but the damage is severe," he told The Catholic Spirit, newspaper of the Diocese of Wheeling-Charleston.
Unable to reach his parishioners by phone because of power outages that morning, Father Dang was preparing to check on them at their homes. He asked for prayers for residents of the area, especially for the poor.
On the morning of June 24, officials found the body of 4-year-old Edward McMillion, who was reported missing after flood waters were rising in Ravenswood the night before. Eight-year-old Emanual Williams died after falling into Big Wheeling Creek in Wheeling June 23. A total of 26 across the state were killed in the flooding.
On June 26, Bishop Bransfield celebrated Mass at the Cathedral of St. Joseph in Wheeling to pray for the victims of the flooding. "We are confronted with great suffering in West Virginia," he said in his homily, speaking of those who died, their families and the countless who have lost their homes and had their communities reduced to ruins. "Our prayers are with them. … We will do as much as we can for them."
Catholic Charities West Virginia was working with Voluntary Organizations Active in Disaster and state and local government to prepare for long-term recovery in the communities hardest hit by flooding. Catholic Charities was accepting donations to its Disaster Services fund at http://catholiccharitieswv.org.
To help with recovery efforts, Bishop Bransfield approved a special collection during all weekend Masses July 2-3. Proceeds will be used by Catholic Charities West Virginia to assist with long-term recovery efforts. All funds will be used in West Virginia and distributed through the state’s Catholic Charities network.
– – –
Rowan is editor of The Catholic Spirit, newspaper of the Diocese of Wheeling-Charleston.
Copyright © 2022 Catholic News Service, Inc. All rights reserved. Linking is encouraged, but republishing or redistributing, including by framing or similar means, without the publisher's prior written permission is prohibited.