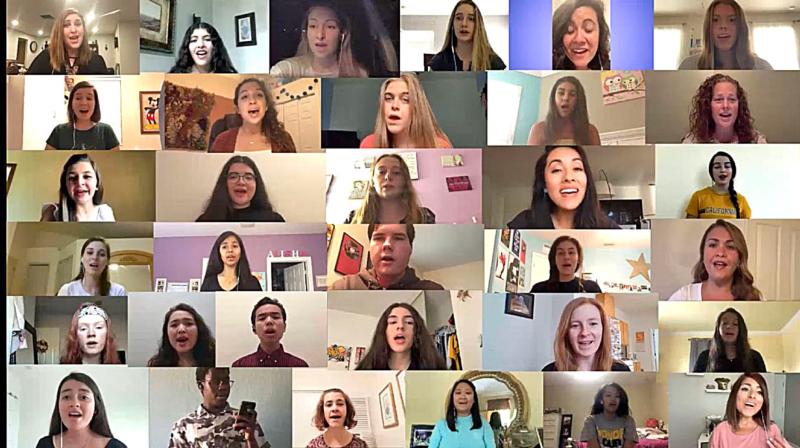 And Danielle Latell, a senior and choir member at Bishop Verot High School in Fort Myers, is no exception. “Singing has always been my favorite way to worship and express my love for God,” Latell said. “And being able to take a class and be in a club that does just that is unbelievable to me.”

Latell has taken a choir class since the fourth grade. This year, the class is spearheaded by Lisa Clark, theater manager at Bishop Verot. Although Latell is not technically enrolled in the choir class, she was participating in the school’s choir club.

She took part in the school’s recent virtual choir performance of “Sanctuary,” which can be viewed here — https://youtu.be/OY9XZaGzGSc — and said the song, which the students sing at Mass and other school events, really brought the choir together.

Performing it in this way was tricky though. Latell said each of singers had to separately record their parts while listening to the soundtrack, which the choir teacher put together.

When it comes to the platform to sing, the teen sees both online and in a classroom as positive experiences. “Both ways have their perks,” Latell said. “Singing in a club or classroom atmosphere provides more of a sense of community and togetherness while also making it quick and easy to jump from section to section of music. In contrast, virtual singing makes it easier to isolate your individual part and learn it more effectively.”

It is not the method that matters, but the ability to worship God in song that makes Latell happy. She considers her time in the choir at Verot as a major moment in her life.

“Getting involved in the choir has been hands down one of the best things that’s happened to me at Verot. It is such an open and positive atmosphere, and everyone there shares a common love for singing, as well as representing the faith and our school through music,” she said. “I know for a fact that I will never stop singing no matter where I go, and I definitely plan on joining an a cappella group in college.”

She gave credit to her music teacher, Clark, for training and honing her ability to sing.

Clark is a seasoned veteran. She taught choir for three years at St. Francis Xavier Catholic School in Fort Myers and began teaching at Bishop Verot in 2013. She found the transition to virtual choir a necessary one for this time, but she said it has its drawbacks.

“It’s very difficult and unfortunately for the students, the reward is very delayed,” Clark said. “With normal choirs, it’s instant gratification to hear those harmonies you’ve learned combined with the other voices in the choir and it can be a motivator to keep practicing. With all the technology we currently have, there’s still just no way to run a live choir rehearsal where you can hear everyone. Instead, I record parts for them, email them, and they learn them at home.”

“Since the virtual choir videos take a lot of time to edit on my end, we probably won’t learn too much new music,” she said. For now, her lessons are “focusing more on the music theory end of things, which we normally only cover minimally because of the pressure of upcoming performances and monthly school liturgies.”

Clark said the virtual choirs are tough on the students, but she thinks they have enjoyed them.

“Part of why kids love being in choir and theater is the feeling of togetherness, and right now they’re missing that shared experience of performing together. But it is nice to have a final product that they can be proud of, and that’s why it was worth it for me to learn how to create the virtual choir videos.”

Maurice Beaulieu is copy editor of Florida Catholic, the newspaper of the Archdiocese of Miami and the dioceses of Orlando, Palm Beach and Venice.