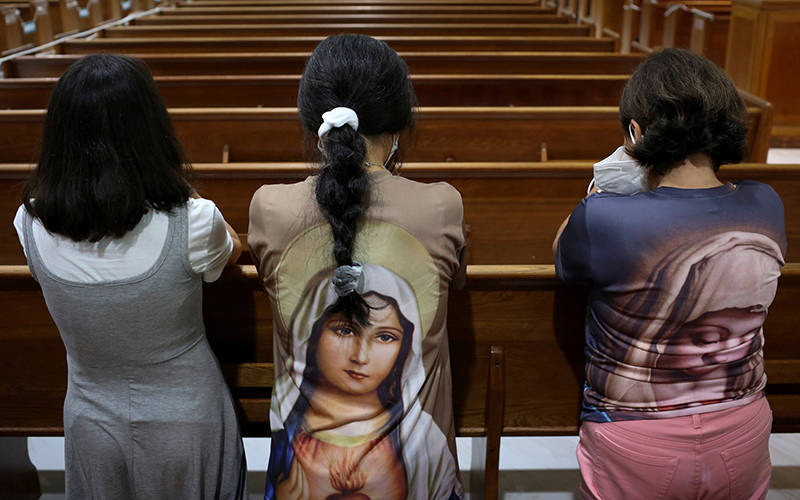 MIAMI (CNS) — Following the sudden collapse of a multistory building with people trapped inside, many Catholics around South Florida have fled to a common refuge: the comforting presence of Mary.

So it was that several schools in the Miami Archdiocese reacted to the June 24 fall of the Champlain Towers South condo in Surfside by praying the rosary. Reflecting on its glorious, joyful, sorrowful and luminous mysteries, they called on the Mother of God for aid and comfort.

“I think everyone understands that in pain, you turn to your mother,” said Wency Ortega, who helped organize a virtual online rosary June 27 for students, teachers, families and alumni of Christopher Columbus High School. “And in turning to our Mother, we turn to Jesus.”

About 2,000 people tapped into Columbus’ virtual rosary, coordinated by a group of instructors and alumni of the Marist school in Miami. Taking part through YouTube, LinkedIn and Facebook Live, they were knitted together via the StreamYard platform.

Individuals submitted their own intentions in chat boxes. They also prayed for members of a half-dozen families in the school’s “greater family” who remained missing.

As of July 1, at least 18 people were confirmed dead and authorities put the number of those still unaccounted for at 145. Miami-Dade County’s mayor said two of the 18 fatalities were children, ages 10 and 4.

Other schools also have held or planned their own rosaries. On June 28, Belen Jesuit Preparatory School in Miami drew 300 people to a “Prayer for Surfside.” Seated in the campus’ Roca Theater, they also heard words of encouragement from Jesuit Father Guillermo Garcia-Tuñon, school president.

Father Garcia-Tuñon first prayed for victims of the building collapse, as well as those who were still missing. Standing next to a statue of Our Lady of Belen, he also explained why the rosary was the chosen vehicle for such prayers.

Our Lady of Lourdes Academy announced a rosary for July 1, the one-week anniversary of the building collapse. The event, on Instagram Live, was planned especially for families who were still awaiting news of their loved ones — uncles, aunts, cousins, grandmothers and others.

“Each decade (of the rosary) will be for one of the families,” Lourdes Academy spokesperson Olga Martinez said ahead of the rosary. Different representatives from the community were to represent the families during the prayers.

Faculty and staff have been collecting donations for the affected families at Lourdes, Martinez said. She added that the school’s president, Sister Carmen Fernandez, an Immaculate Heart of Mary sister, has offered support to them as well.

The experience of community has been a vital part of the group prayer, according to Thomas Kruczek, president of Columbus High School, who gave a welcome address the night of June 27.

“It felt good as a Catholic family to do the rosary,” he told the Florida Catholic, newspaper of the Miami Archdiocese. “All of us felt helpless as we saw the videos, and read the newspaper. (But) prayer is something we do. This is a way of serving the community.”

Ironically, the speedy birth of the Columbus High School rosary was a byproduct of the COVID-19 pandemic. Fifteen months ago, a 1988 alumnus, Dr. Glenn Barquet, a cardiologist, took ill with the virus, then died.

His 1988 classmates began nightly prayer meetings on Zoom, at first just among themselves, then including friends. The virtual congregation grew to 150.

Some even began logging in from sites as diverse as Austin, Texas, the District of Columbia, Venezuela and the Dominican Republic. “Afterward, we’d stay on for three or four hours, reconnecting with people we hadn’t spoken to in many years,” Ortega said.

After Barquet died, his wife and children asked the class of 1988 to continue the nightly rosaries, according to Ortega. “They said the rosary helped them, comforted them, gave them strength to go through the mourning process.”

Each night, one of the 1988 alumni leads the prayers, with 15 to 25 regular attendees, Ortega said.

Davis writes for the Florida Catholic, newspaper of the Archdiocese of Miami.