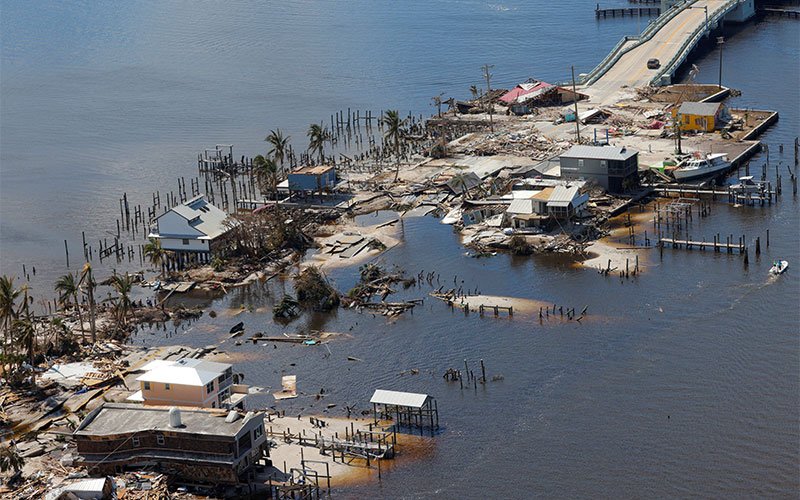 WASHINGTON (CNS) — As authorities in Florida continued rescue efforts, Catholic parishes and dioceses in the U.S. moved rapidly to collect aid in the aftermath of Hurricane Ian, and U.S. President Joe Biden said it could take years to rebuild what was destroyed.

Though Ian was downgraded to a tropical storm after wrecking swaths of Florida, it regained strength and regrouped as a hurricane before heading toward South Carolina.

Biden approved an emergency declaration to send federal help before it made landfall in Charleston Sept. 30. Residents of Florida and the Carolinas face a recovery estimated to cost tens of billions of dollars.

As of Oct. 2, at least 80 people were confirmed dead, and more than 1,600 people had been rescued in parts of southwest and central Florida.

The Diocese of St. Petersburg, Florida, will hold a special collection at its parishes in October to help with the damage, including in the neighboring Diocese of Venice and is asking for others to help at https://www.dosp.org/disasterrelief.

“Our hearts are moved with compassion for all those who have suffered damage and destruction due to Hurricane Ian, especially our brothers and sisters in the Diocese of Venice,” St. Petersburg’s Bishop Gregory L. Parkes said of the diocese that suffered the brunt of the damage.

Archbishop José H. Gomez of Los Angeles, president of the U.S. Conference of Catholic Bishops, called on Catholics and all people of goodwill to pray for those who lost their lives in the Caribbean and the southwest United States due to Hurricane Ian.

He urged prayers “for the comfort of their grieving families and communities” as well as prayers for those who have lost their homes and businesses. “May they find peace and comfort in God’s enduring love for us, even amid these most trying circumstances,” he said.

In a statement released late Sept. 30, the archbishop also prayed the emergency responders would be kept “from harm as they seek to bring relief, comfort and healing” to storm victims.

At a news conference Sept. 30, Biden told Floridians that the federal government would do all it could to help, particularly to rescue people and other recovery efforts.

He also announced that 44,000 utility workers were working to restore electricity for those left without power since the hurricane struck.

In preparing for Ian, the Florida Division of Emergency Management said it had coordinated with utility companies to make sure crews were prepared “to respond and restore power.”

As of Oct. 2, 590,000 people were still without power in Florida, but that figure was a significant reduction from the nearly 2 million who had no power immediately after Hurricane Ian struck.

“It’s not a crisis for Florida, it’s an American crisis,” Biden said during the news conference.

He said the situation on the ground was “far more devastating” than initially believed and “is likely to rank among the worst in the nation’s history.”

The president and first lady Jill Biden were visiting Puerto Rico Oct. 3 to see the devastation wrought by Hurricane Fiona, which slammed into the island a week before Ian hit Florida. The Bidens planned to visit Florida Oct. 5.

In the Diocese of Venice, Bishop Frank J. Dewane gave thanks via Twitter for those who prayed for people in the path of the Hurricane Ian.

“Damage is still being assessed, but it is clear that the devastation in the Diocese is widespread,” he wrote. “There are several crews already at work throughout the Diocese, and Catholic Charities is putting their local team into action. We are grateful for all those who have helped, and continue to help, during this difficult time.”

In Charleston, South Carolina, Bishop Jacques E. Fabre-Jeune offered Mass hours before the storm made landfall “for the protection of all people affected by Hurricane Ian and especially for our essential personnel working to keep us safe,” the diocese said on its Facebook page.

Ian hit close to 2:30 p.m. local time Sept. 30 as at Category 1 hurricane, flooding historic Charleston, with maximum sustained winds of 85 mph. The storm was later downgraded to a tropical storm as it hit North Carolina.

As the storm went through the Carolinas, about 850,000 people had no electricity but news reports said power was restored to more than half of them by the weekend.