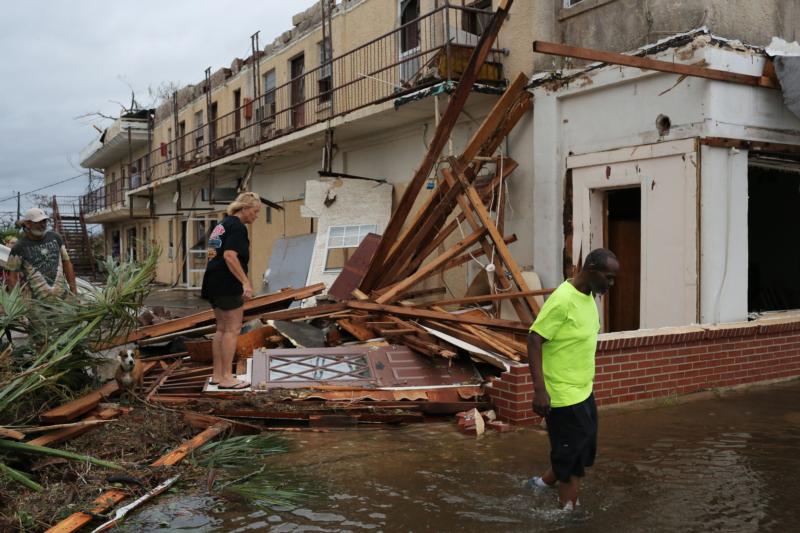 Residents walk amid debris and floodwaters Oct. 10 after Hurricane Michael swept through Panama City Beach, Fla. The Category 4 storm raged through the Florida Panhandle into Georgia Oct. 10 as the most powerful storm to hit the continental United States in decades, turning homes into piles of lumber and flooding subdivisions. (CNS photo by Michael Anderson/EPA)

PANAMA CITY, Fla. (CNS) — With EMS service suspended in some parts of Florida as Hurricane Michael made landfall Oct. 10 in the state’s panhandle area with sustained winds clocked at 155 mph, at least least two dioceses offered prayers for those in the Category 4 storm’s path.

The Diocese of Pensacola-Tallahassee, whose territory is directly in the hurricane’s path, closed its pastoral center at noon Oct. 9 and said on Facebook it would stay closed until Oct. 11.

The diocesan Facebook page also invoked the intercession of St. Michael the Archangel, and published a prayer to the saint.

“St. Michael the Archangel, defend us in battle; be our safeguard against the wickedness and snares of the devil,” the prayer says. “May God rebuke him, we humbly pray: and you, O prince of the heavenly hosts, by the power of God, cast down to hell Satan and the other evil spirits, who prowl through the world for the ruin of souls. Amen.”

The Diocese of Venice, whose territory is along the western, or Gulf, coast of Florida, posted a “Hurricane Prayer” on its website, which soon migrated onto Twitter and was retweeted.

“O God, master of this passing world, hear the humble voices of your children. The Sea of Galilee obeyed your order and returned to its former quietude. You are still the Master of land and sea,” the prayer begins.

“We live in the shadow of a danger over which we have no control: the Gulf, like a provoked and angry giant, can awake from its seeming lethargy, overstep its conventional boundaries, invade our land, and spread chaos and disaster. During this hurricane season we turn to you, O loving Father,” it says.

“Spare us from past tragedies whose memories are still so vivid and whose wounds seem to refuse to heal with passing of time. O Virgin, Star of the Sea, our beloved Mother, we ask you to plead with your Son on our behalf, so that spared from the calamities common to this area and animated with a true spirit of gratitude, we will walk in the footsteps of your Divine Son to reach the heavenly Jerusalem, where a stormless eternity awaits us. Amen.”

The sheriff’s office in Bay County, home to Panama City — where Michael made landfall — issued a shelter-in-place order before dawn Oct. 10.

It is not known how many people ignored evacuation orders or refused to evacuate; more than 375,000 residents were targeted for the order.

Even before it weakens, Michael’s path will head into Georgia and likely the Carolinas before it dissipates, its northern edge skirting much of the Atlantic shoreline of Virginia and Massachusetts and the Canadian provinces of Nova Scotia and Newfoundland before it makes an easterly trip across the Atlantic Ocean toward the British Isles.

Meteorologist Dennis Feltgen of the National Hurricane Center posted on Facebook, “The historical record, going back to 1851, finds no Category 4 hurricane ever hitting the Florida panhandle.”

The Associated Press reported that Tyndall Air Force Base just south of Panama City ordered out all but essential personnel, and flew all the bases aircraft hundreds of miles away as a precaution. The base is home to about 600 military families.