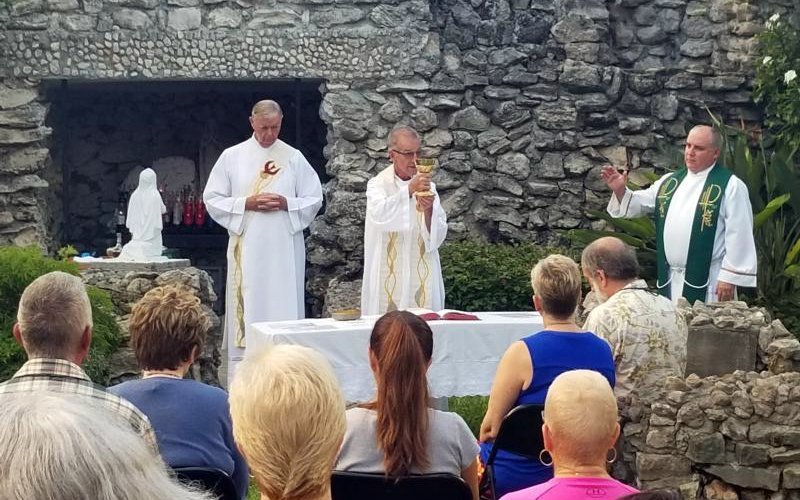 Father John Baker, pastor of the Basilica of St. Mary Star of the Sea in Key West, Fla., celebrates an early morning Mass Sept. 7 at the basilica's grotto with special prayers for safety before Hurricane Irma. At left, is Deacon Peter Batty and at right is Father Juan Rumin Dominguez, both from the basilica.

WASHINGTON (CNS) — As Hurricane Irma was bearing down closer to Florida, residents who had not evacuated from Key West, did what many of them have done before with predicted hurricanes. They gathered to pray at the grotto dedicated to hurricane protection.

Days after the hurricane’s path was announced, people began streaming to the outdoor stone grotto at all hours, leaving notes, lighting candles and simply quietly praying.

The grotto, named Our Lady of Lourdes Shrine, on the grounds of the Basilica of St. Mary Star of the Sea, has been a source of spiritual refuge against storms since it was dedicated in 1922 for that purpose. It was spearheaded by Sister Louise Gabriel, a Sister of Holy Names of Jesus and Mary, who wanted the devotional spot at the parish to protect the island from destructive hurricanes.

According to the history of the grotto, Sister Gabriel said at its dedication that as long as the grotto stood: “Key West would never experience the full brunt of a hurricane,” which has been true since from that time.

Father John Baker, the basilica’s pastor for the past 10 years, said the grotto, with its statue of Bernadette and one of Mary high above in the rocks, attracts Catholics and non-Catholics alike. One woman told him years ago that she was not Catholic or Christian, but she loved going to the grotto for its sense of peace.

As the pastor sees it, the grotto symbolizes people’s faith, their belief “that they can get through this.”

A group of about 70 people attended an early morning Mass Sept. 7 at the grotto for special prayers before Hurricane Irma. Key West, often in hurricanes’ paths, had been under a mandatory evacuation order, which not everyone was heeding.

Father Baker, who has weathered a number of storms, said he and another priest at the parish were staying “to be present” with those who staying on the island.

He said it had been extremely quiet, in that quiet before the storm mode, and that those who remained were supporting each other. Hardware stores were empty as many had boarded up their windows. The basilica, built in 1904, has never been damaged by a hurricane.

When asked if he would pray more during the storm, Father Baker laughed and said he prays all the time. He also said he would not let fear overtake him. “People have to say: ‘I can’t get into that mode,'” he told Catholic News Service Sept. 7.

He planned to go to the highest level of the rectory and wait out the winds and rain and then once it was over, he would immediately get to the task of cleaning up.

Right after the eye of the storm, he said the barometric pressure drops and “you don’t know which way the wind is blowing.”

“You have to get through it with a kind of sanity and peace, knowing God is with you,” he said.
– – –
Follow Zimmermann on Twitter: @carolmaczim.