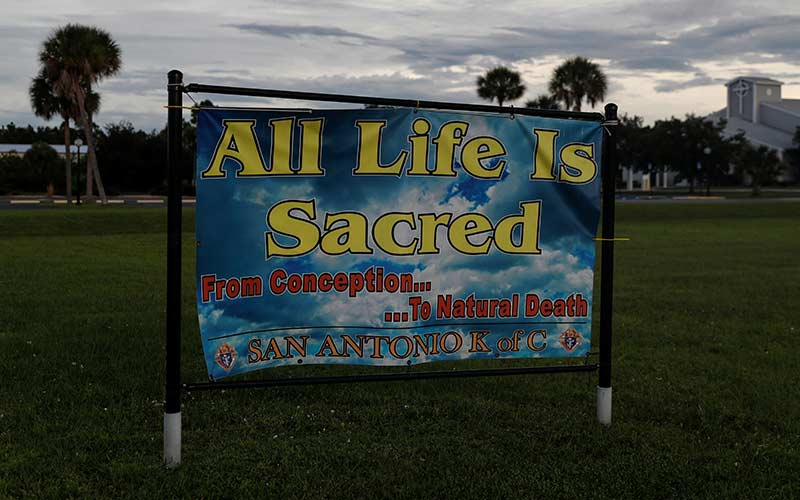 A pro-life sign is seen outside San Antonio Catholic Church in Port Charlotte, Fla., Sept. 20, 2021. On April, 14, 2022, Florida's Catholic bishops praised Gov. Ron DeSantis for signing into law a 15-week ban on most abortions. They also welcomed a judge's ruling of a week earlier that upheld a 2015 law requiring a woman seeking an abortion to wait 24 hours before obtaining one. (CNS photo by Shannon Stapleton/Reuters)

TALLAHASSEE, Fla. (CNS) — Gov. Ron DeSantis April 14 signed into law a measure that limits most abortions in Florida to the first 15 weeks of pregnancy.

The state’s Catholic bishops praised DeSantis for his “commitment to defend unborn children and their mothers” and for his leadership in encouraging the Legislature to take up the bill and pass it and for his own support of the measure.

About a week earlier, the bishops welcomed a judge’s ruling upholding a 2015 state law that gives women 24 hours to reflect on information provided by physicians before proceeding with abortions.

Regarding the 15-week abortion ban, the “historic law,” as the bishops termed it, takes effect July 1 and includes provisions to improve infant health and to analyze and reduce fetal and infant mortality. It replaces a previous law that allowed abortions until 24 weeks of pregnancy.

In a statement released April 14 by the Florida Conference of Catholic Bishops, the prelates also commended the state’s legislative leaders, especially Sen. Kelli Stargel and Rep. Erin Grall, both Republicans, who sponsored the bill, known as H.B. 5.

“(They) courageously accomplished the difficult task of advancing the bill through the committee process and floor debate in the Florida House and Senate,” the bishops said.

“While there is still work to be done, today’s bill signing marks significant progress toward full legal recognition of unborn children,” they said. “Additionally, the bishops of Florida remain committed to supporting mothers in need during their pregnancies through parishes and other ministries, and the network of pregnancy centers across Florida.”

The new law includes exceptions for severe fetal anomaly or to save the mother’s life or prevent a serious risk of substantial and irreversible physical impairment of a major bodily function of the pregnant woman other than a psychological condition. It does not make exceptions for cases of incest or rape.

H.B. 5 “protects babies in the womb who have beating hearts, who can move, who can taste, who can see and who can feel pain,” DeSantis said in a statement. “Life is a sacred gift worthy of our protection, and I am proud to sign this great piece of legislation which represents the most significant protections for life in the state’s modern history.”

Lynda Bell, president of Florida Right to Life, was present at the signing ceremony. The state pro-life organization is an affiliate of National Right to Life and worked with state legislators to see the bill enacted.

“No unborn child should suffer and die from an abortion,” said Carol Tobias, president of National Right to Life. “Florida’s law will protect unborn children and their mothers from the horrors of abortion.”

Susan B. Anthony List’s president, Marjorie Dannenfelser, echoed Tobias and the Florida bishops in praising DeSantis and lawmakers, calling the new law “a milestone victory for women and children.”

It “may save more than 3,300 lives a year by protecting unborn children, as well as their mothers, from cruel and dangerous late abortions.”

On April 8, Judge Angela Dempsey of Florida’s 2nd Judicial Circuit Court granted the state’s motion for summary judgment on a 7-year-old law requiring a 24-hour waiting period before a woman seeking an abortion goes through with it.

Then-Gov. Rick Scott signed the waiting period measure into law in 2015, but it was immediately challenged on constitutional grounds by supports of legal abortion, which led to years of back-and-forth court actions.

The law gives women 24 hours to reflect on information provided by their physician on their initial visit before proceeding with an abortion.

Dempsey rejected the plaintiffs’ constitutional challenges to the law and argued that “it is now clear that similarly invasive procedures are typically subject to de facto waiting periods.”

“The act merely brings abortions in line with the standard of care,” she said.

The law also has exceptions for “documented cases” of rape and incest and when the life of the mother is at risk.

The judge also noted there are longer waiting periods for other life decisions such as getting married, getting divorced and buying a gun.

“The 24-hour reflection period is a reasonable measure that will empower women to make truly informed, deliberate decisions apart from the abortion industry’s pressures,” said Christie Arnold, associate for social concerns and respect life at the Florida Conference of Catholic Bishops.