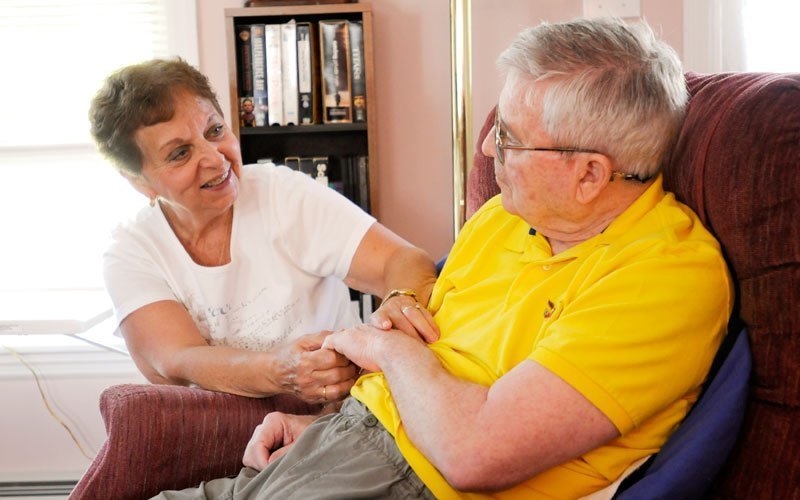 Rose Carnegie holds her husband Bill’s hand and smiles as he makes eye contact with her Aug. 27 at their home in Pine City. Billsuffers from Alzheimer’s disease and depends on his wife and home health aides for all of his needs.

Rose Carnegie began noticing the changes in her husband a year after he retired, slightly more than a decade ago. She”d often call Bill from work and remind him to perform simple tasks, but he either forgot to do them or wasn”t able.

“The pool needed to be vacuumed and the directions were on the shed. And he couldn”t do it,” she said.

One day Rose approached a golfing buddy of Bill”s after Mass at Elmira”s St. Mary Southside Church, and asked if their playing group had noticed anything unusual.

“He just got this look on his face — ”We didn”t know what to say to you, but Bill has changed,”” Rose recalled. The friend explained that Bill had begun forgetting to pick up his golf clubs, and would become unusually angry at his buddies before storming off to play by himself.

That conversation prompted Rose to get medical attention for Bill, and two doctors confirmed that he had Alzheimer”s disease. The ensuing years have brought gradual decline into what is now the disease”s late stage. Although he”s otherwise in good health, Bill, 74, smiles occasionally but barely talks. He spends most of his days sitting in his chair and sleeping. He only calls a couple of people by name — and his wife isn”t one of them.

“He”s totally dependent on me to feed him and change him. I finally had to retire, because he couldn”t be left alone,” said Rose, 69, adding that their three grown children do all they can to help but are busy with families of their own. So day in and day out, Bill”s needs fall on her shoulders.

Such are the challenges of living with Alzheimer”s, a progressive disease that erodes the brain”s memory cells, causing gradual memory loss, personality changes, and diminished ability to comprehend and speak. There is no known cure for the condition which, according to the Alzheimer”s Association, affects an increasingly wide population that now stands at 5.2 million in the United States alone.

Public concern appears to be high as well, judging from the audience of 70-plus that attended a two-hour information session on Alzheimer”s and dementia Aug. 6. It took place at the parish center of St. Mary Church and was led by Todd R. Goddard, education coordinator for the Rochester Alzheimer”s Association”s Learning Institute.

“He was there for almost an hour after the meeting broke,” said Deacon George Welch, chaplain of St. Joseph”s Hospital, noting that Goddard was peppered with questions about the effectiveness of certain medicines; legal issues; how to tell if somebody is in the beginning, middle or end stage of Alzheimer”s; and whether participants might actually have it themselves.

Deacon Welch and Father Jeff Tunnicliff, parochial vicar of St. Mary Parish, organized this inaugural session of a new ministry that reaches out to families affected by Alzheimer”s. The next meeting was due to take place Sept. 3 from 6:30 to 8:30 p.m. at St. Mary, with Goddard addressing how a parish can help Alzheimer”s patients and their caregivers. Deacon Welch said further sessions will be held over the next several months, on the first Wednesday and at the same time and location. They are free and open to all.

Rose attended the Aug. 6 meeting and also will take part in the Alzheimer Association”s Memory Walk on Oct. 4 at Elmira”s Eldridge Park. It is one of two such walks scheduled in the Southern Tier; the other is Sept. 27 at the Centerway Square in Corning. In her past four Memory Walks, Rose and her teammates have raised approximately $12,000.

Rose said she hopes for greater governmental funding of Alzheimer”s research, as well as a willingness by the general public to learn more about the disease and erase misconceptions. For instance, she remarked that “we have friends we haven”t seen in years. They”re uncomfortable; maybe they think it”s contagious. It”s very hurtful to have people you were close to, and not hear from them again.”

Yet the hardest part for her regarding Bill “is just sitting here looking at him, and realizing what could have been,” she said, beginning to sob. “We had plans to retire. You work hard all your life — and the year after you retire, this happens.”

“When you face Alzheimer”s, you”ve got to have faith. It”s so insidious,” Deacon Welch said, acknowledging “all the little deaths that happen — the loss of functioning, the loss of being able to do things.”

Rose said despite the hardships, she resists the notion of placing her husband in a nursing facility.

“Everybody handles it in different ways; there are no guidelines to go by. I want to keep him here as long as I can, forever. We were married 48 years in July, and I take my vows seriously — ”in sickness and in health,”” she explained.

She also emphasized that she derives many rewarding moments from watching television with Bill, talking to him and showing him photographs from his past.

“Just seeing him smile and say something, it makes me feel good,” she said.