Follow Christ on the path of forgiveness, not vengeance, pope says - Catholic Courier 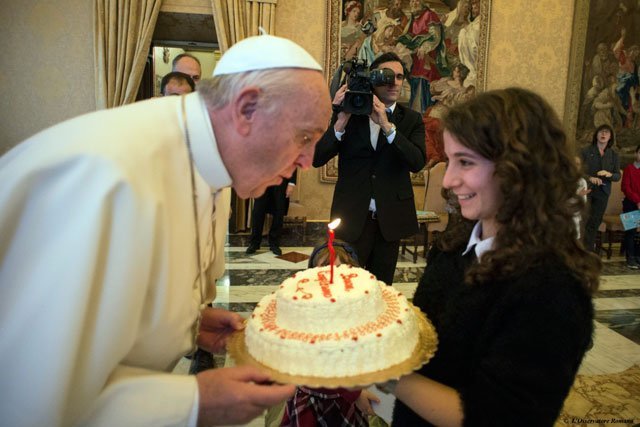 Pope Francis blows out the candle on a birthday cake presented by a young member of the Italian branch of Catholic Action during an audience with the group at the Vatican Dec. 17. The pope celebrated his 79th birthday Dec. 17.
By Junno Arocho Esteves
Catholic News Service
VATICAN CITY (CNS) — To follow a path toward Christ, one must follow the good path of forgiveness, peace and solidarity, and avoid following the evil path of vengeance, war and selfishness, Pope Francis told hundreds of Italian children.
The members of Catholic Action’s children’s section, parish-based groups of young people from 4 to 14 years of age, spent the year on various projects that aided migrants in the Italian diocese of Agrigento.
Upon the pope’s arrival, the youth sang "Happy Birthday" and presented him with a cake for his 79th birthday Dec. 17 during his traditional pre-Christmas audience with them.
The pope blessed and thanked the youth for their work with migrants, saying that they welcome in an exemplary way "so many brothers and sisters who arrive full of hope, but are also wounded and in desperate need of so much, including peace and bread."
"You can offer a special contribution to this initiative with your enthusiasm and prayer, which I advise you to accompany with a small sacrifice, to share their essentials with others who do not have them," he said.
Departing from his prepared speech, the pope asked the youth what would they do if they had two candies and their friend had none. "I’ll give him one," a child responded.
"And if you have one candy and your friend has none, what do you do?" he asked. "Half!" another child exclaimed.
"Yes, half. Very good! Go forward this way," the pope said.
After thanking the leaders of Catholic Action’s Italian branch, Pope Francis led the group in praying the "Hail Mary" and thanked them for their "commitment and dedication to Christian education."
Copyright © 2023 Catholic News Service, Inc. All rights reserved. Linking is encouraged, but republishing or redistributing, including by framing or similar means, without the publisher's prior written permission is prohibited.