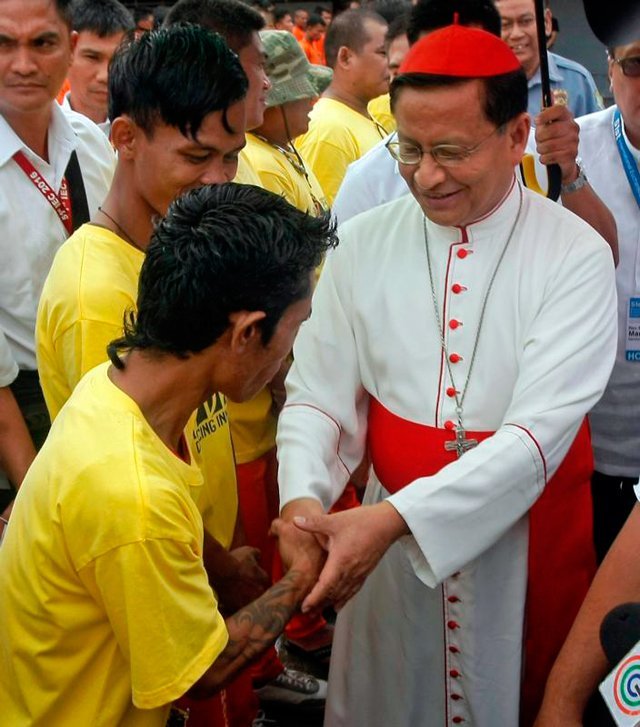 Cardinal Charles Bo of Yangon, Myanmar, is greeted by Filipino inmates at a prison facility in Cebu, Philippines. The famous dancing inmates of the Cebu Provincial Detention and Rehabilitation Center showcased their wares with a Christian-themed dance number performed for the papal legate in the 51st International Eucharistic Congress.

The pope’s envoy to the congress, Cardinal Charles Bo of Yangon, Myanmar, told reporters Jan. 27 that the Eucharist should compel people to share with the less fortunate. He said that was why he declared a third world war on poverty days before, while celebrating the opening Mass for the Jan. 24-31 congress.

Cardinal Bo said the church, all religions and the government should have a system under which resources are shared between the rich and the poor.

Archbishop Jose Palma of Cebu added, "We have seen images of the Holy Father really doing this … Reaching out to the prisoners, to the poor. And expect, for instance, certain revisions in the Curia that would even manifest this love for people. Even the declaration of the Year of Mercy is also one way of making us aware that at the heart of Christianity should be the spirit of sharing love."

Cardinal Bo added that in meetings with "many Christian leaders" of other denominations and also leaders of other religions, they have told him that in the world there is no other leader like Pope Francis.

"So if their churches as well as their governments and all the leaders in the world were to follow the example of Pope Francis, that could be a solution: going to the peripheries," said the cardinal.

During the briefing, Cardinal Bo also said his country has only 800,000 Catholics, even though the faith has been there for 500 years. He said the Philippine church has been helping Myanmar’s Catholics in communication efforts for evangelization.

He also said in his report to the pope after the Congress, he would remember "the warmest welcome I have received, second, the good Filipino food and, third, the Filipino smiles."

Cardinal Bo said the main message would be, "in spite of all the natural disasters, the only thing that remains mainly with the Filipinos is the faith of the people: faith in the church, faith in the Eucharist and their faith in the Lord."