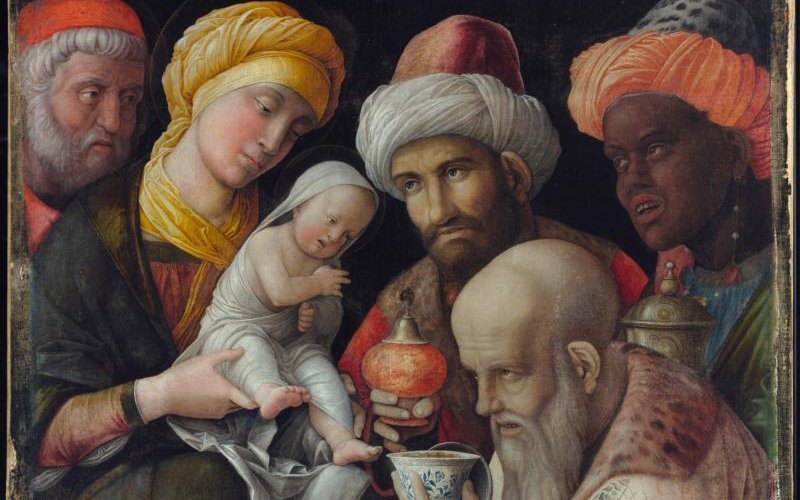 This is an image of Italian artist Andrea Mantegna's 15th-century painting "Adoration of the Magi." "We saw his star at its rising, and have come to do him homage," explain the wise ones. (CNS photo courtesy The J. Paul Getty Museum)

Night was falling at the end of a gray day. A few dozen silent, shabby figures were sitting at round tables waiting. I walked through the dining hall into the little chapel beyond, for the door was wide open. Nobody was required, everybody invited, to attend the vespers service before the neighborhood meal was served.

The 15 people gathered in the darkened chapel were singing, in various degrees of relationship to the melody, for vespers was already well underway. Some were volunteers, some “regulars” who came to eat at this urban mission to the poor.

The priest lit a tall beeswax candle. Holding it high above our heads, he proclaimed: “Behold the light of the universe.”

And the light of the candle illuminated everything: the worn-out coats and equally worn-out faces, the eyes intent on prayer books or raised to the flame, the insignificant little huddle of humanity in the midst of a restless modern city.

Sometimes we shy away from the light, afraid of what it will reveal; sometimes we long for it to show us what is going on and help us find the way. “Flood the path with light,” my mother used to pray when it was hard to figure things out; she had read this prayer of St. Augustine and was not afraid to use it.

The light of Christ shines on whatever is in our hearts so we may be seen as we really are — not for our shame and detriment, though we may feel that way at times, but for our healing and salvation. Physical light shows what is. Divine light shows also what is possible. Faith receives and follows the light.

When we see with faith, we see things as they really are — though we grasp them only brokenly. When we will meet God face to face, St. Paul tells us, we will see clearly what we now can get only a glimmer of (1 Cor 13:12).

It is faith that gives us that glimmer. And as our faith grows, so does our inner vision: Our hearts grow, too. It is those who are clean of heart, the Gospel tells us, who will see God (Mt 5).

“We saw his star at its rising,” the wise ones from the east told the government leader of their day, after Jesus’ birth. The Magi were following the “star of wonder, star of night,” of which we sang at Christmas. That star shone on all, on the Magi, on King Herod, on Joseph and Mary.

How differently they moved under its light. The Magi, who were wise enough to seek the truth, took advantage of the star to move farther on their journey. They followed the star’s light to the hidden, lowly place where an insignificant Jewish woman was caring for her little child.

“We saw his star at its rising, and have come to do him homage,” explained the wise ones. They did not follow power and wealth, which would have brought them back to Herod. He too was moved by the light, once it was shown to him, but he was moved to violence and brutality, for the purpose of shoring up his own position and power.

Following the light means moving. We cannot stay where and as we are; we must prepare to be changed. In the epistle for the feast of Epiphany (Eph 3), St. Paul points out that those who were thought to be outside Christ’s promise are now revealed to be “coheirs, members of the same body and copartners.”

It would be hard to imagine a greater intimacy than these terms suggest. The light might show us something new about those we are inclined to think of as outsiders, as “the other,” or as “less than” ourselves. Following it might mean coming closer to them.

Following the light means doing. “He shall have pity for the lowly and the poor,” says the psalm of the day (72). Like the Magi, and even like Herod, we cannot follow Christ’s light without moving closer to those who are lowly in the world. What will we do then?

Herod attacked them; the Magi honored them. Pope Francis has asked us to encounter the poor person, to see each one as they really are, “to discover their inner goodness” and “true needs” — in short, to learn to love. That is the kind of work the light enables us to do.

Following the light ultimately, in this life, will mean having the courage, like the priest at vespers, to profess against evidence that the light enlightens all.

The light of Christ illuminates all, equally. “They were overjoyed at seeing the star,” Matthew’s Gospel tells us of the Magi. How we follow the light is up to us to find out.

(Marrocco is a theologian, writer and practicing psychotherapist. She is involved in spiritual formation of seminarians and lay pastoral workers in Toronto and founded St. Mary of Egypt Refuge, a place of hospitality and welcome for people in need. She is an ecumenist who specializes in the relationship between Eastern and Western Christianity.)