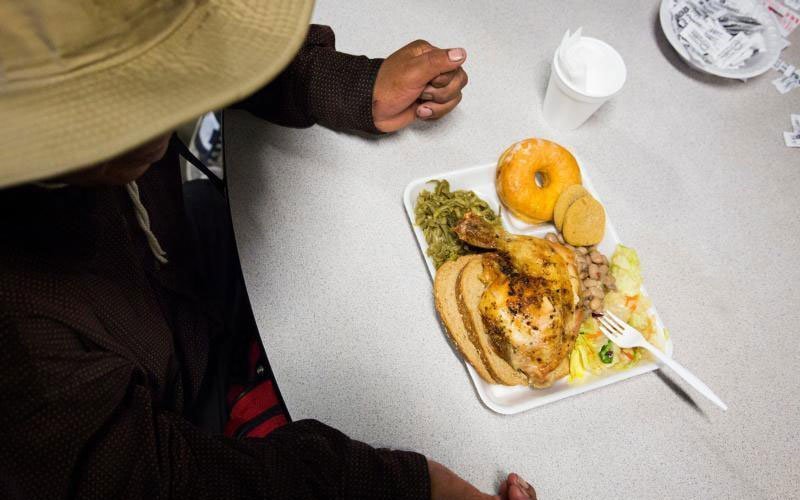 A man sits down to a meal at the St. Vincent de Paul Society dining room in Phoenix in this 2016 photo. Food connects us to our beliefs, our communities, our ancestors. (CNS photo by Nancy Wiechec)

A Catholic take on food culture

Food in Scripture: A sign of God’s love and steadfastness

There is an ever-growing “food culture” today. The constant barrage of food advertisement, blogs and television shows fuel a “food obsession.”

Yet food connects us to our beliefs, communities, ancestors. “Do not work for food that perishes but for the food that endures for eternal life,” Christ says.

Food seen in Scripture is often a prefigurement of the Eucharist, the bread of life.

A Catholic take on food culture

Probably no one has expressed the place of food in life better than American writer and gastronome Mary Frances Kennedy Fisher.

“First we eat, then we do everything else.”

From a spiritual point of view, Catholics might say, first the Eucharist, then everything else.

Food is first and foremost sustenance. We need it to nourish our body.

But it is also ritual and heritage. Food connects us to our beliefs, our communities, our ancestors.

From the important Jewish Passover to the fad of Taco Tuesday, humans have made food central to human celebration and socialization.

Christians are called to treat food like all of God’s gifts, with respect and gratitude, and to avoid overindulgence and waste. Yet temptations abound!

How many will admit they want to try each and every flavor of Kettle Brand potato chips? Yep, your hand is up. Who can resist the maple-bacon flavored ones?

Americans eat too much and not the right foods, according to the U.S. government office that tracks our nation’s overall health. We tend to pick processed packaged foods over fresh produce, meats and dairy.

The average daily calorie intake for Americans is around 3,770 — much higher than the recommended average of about 2,000 calories per day for women and 2,400 for men. More than half of Americans have preventable, diet-related chronic diseases.

Interestingly, while most of us consume more than enough food, 13 million U.S. children still live in households that don’t get the nutrition they need.

Systems of production, distribution and consumption fall short when food is viewed from a global perspective. About one-third of all food produced for humans is lost or wasted, according the United Nations Food and Agriculture Organization.

“Whenever food is thrown out it is as if it were stolen from the table of poor, from the hungry,” Pope Francis has observed.

He called hunger and malnutrition in the world a scandal and has asked all people to reflect on the problem of wasted food and to identify ways to address it.

To kick start your hunger awareness and ways you can help, check in with Catholic Relief Services (www.crs.org) or your local chapter of the Society of St. Vincent de Paul. They are experts at what it takes to beat back hunger.

Although we must eat, we also must try to avert our gaze from the constant barrage of food messaging, advertisement and promotions. (Try avoiding the food samples on your next trip to the big-box warehouse. Not easy, is it?)

It’s good to remember that food is temporal and that satisfaction on earth means nothing in God’s greater plan for us.

“Do not work for food that perishes but for the food that endures for eternal life,” Christ tells us. “I am the bread of life; whoever comes to me will never hunger, and whoever believes in me will never thirst.” (Jn 6:27, 35)

While celebrating Mass in America’s agricultural heartland in 1979, St. John Paul II reminded all that hunger would persist even if everyone had their full.

“Farmers everywhere provide bread for all humanity, but it is Christ alone who is the bread of life. ‚Ä¶ Even if all the physical hunger of the world were satisfied, even if everyone who is hungry were fed by his or her own labor or by the generosity of others, the deepest hunger of man would still exist. ‚Ä¶ Therefore, I say: Come, all of you, to Christ. He is the bread of life. Come to Christ and you will never be hungry again.”

Catholics come to the eucharistic table to receive the body and blood of Christ; to be one with him and to be one with each other, his followers, the community of faithful. We are sent to go into the world and share that gift of Christ.

In all that is asked of us, we can squeeze in a few small practices to be more conscious of temporal and spiritual hunger.

We can pause after Communion to recall all who hunger and offer a prayer that they too might be filled with the grace of God through Christ Jesus.

Likewise, when feeling hunger pangs or simple cravings, let’s sit still for a moment, recall God’s gifts and be thankful for his Son and everlasting life.

That bag of chips can wait.

Food culture is nothing new to Jeff Young, founder of the Catholic Foodie blog and podcast.

“I grew up in southeastern Louisiana. If we’re not eating, we’re talking about eating. That’s just the way it’s always been.”

Young, whose blog mixes spiritual observations with recipes, also has a keen perspective about Catholics’ relationship to food: “Food plays a very important role in salvation history, starting with the eating of the fruit from the tree of knowledge.

“It’s one of the most intimate acts you can have. It’s the prefigurement of the Eucharist and prefigurement of salvation. Every covenant in the Old Testament ended in a shared communal sacred meal.”

But beyond the theological message, Young says, “there’s something very, very important about sitting around a table. We open up to each other through food. There’s a shared intimacy there.

“It gives the best of who you are as human beings. It starts in Genesis from the very moment of the fruit of the truth, all the way to Revelation, and, we’re told, what are we preparing for? The feast of the lamb.”

Young wrote on his blog about a “mini-Passover” lamb chop dinner he shares with his wife and children every Holy Thursday before Mass: “This simple celebration has helped my family (and me) to better understand what happens at Mass and how awesome is the sacrifice and victory of Jesus for us.”

He’s also familiar with the lament of families that “we’re too busy for our own good.”

The solution, he thinks, is a return to Sunday dinners. “I’m trying to reinforce the importance of that shared time — that leisure time around the table, because we live in the world today that’s fast-food nation. Families hardly know each other.

“I think back to my childhood in the 1970s. My cousins, my aunts and uncles, we were all at my grandparents’ house, and that was everybody.” Young learned most of his culinary skills from his mother.

Food culture may have some aspects of religion, he thinks, but then it becomes a matter of how to direct one’s effort: “You can make something that’s really, really good, delicious and present it in just a way that’s beautiful, so your mouth is watering. A visceral reaction, you know? That’s power!

“And that’s what happens with these TV shows and celebrity chefs. There’s nothing new under the sun. It’s all a play on something else. There are no really new recipes.”

In addition to his blog, Young hosts a daily program on BroadboxMedia.com and co-hosts “Around the Table Food Show” on Catholic Community Radio in New Orleans and Baton Rouge.

“What a wonderful opportunity to evangelize. To meet people where they are. And if they’re fascinated by food, if they don’t know how to cook but would like to learn how, why not meet them right there. And slowly, over time, in little-bitty bites along the way, it may make an impact in their lives.”

Young’s recipe for his “mini-Passover” lamb chop dinner is available on his blog: http://catholicfoodie.com/holy-thursday-and-grilled-lamb-chops.

(Jensen is a freelance writer.)

Food in Scripture: A sign of God’s love and steadfastness

In disobeying this commandment — and seeking to be like God — Adam and Eve fell from grace and were expelled from the garden.

Adam and his children would forever toil for their food. When the Israelites escaped slavery in Egypt, and wandered the desert for 40 years, they became angry with God, worried they would starve. God let no such thing happen:

“I have heard the grumbling of the Israelites. Tell them: In the evening twilight you will eat meat, and in the morning you will have your fill of bread, and then you will know that I, the Lord, am your God” (Ex 16:12). As in the Garden of Eden, God provides food as a sign of his steadfastness and providential love.

We, too, are called to be hospitable. The Letter to the Hebrews states, “Do not neglect hospitality, for through it some have unknowingly entertained angels” (Heb 13:2).

Abraham entertained God in the guise of three men, telling them, “Now that you have come to your servant, let me bring you a little food, that you may refresh yourselves; and afterward you may go on your way” (Gn 18:5).

In being hospitable and charitable with our food and other blessings, we avoid avarice and gluttony. In giving of ourselves and our gifts, we are hospitable to the Lord.

It seems that any talk of food in Scripture is leading up to, and culminates in, the Eucharist as instituted by Jesus at the Last Supper. The Eucharist is a sacrament, which means it is more than a symbol — it enacts what it signifies.

It is spiritual food, and Jesus alludes to this when he says: “I am the bread of life; whoever comes to me will never hunger, and whoever believes in me will never thirst” (Jn 6:35).

The sharing of the meal, the eucharistic sacrifice, became so identified with Jesus that his disciples did not recognize him after the resurrection but in this act:

“While he was with them at table, he took bread, said the blessing, broke it, and gave it to them. With that their eyes were opened and they recognized him, but he vanished from their sight. … Then the two recounted what had taken place on the way and how he was made known to them in the breaking of the bread” (Lk 24:30-31, 35).

They finally recognize him — not just in the bread, but in the breaking of the bread, in the communal meal. This is the eucharistic sacrifice, shared in community as it was intended.

Food can be misused just as any earthly good can. It is not misused if we recognize it as a gift from God: an opportunity to be giving, to make sacrifice, to grow in holiness.

(Senz is a freelance writer living in Oregon with his family.)

Food draws friends and family together, she says, “around one table, creating community over a shared loaf of bread.” Most of all, food matters because bread and wine are transformed into the body and blood of Christ, “offered for us on a table like no other.”

“We need to think more deeply about food,” says Stimpson, and its connection to “friendship, community and hospitality.” Her blog and recipes are a way to “see food for what it is, and adjust our kitchens and habits accordingly.”