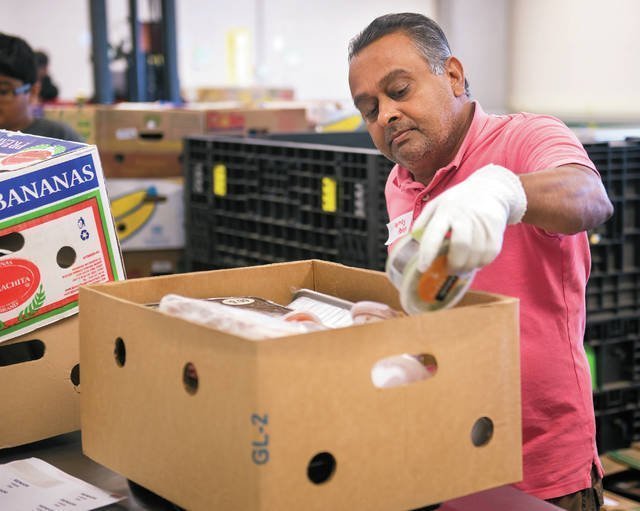 Volunteer Pankaj Patel boxes up meats at the Food Bank of the Southern Tier to be shipped to food pantries on July 20. 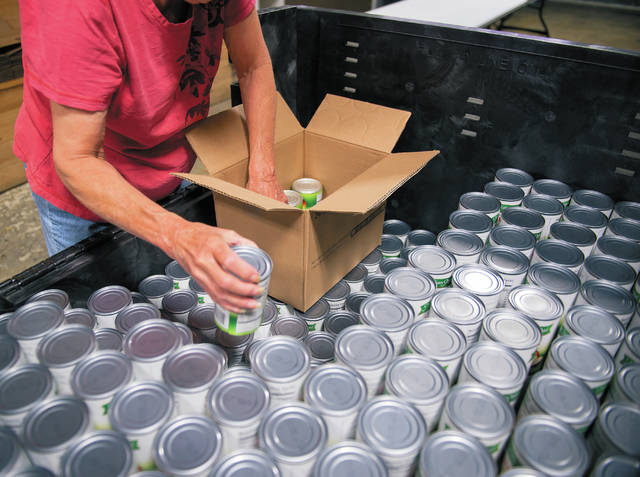 Volunteer Connie Breed sorts canned good items for the backpack program at the Food Bank of the Southern Tier on July 20.

Since many of the 200-plus food banks in the Feeding America network serve major metropolitan areas, they are notably larger than Food Bank of the Southern Tier.

Therefore, Natasha Thompson said, it never crossed her mind that her Elmira Heights-based organization might be considered for the national hunger-relief network’s top recognition.

Thompson, who serves as president and CEO of the food bank, was caught off guard in the most pleasant of ways while attending Feeding America’s annual conference, held in late April in San Diego. The Southern Tier agency, a ministry of Catholic Charities, was announced as Member of the Year, earning the distinction as the best food bank in the nation.

“I just know that it was a huge surprise. It’s typically given to some larger food banks,” Thompson said of the award, noting that recent recipients have come from Oakland (2016), Houston (2015) and Minneapolis/St. Paul (2014).

Thompson said she’s gratified that the national honor recognizes the quality of Food Bank of the Southern Tier’s efforts, rather that the size of its operation.

“One of the things I’ve always shared with my staff is, we don’t have to be the biggest food bank out there but we can be the best. And now, for 2017, we can say we’re the best,” she said.

On the other hand, Food Bank of the Southern Tier is far from tiny. When it moved in 2011 to its present facility at 388 Upper Oakwood Ave. from its former location on County Road 64 in Big Flats, the food bank more than quadrupled its operating space, with 65,000 square feet available for storage, repacking, distribution trucks and offices.

This extra room has allowed the operation to run more effectively and expansively in obtaining food from businesses and the local community — food that, many times, would otherwise go unused — and getting it to people who are hungry. The food bank partners with more than 165 food pantries, meal programs, shelters and other hunger-relief entities, including churches of various denominations. Its service territory covers nearly 4,000 square miles in Chemung, Schuyler, Steuben, Tioga and Tompkins counties in the Diocese of Rochester, and Broome County in the Diocese of Syracuse.

According to the food bank’s website, in 2016 it distributed 9.8 million meals as well as 2.2 million pounds of fresh produce. This was accomplished through such initiatives as the Mobile Food Pantry, by which trucks deliver food directly to host sites in rural areas; the BackPack Program, which provides healthy, easy-to-prepare food for children to use on weekends and holiday breaks; a summer meal program for low-income children; and Kids’ Farmers Market, by which young people receive fresh produce. Forty-one percent of the residents served by the food bank are children.

These programs are reflective of the food bank’s growth since its inception in 1981 on Grand Central Avenue in Elmira Heights. The food bank moved to Big Flats in 1994, and has gone from distributing 1 million pounds of food that year to more than 11.5 million pounds in 2016. In addition to the food it provides, the Southern Tier agency also prioritizes advocacy and education related to hunger.

Thompson emphasized that many entities are responsible for Food Bank of the Southern Tier’s success. She noted, for instance, that the time logged by volunteers adds up to some 50,000 hours per year. In addition, the food bank’s first-ever capital campaign — which ended in 2013 — brought in $5.82 million, exceeding its goal of $5.75 million.

“I’ve always said the food bank is able to do its work because of the incredible support we get from the community,” said Thompson, who has served as president/CEO since 2008 and has worked for the food bank 16 years overall. “There are so many individuals and organizations and businesses that have helped us succeed.”