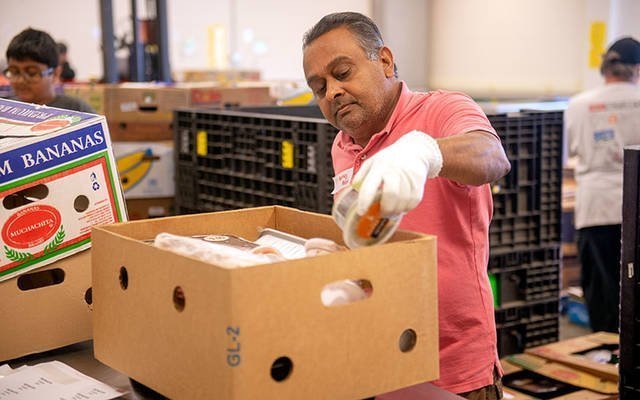 Lockdown restrictions due to the coronavirus pandemic have crippled folks’ ability to earn paychecks and, thus, put food on their tables.

In fact, Natasha Thompson, president and CEO of Food Bank of the Southern Tier in Elmira Heights, noted April 13 that since mid-March, its member pantries had seen an increase of some 51 percent in the number of people served across its six-county region.

Thompson observed that the current challenge to provide food is acute because it extends to all communities and for an indefinite period of time.

“Everyone’s in the same boat,” remarked Thompson, whose food bank is a ministry of diocesan Catholic Charities.

Thompson, along with Julia Tedesco, president and CEO of Foodlink in Rochester, said that their operations have been affected not only by a spike in demand for food, but also such challenges as enduring longer periods of delivery time from suppliers and the need for stricter safety measures to keep the virus from spreading.

And yet, Thompson and Tedesco said their food banks are thus far meeting the increased need.

That’s welcome news for residents in the Diocese of Rochester: Combined, Food Bank of the Southern Tier and Foodlink serve as food-distribution hubs for pantries, soup kitchens, shelters and other agencies — including many Catholic ministries — in 11 of the diocese’s 12 counties.

To address the higher demand, both food banks have instituted a number of drive-through sites for community food distribution. Outlets exist in each of the six counties served by Food Bank of the Southern Tier, including Chemung, Schuyler, Steuben, Tioga and Tompkins counties in the Diocese of Rochester. Foodlink, meanwhile, is offering 24 such sites throughout its 10-county coverage area that includes Monroe, Livingston, Ontario, Seneca, Wayne and Yates in this diocese. (Cayuga, the remaining county in the diocese, is served by Food Bank of Central New York.) Those wishing to access a drive-through facility should check their food bank’s website for location and preregistration details.

Thompson noted that more than 60 percent of the families accessing Food Bank of the Southern Tier’s food distribution sites are first-time clients. Meanwhile, Tedesco said April 13 that Foodlink staff and volunteers have been producing 10,000 packages of food — containing such nonperishable goods as pasta, sauce, tuna, oatmeal and soup — per week for the drive-up facilities. She added that Foodlink has significantly stepped up efforts to provide meals for school-aged children during the pandemic as well.

Food Bank of the Southern Tier and Foodlink are both member agencies of the national Feeding America food bank network. Thompson and Tedesco said there’s no immediate concern about running short on food, but acknowledged that the increased demand is taking its toll.

“We do keep a certain reserve inventory, but it is a challenge right now. And, our supply chains have been interrupted,” Tedesco said.

She and Thompson said that ministries for which they supply food are largely staying open. Many have adjusted their operations to limit the spread of COVID-19, such as instituting more aggressive cleaning efforts; increasing social distancing among volunteers and clients; providing food to go instead of sit-down meals; offering prepacked bags of food; and distributing food at clients’ cars or at facility entrances.

Thompson and Tedesco stressed that community financial support is crucial during this crisis; emergency response funds have been set up on both Food Bank of the Southern Tier and Foodlink websites. Meanwhile, a number of parish bulletins around the diocese are noting local ministries’ needs for donations of money, food and/or volunteer time.

The food bank presidents said they’re grateful thus far for the public’s willingness to help out during these difficult times.

“We’ve seen a huge response. Truly, the silver lining is the response of our community members,” Tedesco said.

“One of the reasons that gives me hope is what I’ve seen in the generosity of people, making sure that people in their community are getting fed,” Thompson said. “I think we’ll get through this because of the involvement of the entire community. We couldn’t do any of this without their support.”