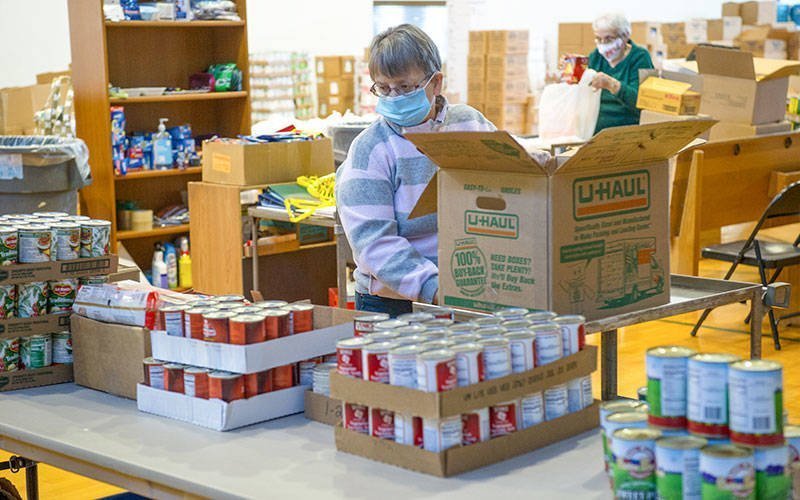 EDITOR’S NOTE: This is the third story in a series on the Nourish New York initiative.

The number of families struggling with food insecurity in the Elmira area has risen dramatically over the past 12 months, according to Mary Beth Prechtl, coordinator of the Most Holy Name of Jesus Food Pantry.

Providing emergency food assistance to Chemung County residents who meet income requirements set by New York state, the pantry has been busier than usual this past year, Prechtl told the Catholic Courier in mid-March.

The pantry, which operates out of the Elmira parish, has received help in meeting increased demand from the state’s Nourish New York initiative, Prechtl said. In early May, Gov. Andrew Cuomo announced this new initiative would provide $25 million to help the state’s food banks and emergency-food providers purchase food directly from New York farmers and food-manufacturing companies, which suffered when markets for their products evaporated as schools and restaurants suddenly closed in the spring of 2020.

Locally, Foodlink and Food Bank of the Southern Tier used funds from Nourish New York to purchase fresh produce and dairy products from New York farmers. The food banks in turn made these items available to food pantries, which typically order at least some of their food from the food banks. The exchange enabled some food pantries, including the Most Holy Name of Jesus Food Pantry, to offer more fruits and vegetables than usual, Prechtl said.

“We have never had as much fresh produce as we have this year. I love the fact that we get fresh food from farmers,” she said. “It’s worked out great, and I hope that it has also helped the farmers out.”

The Elmira food pantry has distributed a lot of carrots and cabbage this year, and apples also have been a popular staple, she said.

The variety of produce made available through Nourish New York has been impressive, noted Ashley Kerrick, Schuyler director for Catholic Charities of Chemung and Schuyler. The agency’s Schuyler Outreach Food Pantry in Watkins Glen has been able to provide some typically less-available fruits or vegetables to families, she said.

“It’s especially nice for families with kids, to kind of open their eyes to the other things beyond the grapes, apples and oranges,” Kerrick said.

Before the pandemic struck, the Schuyler Outreach Food Pantry usually obtained most of its produce from the donated overstock of local grocery stores and from periodic donations from members of the community, she said. Donations from individuals in the community decreased last spring because of the pandemic, she added.

“Our private donations in regards to food were a little bit lower than usual, but our store donations kind of remained the same. The Nourish New York produce kind of kept us balanced,” Kerrick said. “It’s really opening up the ability for the food bank to obtain more fresh produce to supply our food pantries with.”

The Schuyler Outreach Food Pantry also has been able to offer a number of dairy products to families and individuals through Nourish New York, she noted.

The food pantry operated by Mary’s Place, a refugee-outreach center in Rochester, also has found dairy offerings through Nourish New York to be especially valuable, according to Matthew Palocy, the center’s program director.

Many of the refugees served by Mary’s Place live in urban neighborhoods without grocery stores, he said. Many such neighborhoods can be categorized either as “food deserts” — areas with very limited access to affordable, nutritious foods — or food swamps, where the availability of unhealthy options, such as fast food or junk food from corner stores, outweighs the availability of nutritious food.

“Through Nourish New York, we will get some dairy products that may be expensive or difficult to get in a food swamp or food desert like many of our clients live in,” Palocy said.