Food is part of the solution to end poverty - Catholic Courier 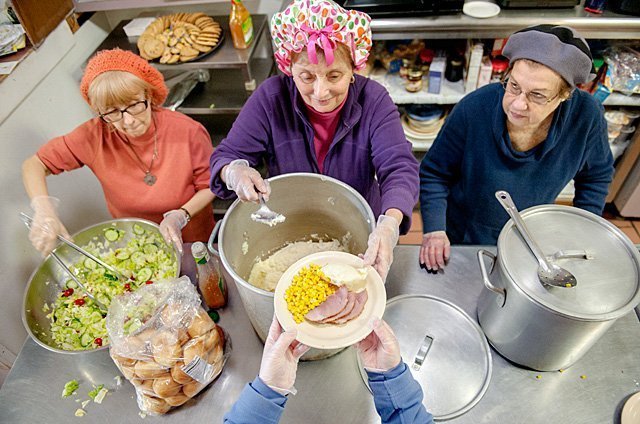 Whether it’s watermelons in California or a flatbed of cereal boxes in Buffalo, food manufacturers and growers frequently make free food available to food banks around the country

But there’s a catch, according to Natasha Thompson, president and CEO of Food Bank of the Southern Tier: The donations are offered on a come-and-get-it basis

If government funding to the agency is scarce or private donations are down, Food Bank of the Southern Tier may not be able to pay freight costs to procure such donations, even if they are desperately needed, Thompson said. Food Bank of the Southern Tier, a Catholic Charities agency, distributes 8.7 million pounds of food a year to 160 soup kitchens, food cupboards and other charities throughout six counties in the Souther Tier.

Distributing donated food is one of the ways social-services agencies address poverty among the people they serve, Thompson said, noting that food brings people to the table, both literally and figuratively.

When hungry people come to them for a meal, agencies can connect with them, address their needs and help them to stabilize their lives, she said.

“Food ministries are probably one of the best ways for people of faith to live out their values and to put their faith in action,” Thompson said, adding that this outreach comes across as being hospitable and life-affirming.

She noted that people often judge the poor for the choices they have made in life, and the shame of such judgment can create barriers that prevent people from seeking help. Food ministries can surmount such barriers because they are perceived as comparable to being invited over to a friend’s home for a meal, she said.

“If I invite you over to my house, I’m not trying to lecture you about how to live life better,” Thompson said. “It’s because I want to get to know you.”

And by getting to know clients and the issues they face, the food bank also is able to advocate for policy solutions that can better help the people it feeds, Thompson said.

“It’s our responsibility to help give a voice to people we serve every day,” she remarked. 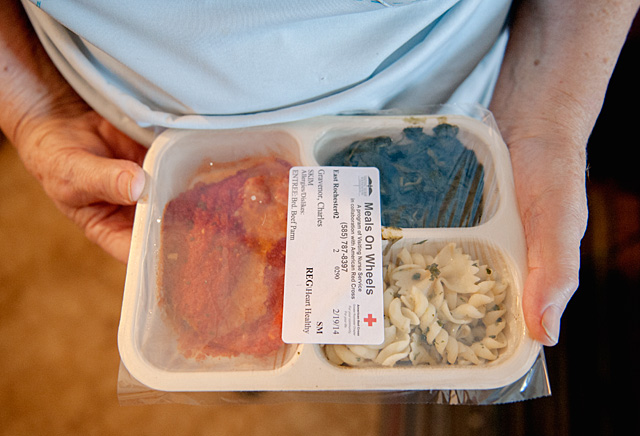 Charles Gravenor, 85, of Penfield lives alone and says he doesn’t get many visitors. Gravenor relies on Meals on Wheels to deliver food to his home.

Officials at Meals on Wheels of Monroe County find that providing meals is cheaper than addressing the consequences of letting people go hungry. They noted that more low-income elderly people could wind up in nursing homes if it were not for the nutrition in the meals their agency provides. Many meals can be provided for the cost of one nursing home stay, they noted.

Yet due to recent federal budget cuts, Meals on Wheels has had to cut back on the number of daily meals it provides to existing clients, and now has a waiting list of more than 100 people who need the service.

Federal funding cuts likewise are having an effect in such locations as Ontario County The Geneva City School District, for example, has had to reduce the number of children accepted into its backpack program, which sends backpacks of free food home with children to ensure that they will have something to eat over the weekends, according to Ellen Wayne, executive director of Catholic Charities of the Finger Lakes, which assists in the backpack program.

Food Bank of the Southern Tier likewise has seen reductions in its funding due to last year’s federal budget sequestration as well as the conclusion of several years of additional funding from the federal stimulus packages, Thompson said. She noted that funding continues to decline as the need continues to grow.

“We’ve reported about a 5-percent increase (in demand for food) at the end of the year as compared to last year,” she said.