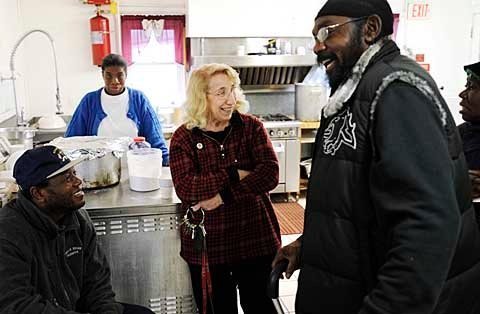 ROCHESTER — C.W. Earlsey had no home, no job and no access to public assistance when he first visited the House of Mercy not long after it opened in 1985. Perhaps most disturbing of all was that he didn’t know the source of his next meal.

He was far from alone. Recalling many of the ministry’s patrons during those early years, “There were mothers coming, saying, ‘I have no food and my children are hungry.’ They’re still saying it,” said Sister Grace Miller, RSM, the founding director who continues in that role today.

Such requests are never denied at the House of Mercy, located at 725 Hudson Ave. in northeast Rochester. Earlsey — who has served as house manager for 23 years — pointed out that food is made available there at any time of the day or night, whereas soup kitchens and supper programs in other parts of the city tend to offer meals at certain times and on certain days.

To support these acts of generosity, the House of Mercy was awarded a $1,200 Hunger Relief grant this past year. Hunger Relief allocations are derived in part from monies raised through the annual Catholic Courier/Catholic Charities Christmas Appeal. The appeal, in its 41st year, supports the emergency funds of Catholic Charities offices and affiliated agencies across the 12-county Diocese of Rochester.

Sister Miller acknowledged that such support is sorely needed by the House of Mercy. She noted that when it opened at its original location on Central Park, the ministry served approximately 600 people whereas 25 years later, that number has swelled to 4,000. This is done on a limited budget with heavy dependence on contributions of money, food and clothing from the public.

Sister Miller said corporate and community support enables the House of Mercy to provide Thanksgiving and Christmas dinners for its patrons each year, and also distribute sizable amounts of groceries at holiday time.

However, Sister Miller said she’d much rather see these folks have access to basic necessities year-round. Thus, she appears monthly before the Monroe County Legislature to plead her case for greater assistance, telling stories of how her people are suffering and bringing House of Mercy patrons to give personal testimony.

“It’s the system that really oppresses our people rather than helps them. What they tend to do is make life harder for the poor,” Sister Miller said, remarking that she continues to see fallout from the 1996 Welfare Reform Act that limited benefits while requiring recipients to go to work.

Meanwhile, the House of Mercy does its best to support those who are hungry, unemployed, sick, addicted and/or disabled. Despite the reasons that land patrons there, Earlsey observed that they share a unique sense of community.

“They might not have a bed. But they have a chair, TV, some conversation and a good cup of coffee,” he said.

Fellow staff member Rita Lewis, who has been with the House of Mercy since its inception, added that she feels right at home in her ministry because she’s truly with God’s people.

“It’s just so important to know God is here with us. This is where God would be,” she said.

EDITOR’S NOTE: Contributions to this year’s campaign will be accepted through February 28. Click here for a convenient donation form.