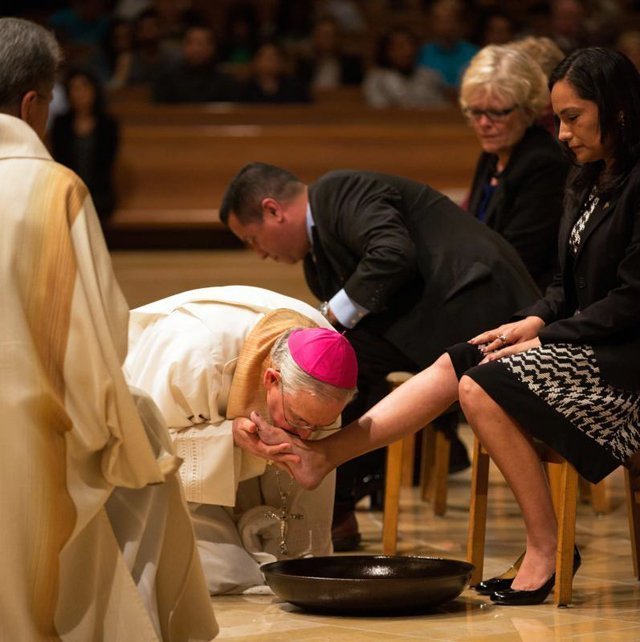 Los Angeles Archbishop Jose H. Gomez kisses the foot of a woman during Holy Thursday Mass in 2014 at the Cathedral of Our Lady of the Angels in Los Angeles. Following a request by Pope Francis, the Vatican issued a decree Jan. 21 specifying that the Holy Thursday foot-washing ritual can include women.
By Junno Arocho Esteves
Catholic News Service
VATICAN CITY (CNS) — Following a request by Pope Francis, the Vatican issued a decree specifying that the Holy Thursday foot-washing ritual can include "all members of the people of God," including women — a practice already observed by the pope and many priests around the world.
In a letter dated December 2014 and addressed to Cardinal Robert Sarah, the head of the Congregation for Divine Worship and the Sacraments, the pope said the rubric of the Roman Missal, which mentions only men as participants in the foot-washing rite, should be changed so that priests can choose from all members of the church.
The pope said the change would help express the full meaning of Jesus’ gesture at the Last Supper, his "giving himself ‘to the end’ for the salvation of the world" and his endless charity. However, the pope insisted those chosen be given "an adequate explanation of the meaning of the rite itself."
The pope’s letter and the congregation’s decree were released by the Vatican Jan. 21.
The decree, issued by Cardinal Sarah and dated Jan. 6, states that pastors can choose "a small group of the faithful to represent the variety and the unity
of each part of the people of God.  Such small groups can be made up of men and women, and it is appropriate that they consist of people young and old, healthy and sick, clerics, consecrated men and women and laity."
Jesuit Father Federico Lombardi, Vatican spokesman, told journalists that although traditionally 12 men were selected to represent the 12 apostles, the meaning of the rite signifies Jesus’ unconditional love. With the pope’s decree, he said, the pope wished "this dimension of the gesture of Christ’s love for all" be the focus rather than just a portrayal of the biblical scene during the Last Supper.
Archbishop Arthur Roche, secretary of the Congregation for Divine Worship and the Sacraments, explained the history of the foot-washing rite in an article published in the Vatican newspaper Jan. 21.
He said the rite has endured various changes and modifications throughout the church’s history. For example, the "mandatum" from 1600 said the custom was for bishops to wash, dry and kiss "the feet of ‘thirteen’ poor people after having dressed them, fed them and given them a charitable donation."
Changes made by Pope Pius XII were reformed again in 1970, further simplifying the rite and omitting the requirement that the number participating be 12. The significance of the current modifications, the archbishop added, "does not now relate so much to the exterior imitation of what Jesus did, but rather the meaning of what he accomplished, which has a universal importance."
"The washing of feet is not obligatory" during the Holy Thursday Mass of the Lord’s Supper, Archbishop Roche said. "It is for pastors to evaluate its desirability, according to the pastoral considerations and circumstances which exist, in such a way that it does not become something automatic or artificial, deprived of meaning and reduced to a staged event."
In 1987, the then-Committee on the Liturgy of the U.S. bishops’ conference explained, "The element of humble service has accentuated the celebration of the foot washing rite in the United States over the last decade or more. In this regard, it has become customary in many places to invite both men and women to be participants in this rite in recognition of the service that should be given by all the faithful to the church and to the world. Thus, in the United States, a variation in the rite developed in which not only charity is signified but also humble service."
Copyright © 2023 Catholic News Service, Inc. All rights reserved. Linking is encouraged, but republishing or redistributing, including by framing or similar means, without the publisher's prior written permission is prohibited.