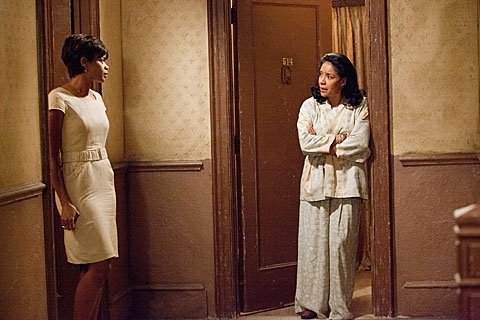 NEW YORK (CNS) — A good man is hard to find in writer-director Tyler Perry’s ensemble drama "For Colored Girls" (Lionsgate).
?
As well as allowing for only one positive male character in an unusually large cast, the misguided feminist values underlying his script also take for granted behavior quite at odds with Judeo-Christian sexual ethics, and hold out, as the sole source of hope for a series of embattled characters, the discovery of the "God-within-myself" and female solidarity.
?
This screen version of Ntozake Shange’s 1974 play, "For Colored Girls Who Have Considered Suicide/When the Rainbow is Enuf," shuttles among the lives of nine New York-based African-American women to present a downbeat exploration of the personal effects of numerous societal ills. The dialogue is studded with verbally impressive, but sometimes dramatically distancing, poetic set pieces.
?
The most prominent characters are successful but emotionally isolated business executive Joanna (Janet Jackson), Joanna’s harried assistant Crystal (Kimberly Elise), and lovelorn nurse Juanita (Loretta Devine). The personal lives of all three are in disarray because of the various problems — ranging from unfaithfulness to alcoholism — of the men in their lives. They’re portrayed, respectively, by Omari Hardwick, Michael Ealy and Richard Lawson.
?
As various characters endure rape, abuse and betrayal, Crystal’s repeated refusal to marry the father of her two children, with whom she cohabits, is presented as a wise precaution, given that he is an unemployed war vet in the throes of emotional turmoil and excessive drinking.
?
The middle course of not marrying, but also not living with him, never seems to occur to Crystal, despite the fact that his compulsive boozing frequently leads to violent attacks against both her and their children.
?
In between wrestling with the infidelities of her on-again, off-again live-in boyfriend, Devine’s character establishes a women’s health clinic in her Harlem neighborhood in New York. There, she is shown cheerfully recommending — and dispensing — that panacea of contemporary society, the condom.
?
Plot developments for other characters lead to a back-alley abortion and an extended discussion of a deeply concealed homosexual lifestyle.
?
The former is so harrowing that, while some viewers may interpret it as an implied argument for the current legalized status of this profoundly immoral practice, others may legitimately interpret it as reckoning on the horrific cost involved in any abortion, legal or otherwise. As for the closeted character, his behavior is presented as a profoundly disloyal deception, not as anything resembling liberation.
?
But — along with the actions the script does explicitly endorse — the skewed theology that leads to the climactic declaration: "I felt God in myself, and I loved her fiercely," is more consistent with the tenets of the New Age movement than with those of revealed religion.
?
The film contains a graphic rape, a scene of abortion, nonexplicit nonmarital sexual activity, fleeting rear and obscured full male nudity, incest, sex abuse and homosexuality themes, about a dozen rough terms, frequent crude and crass language. The Catholic News Service classification is O — morally offensive. The Motion Picture Association of America rating is R — restricted. Under 17 requires accompanying parent or adult guardian.
?
– – –
?
Mulderig is on the staff of Catholic News Service. More reviews are available online at www.usccb.org/movies.