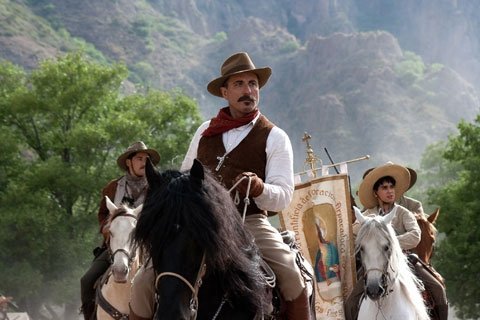 Such was the rallying cry of the Cristeros — devout Mexican Catholics driven into open, sometimes violent, opposition to their government during the1920s by its policy of persecution against the church. This pious exclamation also serves as the stirring refrain of the powerful historical drama recounting those events, "For Greater Glory" (ARC Entertainment).

At the center of director Dean Wright’s sprawling epic stand two remarkable figures: retired but restless military hero Gen. Enrique Gorostieta (Andy Garcia), a religious skeptic who becomes the unlikely commander of those taking up arms in the name of faith, and Jose Luis Sanchez (impressive newcomer Mauricio Kuri), a saintly adolescent volunteer in Gorostieta’s forces who, decades later, was beatified for his role in the struggle.

As early scenes reveal, Jose’s fervent belief was kindled by his interaction with his wise and venerable parish priest, Father Christopher (Peter O’Toole). When this forbearing clergyman falls victim to the anti-clerical campaign unleashed by President Plutarco Calles (Ruben Blades), Jose witnesses his spiritual mentor’s coldblooded execution and is radicalized.

Out to defy the government by peaceful means is another real-life character, also since beatified, Anacleto Gonzalez Flores (Eduardo Verastegui). A pacifist lawyer, Gonzalez is sometimes referred to as "the Mexican Gandhi."

A few passages of dialogue are devoted to debating whether violent means should ever be employed by Christians, and some viewers of faith may be unsettled by the sight of an early 20th-century crusade. But if the Founding Fathers of the United States were justified in their rebellion against British rule when it infringed on their rights (and pocketbooks), the Cristeros’ attempted overthrow of Calles seems, on the face of it, at least as well warranted.

The Mexican government’s tyrannical interference with religious liberty, while obviously far more extreme than anything taking place north of the border today, nonetheless carries a sobering resonance with current events. If the film can be taken as a cautionary tale about where excessively zealous, overweening secularism can lead a nation, the warning is a stark one.

The wide-ranging saga requires quite a bit of exposition, so that the proceedings, it must be said, get off to a slow start.

But once the initially varied story lines laid out in Michael Love’s script converge, their outcome packs an emotional wallop. In fact, moviegoers of a more sensitive disposition will be unlikely to escape without tears. It’s no spoiler to say that the phrase "heroic virtue" takes on a new depth of meaning when applied to Jose, who did not gain the honors of the altar by being a coward.

The sufferings to which Jose is subjected find their occasional counterpart in the intensity of the battle scenes. But the fact-based, faith-quickening tale the movie tells is sufficiently valuable to justify a younger viewership than would normally be advisable for fare of this kind.

So, despite the elements listed below, "For Greater Glory" is probably acceptable for mature adolescents — and may, indeed, do them a world of good.

The film contains considerable action violence with some gore, the torture of a child and at least one mildly vulgar term. The Catholic News Service classification is A-III — adults. The Motion Picture Association of America rating is R — restricted. Under 17 requires accompanying parent or adult guardian.