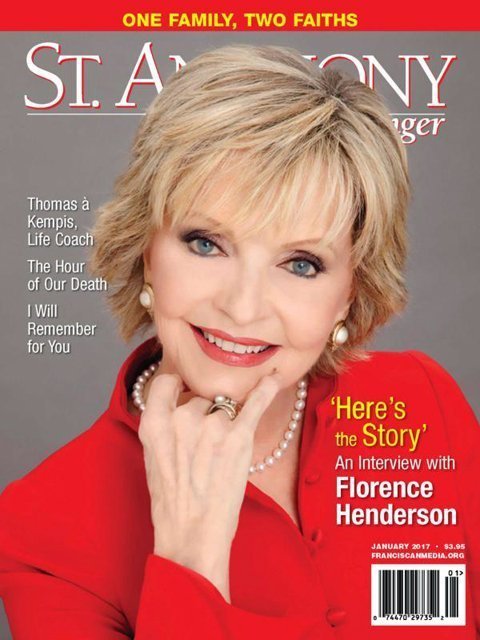 Actress Florence Henderson is pictured on the cover of the January 2017 issue of St. Anthony Messenger magazine. In what was her last interview before her Nov. 24 death at age 82, Henderson told the magazine that her lifelong Catholic faith was her foundation.

CINCINNATI (CNS) — In what came to be her final interview, actress Florence Henderson told St. Anthony Messenger magazine that throughout her life, through good times and bad, her Catholic faith was her foundation.

"I don’t ever remember not praying. Bedtime prayers, the rosary, praying for friends, relatives, for the sick and for those who had died. It was a natural part of our lives," she told writer Rita E. Piro, who interviewed the popular actress in August. The story appears in the January 2017 issue of the magazine, published by Cincinnati-based Franciscan Media.

Henderson, who died unexpectedly Nov. 24 at age 82, was best known for her role as Carol Brady in the 1970s sitcom "The Brady Bunch." Originally broadcast from 1969 to 1974, the program has never been off the air and has been syndicated in over 122 countries. It remains one of the most beloved and most watched family shows of all time.

"I frequently am contacted by people who want to thank me for ‘The Brady Bunch,’" she told Piro. "Whether they grew up during the show’s original television run or are brand-new fans of the present generation, they tell me how important ‘The Brady Bunch’ has been in their lives. I wanted to portray Carol as a loving, fun, affectionate mother, and it seemed to resonate with a lot of people who maybe had the same situation I did growing up. To think that something I was involved in had such a positive effect on the lives of so many people is satisfying beyond words."

Her most important role, though, she said, was Mom to her own four children — Barbara, Joseph, Robert and Elizabeth. "My children and their happiness have always been my greatest concern," she said.

She described her children to Piro as "the nicest people you could ever meet" and "very spiritual people."

"Being a mom makes you far more compassionate. You have more empathy for people, more love," Henderson added. I was always taught to say thank you and I’m very grateful. And my kids have that quality, too."

In the interview Henderson said that from time to time, she found herself questioning her faith, mainly in instances unrelated to her career.

As a new mother, the actress experienced repeated bouts of postpartum depression, Piro reported. During the mid-1960s, Henderson was diagnosed with a hereditary bone deformity of the middle ear and needed surgery to prevent deafness. Stage fright and insomnia also were present in her life.

"The loss of family and friends, especially her siblings, weighed heavily upon her, as well as a natural fear of her own mortality," said Piro.

Born the youngest of 10 children in tiny Dale, Indiana, across the Ohio River from Owensboro, Kentucky, young Florence later moved with her family about 25 miles away to Rockport, Indiana.

Piro noted that little Florence was a natural at singing from age 2, but she "had little to sing about" growing up with her nine siblings in extreme poverty during the Great Depression. "But that didn’t keep her from developing a deep love for her faith," which sustained her through life, Piro wrote.

Henderson was educated by Benedictine nuns and priests in St. Meinrad and Ferdinand, Indiana. (She had a priest in the family; her uncle, Jesuit Father Charles Whelan, taught constitutional law at Fordham University.) In the St. Anthony Messenger interview, Henderson talked at length about her first-grade teacher ?- Benedictine Sister Gemma.

After high school, with the help of a close friend and her wealthy family, Henderson was enrolled at the Academy of Dramatic Arts in New York City — which launched her long acting career.

She made her debut on Broadway as the star of "Fanny" in 1952. She played Maria in the original version of "The Sound of Music,” also on Broadway. She starred in several touring productions, including "South Pacific" and "Oklahoma!" She made numerous appearances on television, in film and live music shows.

Henderson’s last television performance was with Maureen McCormick (who had played daughter Marsha Brady) on "Dancing With the Stars" on ABC Sept. 19. McCormick was a contestant, and Henderson took part in a Brady Bunch-themed performance. Henderson competed on the show herself in 2010.

In a 1994 interview with Mark Pattison, media editor at Catholic News Service, Henderson lovingly recalled her role as Carol Brady and "The Brady Bunch" legacy.

She said that perhaps because of her wholesome image, parents approached her to ask if certain TV shows were good for their children to watch. "They’re responsible for this little soul they’ve brought into the world and they wonder what’s being taught,” she told CNS.

"Very few people in our business have been a part of something that everyone seems to feel with great affection. They really love the characters. They love Carol Brady, everyone in it. And that it’s still going strong after so many years absolutely amazes me,” she said.

The show "represents what everyone wants in life, and that is a loving family, unconditional love, a place to make mistakes, to get angry, to be forgiven, to forgive,” Henderson said.

Editor’s Note: More information about St. Anthony Messenger and how to get the complete article on Florence Henderson is available at www.franciscanmedia.org/source/saint-anthony-messenger.