For some Mideast Catholics, church is anchor of hope amid violence - Catholic Courier 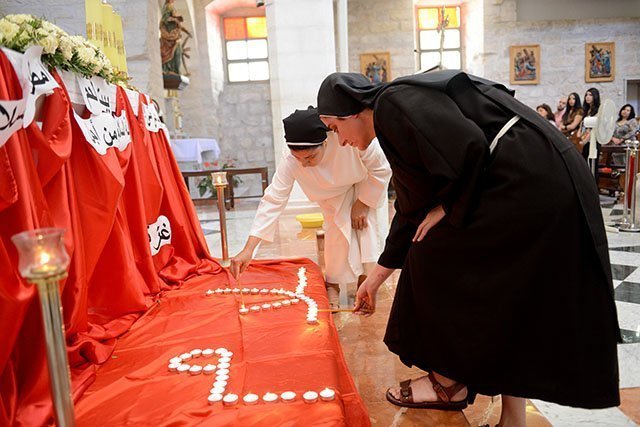 Catholic nuns light candles spelling "peace" in Arabic in front of the altar during Mass in the Church of St. Catherine in Bethlehem, West Bank, July 27. Parishes throughout the West Bank celebrated special Masses for Gaza, Iraq and Syria.

BETHLEHEM, West Bank (CNS) — As the death toll in Gaza surpasses 1,000, violent demonstrations in the West Bank leave dead and wounded, and an entire Christian community is exiled from the Iraqi city of Mosul by Islamic extremists, Christians in the Holy Land find themselves facing harsh realities.

For some Catholics, the church and its tenets serve as an anchor of hope.

At the Church of St. Catherine, adjacent to Bethlehem’s Church of the Nativity, parishioners spoke of the struggle July 27. That day, parishes throughout the West Bank celebrated special Masses for Gaza, Iraq and Syria.

"Christ tells us not to use violence. We try to raise our children to love each other. Sometimes you lose your mind and feel like you don’t know what to do, but we pray with our sons at home, and we come to church every Sunday to keep in touch with God. It is a safe haven. Violence is not our way," said Bethlehem resident Jamila Basha, 44, as she arrived at St. Catherine’s with her husband and two sons, ages 9 and 12.

"As Catholics, sitting here in church really comforts us. We are living Jesus on the cross, we are sharing in the pain of Jesus, this is the blood of Jesus," said her husband, Walid Basha, 47. "If I look at Israel, and at what is happening in Iraq and look at Hamas at the same time (I worry), that maybe if they could, they would do the same thing here (as the extremists in Iraq). Both of them (Israel and Hamas) are killing, both of them are violent. The hand of God is up above but Satan is doing his work down below."

The couple said that at home they talk to their sons about the nonviolent teachings of Christianity, keep TV news viewing to a minimum and spend time going on hikes and walks with them to keep them occupied.

"I always tell my boys that a God who asks his followers to fight is a weak God. Our God is strong enough to fight himself," said Walid Basha.

Samia Shahin, a mother of three grown children, noted that she has lived all her life in Bethlehem. She has lived through all the different moments of violence, she said, and she believes these moments are a symbol also of Jesus’s own suffering for people.

"It is not just in the Holy Land but in the whole world, you have to feel Jesus inside you, peace has to live inside you, not just with a cross on a building or around your neck," she said. "You have to believe it, live it and be a mirror for him so whoever deals with you knows you have Jesus inside.

"Each day I stand is a gift from God and I have to face it and live it, knowing at the same time there are people we are suffering more than me," she added.

To teach her children how to live in the face of violence, Shahin says she must mirror her Christian faith.

"If they see how you are living, even without words, you are like a mirror for them. They see that in our religion we put our faith in Jesus, in peace," she said.

In the West Bank village of Jifna, Father Firas Aridah of St. Joseph Catholic Church said he tries to show his young parishioners during summer camp that prayer and moments of silence while lighting memorial candles can also be a form of protest to the situation, bringing them spiritual strength without resorting to violence.

"In the Holy Land, as the mother church, we have to pray and hold the cross with joy, even in moments of death and destruction," he said. "If I bring more violence that does not mean I can win. No one will win. Violence begets violence."

He said he counsels his parishioners to act as a bridge, to love their neighbors even as they love God, even in periods of difficulty.

"If you do not love your neighbor, you do not love God," he said. The love and hope of Christianity must be kept in their hearts, he tells them, encouraging them to "act" but not "react."

He said none of the Catholic youth from Jifna was involved in the rioting in nearby West Bank city of Ramallah, which left eight dead in late July.

"They don’t have to throw stones," he said of Palestinians in the West Bank. "There is destruction in Gaza; I don’t want anybody to be killed here. (Israeli) soldiers have families, too. We don’t have to fan the flames (of violence)."

Nagi Sleiby, 25, of Bethlehem, said it has not always been easy for him to maintain his faith surrounded by the violence in the Middle East. He said his questions through prayer were answered by Jesus. He said he realized he must be thankful for what he has and help people in Gaza through nonviolent ways, such as prayer and donations. He also said he finds peace in prayer.

Both Israel and Hamas are fighting for peace through violence, and neither is perfect, he said. Having had the opportunity to meet with Israelis who also want peace has renewed and strengthened his faith, he said, and he feels that peace is possible despite the violence.