For this book, you win with 'Draw' - Catholic Courier 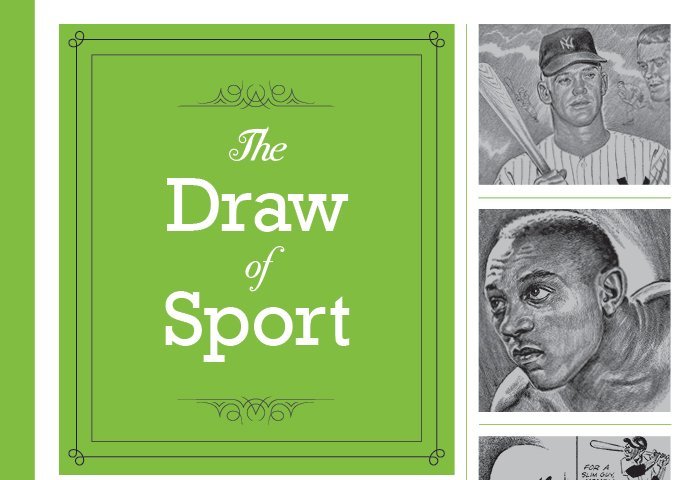 NEW YORK (CNS) — “The Draw of Sport” (Fantagraphics) is a delightful and historically valuable book. The retrospective is written and drawn by Murray Olderman, a pioneer and central figure in the golden age of sports cartoonists.

In the early to mid-20th century, before the rise of the internet, newspapers across the country employed a sports cartoonist. He or she would produce a portrait or action drawing of an athlete, garnishing the black-and-white likeness — in Olderman’s case, drawn with a conte crayon that gave his work a richness resembling that of charcoal — with stats and personal history.

Olderman, a writer as well as an artist, is still going strong at 95, even if newspapers don’t run sports cartoons anymore. “The Draw of Sport” is suitable for all ages, although the reading level is better suited to teens and adults than youngsters. Still, the quality of Olderman’s images might inspire younger children who can’t read yet to take up drawing.

Not a comic book in the strictest sense, it reprints some of his favorite works with anecdotes about his athlete-subjects on the opposite page.

As a kid in New York, Olderman used to flip straight to the sports section of the papers. He started drawing by copying his favorite cartoonists to learn to imitate their styles. “My work initially was rudimentary,” he said in a recent interview. “But over time, I developed my own approach.” His first drawings appeared in the Columbia Missourian while he was an undergrad at the University of Missouri.

In 1951, Olderman was hired by the McClatchy Newspapers of Sacramento, California, as a sports cartoonist. Olderman’s work appeared in 750 dailies for more than three decades. Additionally, Olderman takes credit for the idea behind the Jim Thorpe Trophy, for the National Football League’s most valuable player.

“The Draw of Sport” compiles 130 cartoons of sports personalities and, on the opposite page, memories of Olderman’s experiences meeting them. Among the athletes in the collection are Jackie Robinson, Joe Namath, Yogi Berra, O.J. Simpson, Muhammad Ali, Kareem Abdul-Jabbar, Billie Jean King, Ben Hogan, Stan Musial and Willie Mays.

As Olderman notes, before sports agents, public relations companies, embarrassing viral videos and high security, it was fairly easy to get close to your sports heroes. This often resulted in memorable encounters.

Some highlights: Olderman panned the autobiography of football great Jim Brown, then came face to face with Brown when the gridiron great was filming “The Dirty Dozen.” “I speak the truth,” Brown said to him. “If you deny me, you’re my enemy.”

Olderman on tennis great Jimmy Connors: “His on-court demeanor was mean-spirited, arrogant, self-centered, callous and insensitive in dealing with both his players and his fans. He was blatantly vulgar in some of his gestures.”

In a locker room after a boxing match, Olderman corrected legendary broadcaster Howard Cosell, who had misused the word “milieu.”

On Casey Stengel: “He was a calculating, cranky old man, a tyrant to his players. By manipulating the media, he craftily built an image of a kindly geriatric character engaged in double-talk.”

In 1966, Olderman asked New York Yankees pitcher Jim Bouton why the team was in ninth place. “I guess we just stink,” replied Bouton, who would go on to write the classic memoir “Ball Four.” Bouton was later forced to apologize to the team.

Pitcher Sandy Koufax “measured cities by the quality of their hotels’ room service.”

“The Draw of Sport” is a fun and beautifully illustrated book, perfect for easy summer reading while the ballgame is on in the background.