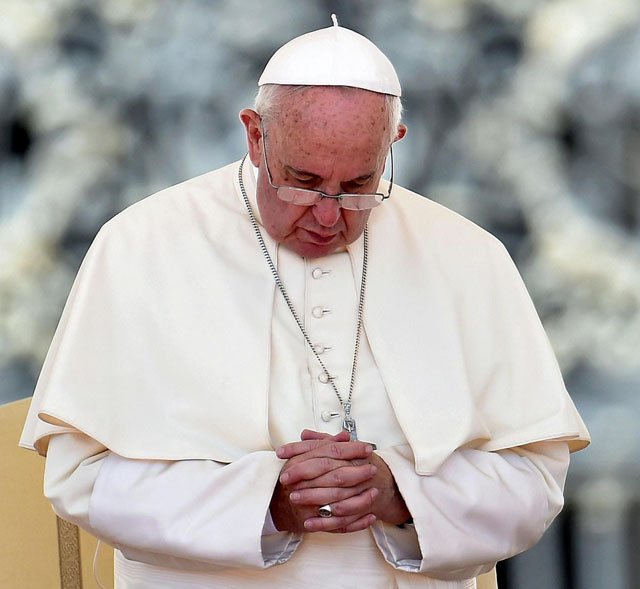 Pope Francis, seen praying during his weekly audience in St. Peter's Square at the Vatican Aug. 26, has issued a letter offering a series of instances in which absolution can be granted during the Year of Mercy.

VATICAN CITY (CNS) — In an extraordinary gesture for the Year of Mercy, Pope Francis has extended to priests worldwide the authority to absolve women for the sin of abortion and has decreed the full validity during the year of the sacrament of confession celebrated by priests of the traditionalist Society of St. Pius X.
"This jubilee Year of Mercy excludes no one," the pope wrote in a letter to Archbishop Rino Fisichella, president of the Pontifical Council for the Promotion of New Evangelization, the office organizing events for the holy year, which opens Dec. 8.
Pope Francis said one of the most serious problems facing people today is a "widespread and insensitive mentality" toward the sacredness of human life.
"The tragedy of abortion is experienced by some with a superficial awareness, as if not realizing the extreme harm that such an act entails," while many other women believe that "they have no other option" but to have an abortion, the pope wrote in the letter, released Sept. 1 by the Vatican.
The pressures exerted on many women to abort lead to "an existential and moral ordeal," Pope Francis said. "I have met so many women who bear in their heart the scar of this agonizing and painful decision."
When such a woman has repented and seeks absolution in the sacrament of confession, he said, "the forgiveness of God cannot be denied."
Although church law generally requires a priest to have special permission, called faculties, from his bishop to grant absolution to a person who has procured or helped another to procure an abortion, the pope said he decided "to concede to all priests for the jubilee year the discretion to absolve of the sin of abortion those who have procured it and who, with contrite heart, seek forgiveness for it."
Pope Francis urged priests to welcome to the sacrament women who have had an abortion, explain "the gravity of the sin committed" and indicate to them "a path of authentic conversion by which to obtain the true and generous forgiveness of the Father who renews all with his presence."
Jesuit Father Federico Lombardi, Vatican spokesman, told reporters the pope’s letter "highlights the wideness of God’s mercy" and is "not in any way minimizing the gravity of the sin" of abortion.
In his letter, Pope Francis also granted another exception to church rules out of concern for "those faithful who for various reasons choose to attend churches officiated by priests" belonging to the traditionalist Society of St Pius X. Although the society is no longer considered to be in schism and the excommunication of its bishops was lifted in 2009, questions remain over whether the sacraments they celebrate are valid and licit.
The pope’s decision was "taken with the faithful in mind" and is limited to the holy year, which runs through Nov. 20, 2016, Father Lombardi said.
The Society of St. Pius X responded with a statement later in the day thanking Pope Francis for "this fatherly gesture," but also saying that its members have been certain that the absolution they grant always has been licit and valid.
Father Lombardi confirmed that the Vatican’s contacts with leaders of the Society of St. Pius X have continued. Pope Francis wrote in his letter that he hoped "in the near future solutions may be found to recover full communion with the priests and superiors of the fraternity."
Pope Francis’ letter also explained expanded opportunities for obtaining the indulgences that are a normal part of the celebration of a holy year. An indulgence is the remission of the temporal punishment a person is due because of his or her sins. In a holy year, it is offered to pilgrims who cross the threshold of the Holy Door at the Vatican or in their local diocese, confess their sins, receive the Eucharist and pray for the pope’s intentions.
The celebration of God’s mercy, he said, is "linked, first and foremost, to the sacrament of reconciliation and to the celebration of the holy Eucharist with a reflection on mercy. It will be necessary to accompany these celebrations with the profession of faith and with prayer for me and for the intentions that I bear in my heart for the good of the church and of the entire world."
Those who are confined to their homes can obtain the indulgence by offering up their sickness and suffering, he said.
Pope Francis also included special consideration for people who are incarcerated, touching on the Old Testament tradition of a jubilee year as a time for granting prisoners amnesty.
Those who, "despite deserving punishment, have become conscious of the injustice they committed," may receive the indulgence with prayers and the reception of the sacraments in their prison chapel, he wrote.
"May the gesture of directing their thought and prayer to the Father each time they cross the threshold of their cell signify for them their passage through the Holy Door, because the mercy of God is able to transform hearts, and is also able to transform bars into an experience of freedom," he wrote.
Copyright © 2023 Catholic News Service, Inc. All rights reserved. Linking is encouraged, but republishing or redistributing, including by framing or similar means, without the publisher's prior written permission is prohibited.