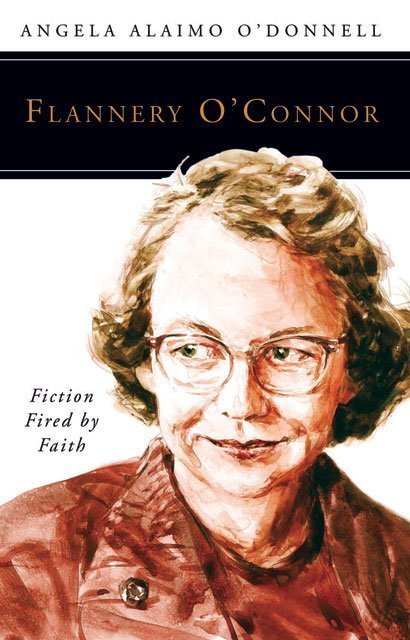 This is the cover of "Flannery O'Connor: Fiction Fired by Faith” by Angela Alaimo O'Donnell." The book is reviewed by Mitch Finley.
"Flannery O’Connor: Fiction Fired by Faith" by Angela Alaimo O’Donnell. Liturgical Press (Collegeville, Minnesota, 2015). 138 pp., $12.95.
When, in the late 1950s and early ’60s, Flannery O’Connor’s short stories and novels first began to attract the attention of Catholic readers, more than a few didn’t understand what she was up to. Since then, too, many Catholics remain perplexed by her bizarre characters and themes.
At the same time, it’s easy to find non-Catholic readers and critics who fail to understand how impossible it is to understand O’Connor’s fiction apart from her deeply held Catholicism. Angela Alaimo O’Donnell’s slim new book is just the ticket for anyone who wants to understand Flannery O’Connor’s stories and novels better.
In eight brief chapters, "Flannery O’Connor: Fiction Fired by Faith" presents both the story of O’Connor’s life and the story of how she became, O’Donnell writes, "perhaps the most celebrated American Catholic writer of the 20th century — and justly so."
Between her birth March 25, 1925, and her death from lupus Aug. 3, 1964, Mary Flannery O’Connor — her birth name — became, very possibly, that rarity, a deeply gifted writer of fiction who also valued and lived her Catholic faith deeply, too.
Indeed, she wrote about her faith — mostly in many of the hundreds of letters she wrote to correspondents both famous and ordinary — with such understanding, wisdom and, not infrequently, humor that her words deserve the attention of anyone who would cultivate a genuinely adult Catholic faith. (The primary source for the letters is "The Habit of Being," edited by Sally Fitzgerald.) "Only if we are secure in our beliefs," O’Connor wrote, "can we see the comical side of the universe."
O’Donnell teaches in the English department at Fordham University, and judging by this book her students are fortunate if they take from her a course on Flannery O’Connor. For she opens up the meanings intended by O’Connor in her fiction in ways that make it more accessible to the average reader who otherwise may be mystified by, for example, O’Connor’s great novel "Wise Blood." "In every one of her stories, the author writes, "the central character is, in some way, brought face to face with the presence of the divine in the physical world, even in the most mundane aspects of creation."
Anyone would do well, and will be richly rewarded, by reading this beautifully written and insightful book about a great American Catholic writer. Don’t miss it.
– – –
Finley is the author of more than 30 books on Catholic themes, including "The Rosary Handbook: A Guide for Newcomers, Old-Timers, and Those In Between" (The Word Among Us Press).
Copyright © 2022 Catholic Courier, Inc. All rights reserved. Linking is encouraged, but republishing or redistributing, including by framing or similar means, without the publisher's prior written permission is prohibited.