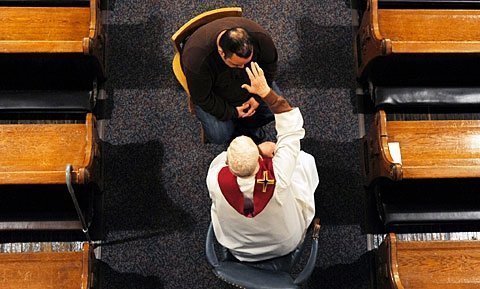 In this image from 2009, Father Laurence Tracy blesses a man after hearing his confession.

Most Catholics know they are called by God to forgive others as they are forgiven. What they may not realize, however, is that by forgiving others they actually may improve their own health.

"There is a direct correlation between unforgiveness and our immune system, which directly affects our healing processes," according to Dr. Michael Barry, director of pastoral care at the Cancer Treatment Centers of America in Philadelphia.

Barry began looking into this connection after learning that many patients undergoing cancer treatments also were dealing with forgiveness issues. In fact, 61 percent of patients at the Cancer Treatment Centers of America assessed themselves as having issues related to unforgiveness, and half of those people believed their issues were severe, he said.

When people hold onto and suppress such negative emotions as anger and hatred, those emotions cause a harmful state of chronic anxiety in their bodies, Barry said. And harboring bitterness, resentment and vengefulness can cause a host of physical disturbances, agreed Joseph Maxey, psychotherapist at Mercy Outreach Center, a health center that offers low-cost health and dental care to Rochester’s uninsured and underinsured residents.

Barry helps cancer patients work through anger and hatred and make the decision to forgive those who have wronged them. By doing so, these patients often boost their immune systems and thus their ability to fight cancer, said Barry, who created a program called "Release! The Healing Power of Forgiveness" to help patients move toward forgiveness. He recently authored a book on the same topic, titled The Forgiveness Project: The Startling Discovery of How to Overcome Cancer, Find Health and Achieve Peace.

Forgiveness is not a new concept for people of various faith traditions.

"All of the world’s religions value forgiveness, but only Christianity requires it," Barry said. "One of the things that makes Christians unique is how we treat people who have hurt us."

Jesus gave his followers explicit instructions about forgiveness in Matthew 18:21-22, Barry said. In that passage, Matthew recounts the story of Peter asking Jesus how many times he must forgive a person who sins against him. Jesus replied, "I say to you, not seven times but seventy-seven times."

At the end of that chapter is Jesus’ parable of a servant whose debt was forgiven by his master, but who refused to forgive his own debtors. At the end of this parable, Jesus urged his followers to forgive their brothers from their hearts. And earlier in the same Gospel, in Matthew 6:14-15, Jesus said, "If you forgive others their transgressions, your heavenly Father will forgive you. But if you do not forgive others, neither will your Father forgive your transgressions."

These Gospel passages form the Biblical basis for much of Barry’s work in the field of forgiveness and health, and they also help explain why many Catholics place a high priority on forgiving others, said Father James Jaeger, chaplain at the Veterans Affairs Medical Center in Canandaigua.

"I forgive because it’s commanded to me by the Lord himself. If I am a Christian and I intend to be faithful to my faith and religion and do as Jesus did, I will forgive no matter how hard it is because it’s necessary. Christians hopefully are doing it for the spiritual reason that we’re following the Lord," he said.

Faith often motivates Catholics to seek forgiveness for themselves, said Father William Endres, sacramental minister at St. Mary of the Assumption Parish in Scottsville and a chaplain at Rochester’s Strong Memorial and Highland hospitals. Father Endres offers the sacrament of reconciliation at the parish and at both hospitals, and noted that those who come forward to receive the sacrament at the parish often have different motivations than do those who receive it in health-care facilities.

"Usually in the parish context you have people that are trying to live the spiritual life. For the most part they’re not facing horrendous physical or emotional health-care issues, but they’re trying to follow the way of discipleship of Jesus and they want to reaffirm that, maybe on a monthly basis," Father Endres said.

Such people may be struggling with mistakes they’ve made, but they want to continue following Jesus’ example of forgiveness. People in hospitals, however, may not have been actively practicing their faith, and may have just received devastating diagnoses out of the blue.

"My interactions with individuals may be on a presurgical level, where they’re facing something that could be catastrophic health-wise, and yet they wish to take on their spiritual life," Father Endres said. "This health-care condition makes them aware of their need for wholeness or (spiritual) health."

"They’re all connected in our deepest selves or souls if you will. I think each one plays a role in our total well-being," he added.

Unforgiveness is an emotional wound that can affect an individual’s physical health, Barry said. The chronic anxiety caused by holding onto such negative emotions as anger and hatred spurs the human body to create adrenaline and cortisol. These two "stress hormones" can impair many of the body’s systems, including the digestive, reproductive and immune systems, he added. Adrenaline and cortisol also have been shown to reduce the body’s production of natural killer cells, which are the body’s "foot soldiers against disease," Barry said.

"Our bodies are less able to defend themselves from all kinds of diseases, including cancer. That’s the most direct link we have for how it affects our bodies," he said.

People who are suffering in the aftermath of traumatic and hurtful events can manifest a variety of symptoms, said Maxey, who volunteers his services at Mercy Outreach Center, a ministry of the Sisters of Mercy. A woman who is blindsided by a longtime spouse’s affair and decision to divorce her, for example, likely will be dealing with tremendous hurt. She may harbor resentment, bitterness and vengefulness, and those things will affect her physical health.

If the woman is able to work through her negative emotions, however, one might expect her sleep and diet to improve, he added. It’s very difficult to move forward and go beyond such negative emotions without first forgiving those who have hurt us, Barry said.

"Unforgiveness is a little bit like trying to drive your car with the parking brake on. It’s just really tough trying to move forward with this thing that’s holding us back," he said.

Forgiveness is a process that begins when an individual makes a conscious decision to forgive someone else, Barry added. It only ends when an emotional shift or change of heart has taken place, and the individual has let go of negative emotions, thus relieving the state of chronic anxiety.

Hospitalized patients occasionally experience physical healing after receiving forgiveness, often through the sacrament of reconciliation, Father Endres noted. Even when they don’t experience complete physical healing, they often feel a renewed sense of peace, he added.

"Family members might get a glimpse of this when they are sometimes asked to leave the room and then come back, and they will perceive that yes, even though their loved one is facing some serious treatment or scary procedure, they seem to be more calm and accepting of what is going on," he said.