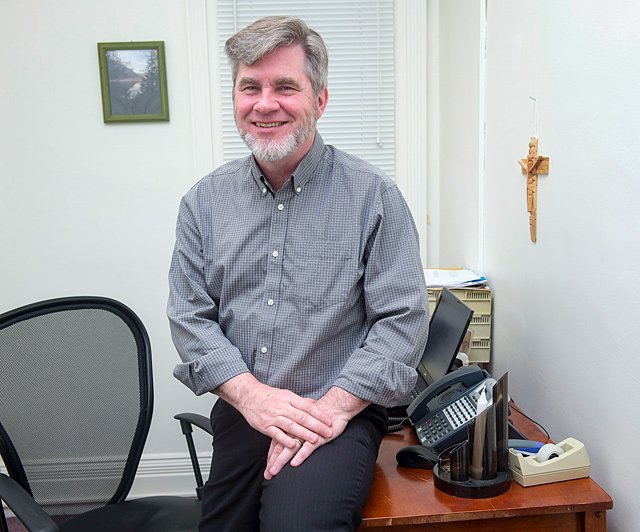 Deacon Gregory Kiley poses in his office at Catholic Charities of the Finger Lakes in Geneva April 26.

For most of his life, Deacon Gregory Kiley had not been one to become overly involved with politics or government’s inner workings. That all changed last June, however, when he became justice-and-peace coordinator for Catholic Charities of the Finger Lakes as well as Catholic Charities of Wayne County. Since then, he’s spent a substantial amount of time meeting with various legislators throughout the Finger Lakes region and encouraging them to oppose physician-assisted suicide.

The Diocese of Rochester’s Public Policy Committee chose opposition to physician-assisted suicide as the advocacy issue for its 2016-17 Public Policy Agenda, so in February thousands of Catholic parishioners throughout the diocese signed petitions and wrote letters demonstrating their opposition to any legislation that would legalize this type of suicide. Deacon Kiley has been visiting local elected representatives to make them aware of their constituents’ feelings on this issue and present those petitions and letters to them.

“Working with the legislators is different than anything I’ve done before, but I enjoy it. I think it’s really important,” Deacon Kiley said.

Deacon Kiley is no stranger to important work. He got his first taste of prison ministry more than 30 years ago, when he completed a two-month field experience at the Wayne County Jail while he was studying to become a permanent deacon for the Diocese of Rochester. That brief experience led to a 25-year career as a prison chaplain, first at Cayuga Correctional Facility and later at Five Points Correctional Facility in Romulus.

After he retired from the Romulus facility in 2014, Deacon Kiley continued to serve as parish deacon at St. Joseph the Worker Parish. He’d become parish deacon for St. John the Evangelist in Clyde and St. Patrick in Savannah shortly after his ordination in 1991 and later added responsibilities at St. Michael in Lyons when the three parishes clustered and eventually merged to form St. Joseph the Worker in 2012. After retiring from prison ministry he was able to both take on more responsibility at the parish as well as take some time to travel around the country visiting family. Deacon Kiley and his wife, Elena, have six children and 19 grandchildren, with another two grandchildren due to arrive within the next few months, so they had plenty of family members to visit, he said.

“This is kind of my retirement,” he added with a laugh.

As justice-and-peace coordinator, Deacon Kiley coordinated the procurement and delivery of the approximately 3,500 petitions and letters signed during Public Policy Weekend by Catholics in Yates, Ontario, Seneca, Cayuga and Wayne counties. He also meets with the pastoral leaders of the parishes in those counties and makes himself available to preach at those parishes if their leaders ask him to do so. He also has been involved with efforts to launch Family Promise initiatives in both Ontario and Wayne counties. These programs strive to help homeless families get back on their feet by providing both overnight shelter and meals — through the cooperation of local congregations — as well as a place to go during the day in order to search for jobs and receive case management and other services.

Deacon Kiley has helped parish and school groups learn more about poverty through the Just Neighbors curriculum, which was developed by Family Promise. He recently led Just Neighbors classes at St. Patrick Parish in Victor as the parish prepares to become a host congregation with Family Promise of Ontario County, and he has offered the curriculum in local schools and on college campuses, including Hobart and William Smith Colleges in Geneva. The goal of these Just Neighbors classes, he said, is to help people understand the issues, struggles and decisions faced by those who are marginalized, poor or homeless.

“It’s really just to get folks to see that poverty isn’t just not having money,” Deacon Kiley said. “Poverty is not so much that you live below a line, a dollar amount that the federal government sets. Poverty is really a matter of being stuck, where you don’t want to live that life but (can’t escape it).”

Deacon Kiley also is helping to coordinate a poverty simulation that will take place May 20 at St. Mary Church in Canandaigua, which is part of St. Benedict Parish. The role of justice-and-peace coordinator requires a fair amount of ecumenical interaction, he said, noting that he’s invited more than 200 non-Catholic congregations — as well as the local Catholic parishes — to participate in the simulation.

Deacon Kiley said he’s enjoyed his new role with Catholic Charities so far and has met some amazing individuals.

“One of the things that really surprises me, to tell you the truth, is how you will have people who have been involved in social-justice ministry for decades and they’re still faithfully doing it,” he said. “The ones who persevere in it are the ones who, instead of being upset about the way things are, have a certain joy about just being able to keep going in this.”