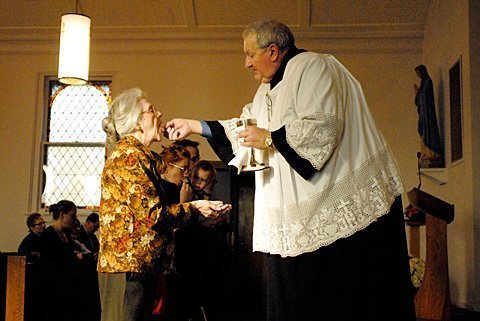 Prior to his ordination as a Roman Catholic priest Jan. 26, Father JohnCornelius of Almond had been serving former Anglicans who meet atGood Shepherd Church in Henrietta with the Fellowship of St. Alban.

HENRIETTA — After Buffalo Bishop Robert J. Malone ordained him to the Catholic priesthood Jan. 26 at Immaculate Conception Church in Wellsville, Allegany County, Father John Cornelius, a married father of three and a former Episcopal priest, said he felt a wonderful feeling wash over him.

"It was like 500 pounds were lifted off my back; I felt so much better," he said.

"It was a wonderful family event for us," said Sharyl Cornelius, Father Cornelius’ wife, who noted that the couple’s three grown daughters and other relatives were able to come in from out of town for the ceremony.

The next day, after a celebrating morning Mass in Cuba, N.Y., Father Cornelius then traveled about 90 miles northeast to Good Shepherd Church in Henrietta, where he celebrated Mass with the Fellowship of St. Alban, a community of current and former Anglicans and Episcopal parishioners, including several who have been received into the Catholic Church.

Father Cornelius serves as administrator of the Fellowship of St. Alban in addition to working as a pastoral associate with the Allegany County Vicariate in the Diocese of Buffalo.

Sharyl Cornelius has been and will be involved in the Fellowship of St. Alban; together she and her husband have started a Rite of Christian Initiation of Adults program with the community and are looking forward to weekly celebrations of 3 p.m. Mass at the Henrietta church on Sundays, she said. The Masses will be celebrated in full communion with the Roman Catholic Church.

"We have a core group of people, and we have been trying to get the word out," said Andrew Jordan, a member of the Fellowship of St. Alban.

During his homily Jan. 27 in Henrietta, Father Cornelius told the community that he would be focused on evangelism, and often may present activities to invite the wider community into the church.

Evangelism is what first introduced Father Cornelius to the Catholic Church. When he was 7, his Irish-Catholic friends would often bring him to Mass. He was ordained an Episcopal priest in 1990 and became Catholic in 2010. Sharyl Cornelius it didn’t come as a surprise said when her husband announced he wanted to become Catholic.

"That made sense to me from all we had seen and heard," she said, noting that the couple also was thrilled and delighted when they heard of the establishment of the ordinariate by Pope Benedict XVI on Jan. 1, 2012.

"Christian unity is our prayer," he noted.

Msgr. Steenson served as bishop of the Episcopal Diocese of the Rio Grande before being received along with his wife, Debra, into the Catholic Church in 2007. He said he is well-acquainted with Rochester, because his daughter did her medical residency at Strong Memorial Hospital.

He said one of his main goals with the ordinariate has been to preserve and foster unity with all Christians.

In addition to Father Cornelius, the ordinariate numbers 30 priests, more than 1,600 members and 36 communities across the U.S. and Canada. Two additional ordinariates are located in the United Kingdom (Our Lady of Walsingham) and Australia (Our Lady of the Southern Cross). Father Cornelius is the first priest to be ordained in New York for the personal ordinariate. He said he is grateful to Pope Benedict for establishing the ordinariate as a way to allow him to serve as a priest in the Catholic Church.

"I think Pope Benedict will be known as the pope of unity before it’s over," Father Cornelius said.

Although married, Father Cornelius received special Vatican permission to be ordained under an exception for former Anglican clerics to the rule of clerical celibacy. The church continues to restrict eligibility for the office of bishop to unmarried men.

However, Father Cornelius garnered national and international headlines for revealing in a recent television interview that he and his wife will be observing continence — abstinence from marital relations — upon his ordination as a Catholic priest. Continence is not required of married priests admitted through the ordinariate, but Father Cornelius said Jan. 27 that his pledge is part of his spirituality and is in support of fellow priests who maintain the discipline of celibacy.

"Everybody has a different individual spirituality, and it’s good to have diversity," he said.