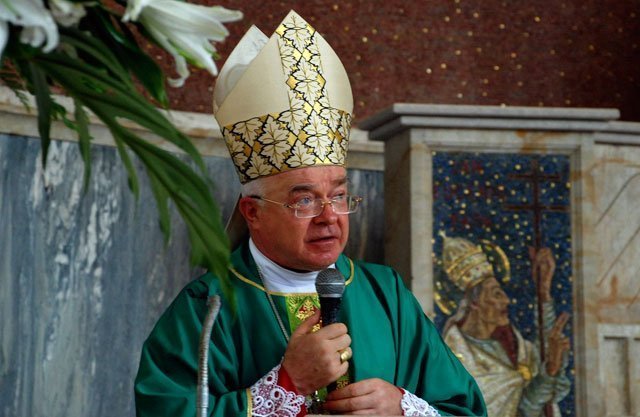 Archbishop Jozef Wesolowski, former nuncio to the Dominican Republic, is pictured celebrating Mass in Santo Domingo in 2009. He was found dead August 28 in his Vatican residence. He was awaiting trial on child sex abuse charges.
By Cindy Wooden
Catholic News Service
VATICAN CITY (CNS) — A Vatican official has ordered an autopsy on the body of former archbishop Jozef Wesolowski, who was found dead Aug. 28 in the Vatican residence where he was awaiting trial on charges of child sexual abuse and possession of child pornography.
Passionist Father Ciro Benedettini, Vatican spokesman, said Wesolowski’s body was found at 5 a.m. by a priest who also lives in the building, which houses the Franciscans who hear confessions in St. Peter’s Basilica and offices of the Vatican police force. Wesolowski was in front of a television, which was on, the spokesman said.
Officials from the Vatican police, medical service and court arrived quickly, he said, for an "initial verification, which indicated the death was from natural causes."
"The promoter of justice ordered an autopsy, which will be carried out today," the spokesman said. "The results will be communicated as soon as possible."
In the statement, issued less than four hours after Wesolowski’s body was found, Father Benedettini said Pope Francis had been informed.
The spokesman told reporters that Wesolowski had been in ill health and was under medical supervision at the time of his death.
Wesolowski was to be the first person to be tried by a Vatican criminal court on sex abuse charges. The first session of the trial had been scheduled for July 11, but was postponed when he was taken to the hospital the day before after suffering "a collapse," Father Benedettini said. He remained in the hospital until July 17.
The Vatican court had not announced a date for the continuation of the trial of the former Polish archbishop and nuncio — Vatican ambassador — to the Dominican Republic.
In its official statement about his death, the Vatican referred to him as "His Excellency Monsignor Josef Wesolowski," even though he was dismissed from the clerical state in June 2014 after an investigation by the Congregation for the Doctrine of the Faith.
His appeal of the dismissal was denied, Father Benedettini said, "but was not officially communicated so as not to aggravate the situation" while he was awaiting the separate criminal trial. He was still listed as an archbishop in the 2015 edition of the "Annuario Pontificio," the Vatican yearbook.
Before his criminal trial was postponed July 11, the Vatican prosecution read out the five charges against Wesolowski, which included having "corrupted, by means of lewd acts, adolescents presumably between the ages of 13 and 16," in the Dominican Republic, where Wesolowski had served as a Vatican nuncio from 2008 to 2013, when he was accused of abusing adolescent boys.
According to Vatican prosecutors, Wesolowski’s crimes continued once he was brought back to the Vatican. While being investigated, the court said, he procured and possessed on Vatican City State property "and elsewhere," a "large amount" of "material from Internet sites" depicting minors under the age of 18 in sexually explicit acts or poses.
He also was charged with causing "serious injury to adolescent victims of sexual abuse, consisting of mental distress" and of "conduct that offends religious principles or Christian morality" by repeatedly logging on to pornographic sites while in the Dominican Republic, Rome, Vatican City State and elsewhere.
Copyright © 2023 Catholic News Service, Inc. All rights reserved. Linking is encouraged, but republishing or redistributing, including by framing or similar means, without the publisher's prior written permission is prohibited.