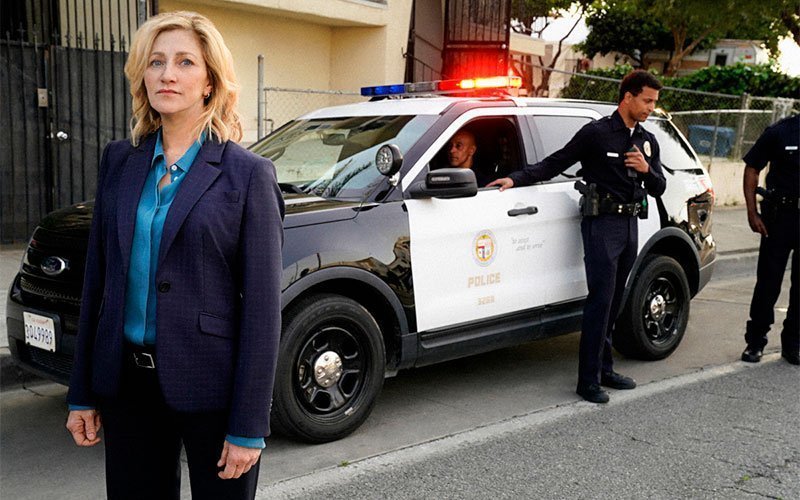 Veteran show runner Paul Attanasio (“Bull”) developed the midseason entry, which debuts Thursday, Feb. 6, 10-11 p.m. EST on CBS. It will air in that timeslot throughout its 13-week run.

In the pilot, the less-than-idealistic mayor of Los Angeles, Buddy Gray (Thomas Sadoski), explains in a video aimed at the electorate why he has hired the city’s first female police chief, Abigail “Tommy” Thomas (Falco). Namely, because a federal court order forced his hand.

Gray was compelled to act after LAPD officers were caught running a prostitution ring and Thomas’ predecessor, Milt Leakey (Corbin Bernsen, “L.A. Law”), was accused of sexual harassment by no fewer than eight women. Such a pattern of behavior, the court determined, could only be curbed by a female chief.

A veteran of the NYPD, Thomas is also a rape survivor. One plot line the series pursues concerns her attempts to overcome the skepticism of her new underlings. But, problematically, Tommy’s messy, complicated personal life also figures prominently in the story.

Divorced, Tommy is now out as a lesbian. She eventually moves in with her daughter, child psychologist Kate (Olivia Lucy Phillip), Kate’s husband, Henry (Luke Jones), and their preteen, Luna (Naledi Murray).

Tommy demonstrates her mettle in a series of cases. As she moves to protect Madison (Vayda Rodriguez), an undocumented adolescent girl caught up in a turf war between federal immigration authorities and the LAPD, her officers determine that Madison’s father, Arturo Lopez (Arturo Del Puerto), employed her mother, Maria (Andrea Londo), in a sex trafficking ring.

Since Lopez is one of Gray’s wealthy benefactors, this tawdry revelation poses new problems for the mayor. It also, naturally, complicates Tommy’s relationship with him.

On the upside, her sensitive handling of the investigation into an officer’s death by a self-inflicted gunshot wound earns Tommy Milt’s begrudging respect. He had previously been her harshest and most vociferous critic.   Tommy may deftly navigate the challenges presented by her work. But she is far from adept when contending with Kate’s issues, especially where Kate’s troubled marriage is concerned.   The values underlying the series are, from a scriptural perspective, a grab bag of the positive and the off-kilter. Thus, while its protagonist’s newly embraced lifestyle is, predictably, presented uncritically and without the moral discernment Catholic teaching would bring to her situation, other elements of the program are more ethically acceptable.

Commendably, for instance, “Tommy” embraces the view that women who are victims of sexual harassment, trafficking or assault deserve to be heard and supported. However, even in making this welcome and timely assertion, the program is so ham-fisted as to weaken its own argument.

When sexual assault survivor Tara Owens (Samantha Smart), for instance, is accused of murder, random women stand up in the courtroom in an overwrought and implausibly spontaneous display of solidarity. The lack of subtlety blunts the moment’s intended impact.

Besides the mature themes and situations already referenced, viewers will encounter the kind of violence usual for the genre. And characters sometimes employ off-color language.

Taken as a whole, “Tommy” makes for dicey programming that many grown-ups may wish to forgo. While they’ll be missing out on another fine turn from Falco, the unfocused, overly complex production within which it unfolds lags well behind her impressive performance.