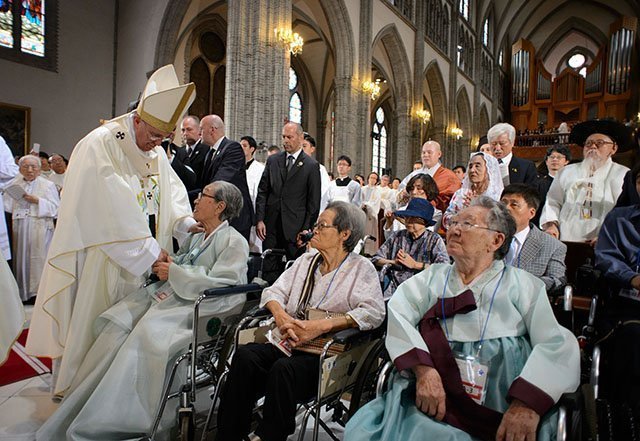 Pope Francis greets "comfort women" as he arrives to celebrate a Mass for peace and for the reconciliation of North and South Korea at Myongdong cathedral in Seoul, South Korea, Aug. 18. The women were sold into sexual slavery during World War II.

SEOUL, South Korea (CNS) — A day after Pope Francis left South Korea, a former sex slave who spent a few minutes with the pontiff said she still felt the impact of their meeting.

In an interview with Catholic News Service, Kim Bok-dong, 88, said through an interpreter she told Pope Francis she wished for "a world without war." And then she asked him to urge the Japanese government, "’Please apologize to the victims and then resolve the comfort women issues.’"

"And then I will fly like a butterfly," said Kim, who now lives in a women’s shelter in Seoul.

Kim was among seven "comfort women" who had a private audience with Pope Francis before his final Mass during his last day in South Korea Aug. 18. The women were forced into prostitution by the Japanese in the years leading up to World War II and also throughout the war.

She gave Pope Francis a gold-colored metal butterfly pin, and he promptly pinned it above his left breast and kept it there throughout the Mass. The pin is a symbol of the women’s call for justice.

She also said she told the pope that she wished the Korean peninsula would be "a peaceful nation," because if there is no war, there will be no chance for women to end up like she did.

When she was 14, Kim, who grew up in a farming family near Busan, was forced to work for the Japanese military. She said her family was threatened with being banished if she did not go into their service. Kim was a sex slave for eight years, and she never married because she said her body "was ruined" after what happened. Instead she worked her way up from being a waitress to restaurant owner when she was in her early 60s.

The first woman to come out publicly about being a sex slave gave Kim courage to do the same, and she has been a vocal activist ever since.

Kim has compared her "painful life" to that of a caterpillar in a cocoon waiting out the long period before it can break through its shell and fly away.

She said the pope encouraged her to keep up the fight, and she felt "very thankful" and was "deeply touched and very impressed" by him. She added she felt comforted by his embrace.

For nearly 25 years, Korea’s former "comfort women" have been demanding reparations from the Japanese government, holding protests every Wednesday in front of the Japanese Embassy.

In 1993, the Japanese government acknowledged military involvement in carrying out a system of prostitution, but it did not admit complicity in the system. The government created a women’s compensation fund that was funded by private entities and caused controversy, because some in government felt it was unnecessary while the women felt the government skirted its responsibility.

According to a women’s advocacy organization in South Korea, 54 former comfort women remain in South Korea. It said more than 200 Korean women officially registered with the government, although it estimates up to 200,000 Asian women were Japanese sex slaves. Women from several other countries such as the Philippines and Indonesia also were forced into prostitution during World War II.