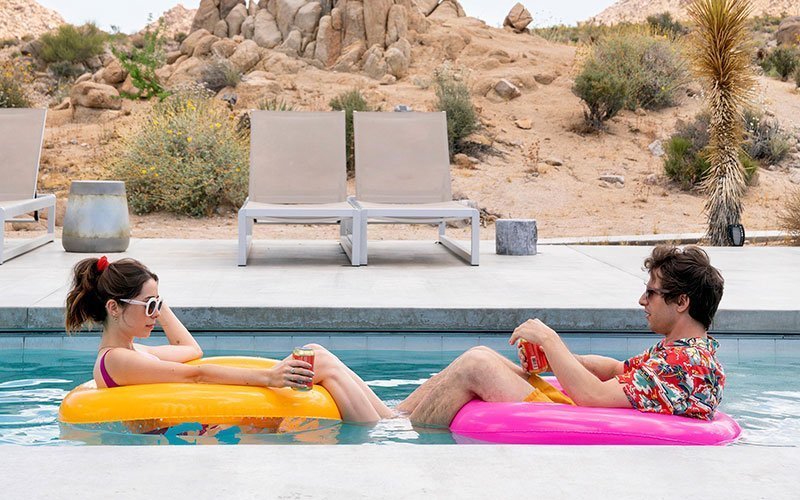 Cristin Milioti and Andy Samberg star in a scene from the movie "Palm Springs." (CNS photo by Hulu)

Helping to set the irksome, whiny tone is Nyles (Andy Samberg), the man-boy waiting to meet the girl. Although he’s to all appearances a slacker, Nyles also is inexplicably pleased with himself.

While attending a wedding in the resort of the title, Nyles meets the maid of honor, Sarah (Cristin Milioti), and the two are soon intent on a casual hook-up in the nearby desert. But their encounter is disrupted when, to Sarah’s bewilderment, Nyles is suddenly attacked by a man he calls Roy (J.K. Simmons).

Nyles crawls into a cave for shelter and, despite his warnings not to do so, Sarah follows him, anxious to help. What she and the audience then discover is that this cavern entraps anyone who enters it in a time loop. So, like Nyles and Roy before her, Sarah now finds herself forced to relive the day of the nuptials endlessly.

Like Roy, Sarah blames Nyles for her plight, though she mostly sticks to recriminations rather than resorting to violence. Once she calms down, Nyles does his best to guide Sarah through the rules and realities of their alternate world and the two gradually fall for each other.

Successfully blending the bleak and the breezy is a tall order, and “Palm Springs” fails to fulfill it. Unlike the similarly themed “Groundhog Day,” moreover, its take-away life lessons are thoroughly misguided.